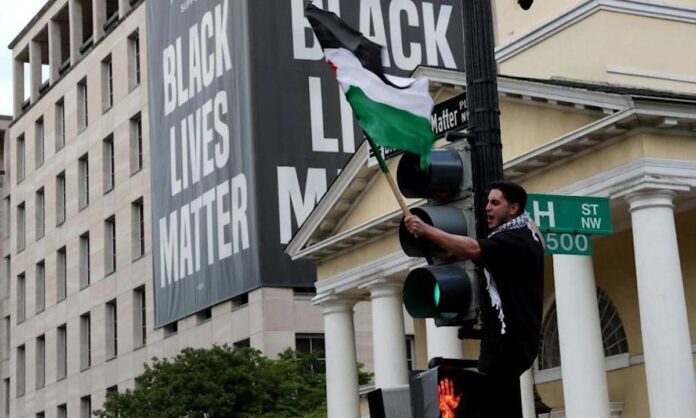 Palestinians and Israelis have seen some of the worst violence in years after Israeli settlers forcibly expelled Palestinian families from their homes in the Sheikh Jarrah neighborhood in May.

US news surrounding the region died down after Egypt brokered a ceasefire between Israel and Hamas militants, but with a new far-right, pro-settlement Israeli prime minister, Naftali Bennett, now assuming power, many US activists on the left are determined to keep a fire lit. And they are using the intersection of local and international causes to address state-sanctioned police violence across the borders.

Black Lives Matter, the US-based movement, recently came out in support of Palestinians’ fight for liberation.

Black Lives Matter stands in solidarity with Palestinians. We are a movement committed to ending settler colonialism in all forms and will continue to advocate for Palestinian liberation. ( always have. And always will be ). #freepalestine

On a cloudy Sunday in a New York City park, a group of local, leftist politicians gathered to lead a joint protest to defund the NYPD and end the billions of dollars in US aid to Israel.

The New York state senator Jabari Brisport from Brooklyn addressed the crowd in a fervent speech: “Whether it’s in Astoria, whether it’s in Brooklyn, whether it’s in Ferguson, whether it’s in the West Bank, we say: ‘Hell, no.’ The choice is made to spend money not on schools, not on housing, not on healthcare, not on transportation, not on childcare, but on oppressing marginalized people.”

The activist and former Women’s March co-chair Linda Sarsour, who is of Palestinian descent, made a surprise appearance as well.

“What’s happening in Palestine is apartheid. You cannot redefine apartheid for your own political interest,” Sarsour said. “The Palestinian people aren’t asking for favors from anybody. What we want is justice and freedom and liberation.”

“Protests against racist state violence in the US, under the Black Lives Matter slogan, have pushed organizers to draw parallels in the anti-racist, anti-colonial struggles that connect us all, from the US to Palestine,” a spokesperson from the BDS movement told the Guardian in a statement.

During the protests that erupted in Ferguson, Missouri, in 2014 following the killing of Michael Brown, another Black American killed by police, Palestinians gave advice to American protesters via social media on how to cope with teargas – something they knew all too well from living under Israeli occupation.

Solidarity with #Ferguson. Remember to not touch your face when teargassed or put water on it. Instead use milk or coke!

A Black Lives Matter activist who began protesting during the Ferguson unrest, Congresswoman Cori Bush made her position on Palestinians clear even before she entered politics.

The Black and Palestinian struggles for liberation are interconnected, and we will not let up until all of us are free.

Dr Ajamu Baraka is an activist, an associate fellow at the Institute for Policy Studies, and the spokesperson for the Black Alliance for Peace. In an interview with the Guardian from his residence in Colombia where he is fighting alongside protesters against unemployment and poverty, Baraka called the new conversations surrounding the Israeli occupation “one of the most interesting phenomenons that has developed”.

“I see a developing of a greater understanding of the connection between the colonial question. I think the authorities in the US and in Israel see this growing relationship between the so-called Black Lives Matter movement and the movement for the liberation of Palestine. And I think that they tend to see that is really becoming more predominant – the connection between the struggles of Black people, African people with the US and Palestinians in Palestine, Israel.”

The movement to liberate Palestinians has now been mainstreamed into US political discussions by a growing cluster of leftwing politicians that includes Bush, Alexandria Ocasio-Cortez, Rashida Tlaib, Ilhan Omar and Ayanna Pressley.

“Jews across this country and the world stand unequivocally and wholeheartedly in your quest for [Palestinian] freedom,” said Morgan Bassichis, a member of the Jewish Voice for Peace organization on Sunday in the park.

“We stand unequivocally and wholeheartedly in the movement for Black lives. Let me be very clear to Jewish institutions who would mischaracterize and weaponize and use … accusations [of antisemitism] to undermine and smear the movement for Palestinian freedom – that era is over.”