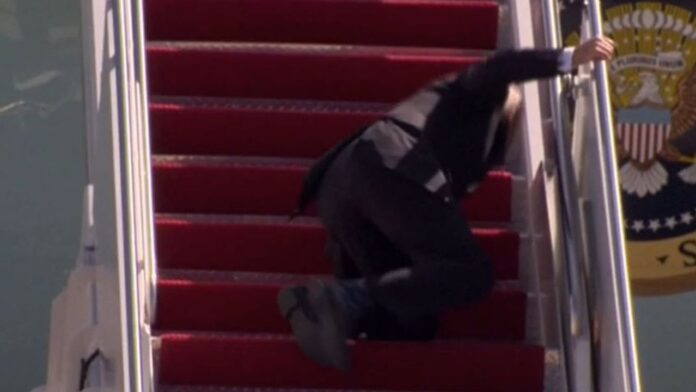 President Biden tripped and fell multiple times as he climbed the stairs to Air Force One on Friday as cameras captured his departure for Atlanta, where he and Vice President Kamala Harris were scheduled to meet with members of the Asian American community.

While Biden’s political enemies — including Donald Trump Jr. — were quick to point to the video of the president falling as proof of larger health issues, Rep. Matt Gaetz, R-Fla., noted that former President Donald Trump had spoken about the difficulty of traversing the stairs to Air Force One.

While numerous articles and news reports scrutinized Trump’s difficulties descending a ramp following his June 13, 2020, address at the U.S. Military Academy at West Point, and a political ad contrasted that footage with that of Biden bounding up a similar ramp when speaking at West Point in 2016, Trump stayed on his feet.

Biden is not, however, the first president to take a tumble on the steps to Air Force One. Gerald Ford, whose clumsiness was mocked in skits on “Saturday Night Live,” is considered the most athletic president in the nation’s history. Yet the former football player, swimmer, runner and tennis player also fell prey to the Air Force One staircase on June 1, 1975.