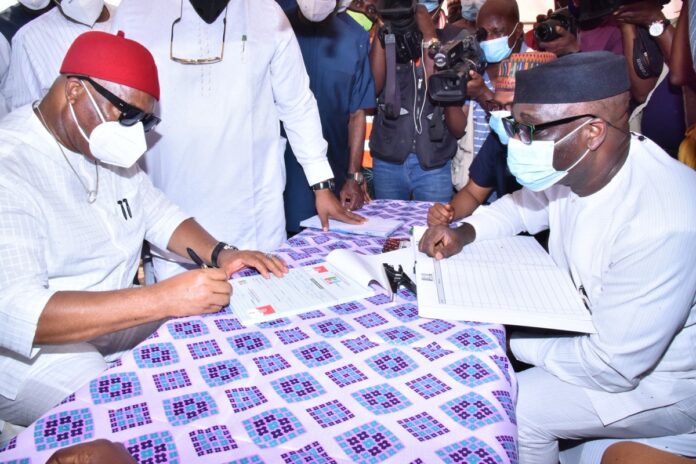 Carrying out the revalidation at Omuma Central School Boot 006, Governor Uzodimma said that he had come to perform a responsibility put on the shoulders of all APC members and intending members by President Mohammadu Buhari,  mandating all to register/revalidate their membership with the party as a way of knowing who is who and who belongs where in APC as a party.

Performing the ceremony before his people in Oru East Local Government Area, the Governor encouraged every member of Omuma Community to endeavour to come out and register as well as revalidate and ensure that they come first in the Local Government as it will be a pointer to other communities in the LGA to register with the party.

The Governor who did not mince words in emphasizing that APC is the party to follow, assured his people that the days of darkness are over and that with his relationship with the presidency, “all dividends of democracy due to Imo State will come to them.”

He promised to fulfill all expectations of his people and that of Imo State in general, urging all and sundry to ignore campaign of calumny on him and the party. He assured them that “the future will vindicate the just.”

He further appealed to his people and Imo State in general to troop out and register/revalidate as well as support APC and the Shared Prosperity Government in Imo State.

He urged Omuma people, the Oru people and the entire people of Imo State to endeavour to register and revalidate their membership of APC so as to encourage and support the Governor to continue in his administration in Imo State now and in future.

Chief Nlemigbo promised that the party (APC) will encourage the ward that records the highest membership of APC members with a mouth-watering gift yet to be determined.

Also addressing the audience,  the Chairman of the Registration Committee in Imo State,  Barr. Godwin Anaughe informed that the exercise is very important because at the end of the day the membership of the party in Imo State as contained in the register will be instrumental to most activities of the party in the state and the country in general.

He went further to stress that the registration and revalidation as directed by the National Working Committee of APC demands that every member or intending member must go to his unit to carry out the exercise and that is why the Governor has to go to his own unit at Central School Omuma ward to do his revalidation.