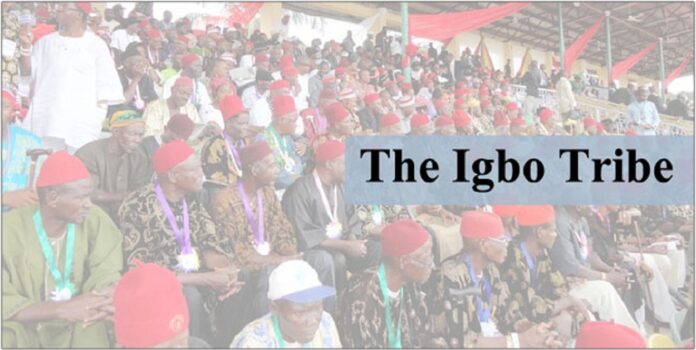 At the close of the year 2020, there are three organisations that are conspicuously at the forefront in the cause of the wellbeing of the Igbo race. The organisations are Indigenous People Of Biafra (IPOB) headed by Mazi Nnamdi Kanu,  Alaigbo Development Foundation (ADF) led by Professor Uzodimma Nwala and Igbo World Assembly (IWA) led by Dr Nwachukwu Anakwenze who is also the Traditional Prime Minister (Onowu of Abagana). In recent times the trio have made great impact in drawing the attention of Ndigbo on how best to deal with the challenges facing Ndigbo from the Nigeria scene.

IPOB for instance has succeeded to bring a lager chunk of Ndigbo together like never before in the history of the Igbo race. IPOB is the largest indigenous organisation in the world today with branches all over the world. The reality now is that IPOB is on cause that calls for everybody in Igboland to identify with. Following what the founder and leader of IPOB is saying and doing, there are two key notable things that IPOB wishes to achieve and they are: to disconnect Ndigbo from the failure of Christianity and and disconnect them from the failure of Nigeria. Moving with the cognisance that Ndigbo originated from Israel, the leader wants to see Ndigbo connect with Judaism which is the kind of religion they largely practice in Israel.

Many frankly agree with Kanu to a large extent that Christianity according to the way they practice it in various Churches as the Catholic, Anglican, Pentecostals and others is a failure and disappointment to Ndigbo but we must admit that the task to disconnect people like Ndigbo from the Churches is arguably the strongest task anybody could undertake on earth. Ndigbo are so deep into Christianity that they are not ready to listen to anything on the contrary to what they hear, know and do in their respective Churches.

Before proceeding further, permit me to elaborately identify some areas on the failure of the Christianity to Ndigbo. First is that Christianity through the Churches is driving Ndigbo on a failed system of human based leadership. In some cases, people argue that Igbo people do not have a king or kings at different levels as obtained in other tribes. Yes, it might be true that Igbo people do not believe in kings socially and traditionally but religiously Igbo people have kings. Church leaders such as the Bishops, the Parish Priests, Vicar, the General Overseers, the Pastors and Prophets are kings to Ndigbo. Ndigbo upon all their education, exposure and riches follow religious leaders including illiterate pastors and prophets sheepishly. Today in Nigeria Ndigbo are arguably the highest Church donors and benefactors in various Christian Churches we have in the country.

An average Igbo businessman might not be interested to know what is happening in his community and his local government area to the extent that he doesn’t even know the name of the traditional ruler of his community and the name of his local government Chairman but he is committed to the affairs of his Church 24hours putting money and doing everything according to the order issued by the Church leader who acts like a king. Unfortunately some Church leaders who act exactly like kings do not have the capacity to lead. They do not even know what is happening in the government quarters and the business world. They are not sophisticated and exposed enough to lead people in the highly sophisticated world and yet Ndigbo are their strongest loyalists.

Second, the Churches do not have universal intelligence, thus they do not have the ability to look ahead, see ahead and know ahead to be able to beat rivals, overcome temptations and undertake encompassing set goals capable to make positive impact on the lives of the adherents in particular and the system in general. Third, the Churches do not have adventurous capacity needed to respond to the needs of the people in all sectors of life and governance mostly security and economy. These crop of Churches are transcended in a narrowly stereotyped services limited to raising money to build cathedrals and schools. They are not interested in building political process, building farmland and industries instead they confine people to continue to expect miracles by following the leaders sheepishly.
The reason for the failure of the Christian Churches from the general point of view is because the Church leaders believe that their work is limited to connecting people with God and by so doing they are entitled to receive offering, thanksgivings, tithe and donations on behalf of God. Most Church leaders believe that it is the responsibility of those in government to ensure a better society with tight security and booming economy. While they expect government to provide everything including food in abundance, they rake money from the adherents and lavish the money on personal needs and projects that have no security and economic values. This is why Christianity has not been able to give Nigeria in particular and the world at large a good fight.
Time has come for Christians to quash all the negative factors militating against Christianity and come up with stronger system capable to fight the ills of the world for the interests of humanity. One major thing that Christians and those who intend to be Christians should know is that Jesus Christ is standing as a source of direct automatic connection with God for man. Anybody who accepts Jesus Christ as Lord and Savior automatically has a direct connection with God. All those Bishops, Priest, Pastors and others controlling Christians are dwelling in ignorant. In Matt 3:17 it is written that God is well pleased in Jesus Christ. And in John 3:16 it is written that God gave His only begotten Son that whoever believe in Jesus Christ shall not perish but have everlasting life. More so in John 1:12 it written that those believe in Christ to them is given the spirit not bishops, not pastors nor prophets to become the Sons of God

In Matt 20:27-28 Jesus described Church leaders as servants not kings. “And whosoever will be chief among you, let him be your servant: Even as the Son of man came not to be ministered unto, but to minister, and to give his life a ransom for man” Christian converts need someone who can assist them to learn what is written in the Bible, teach them how to pray and to know how the Holy Spirit operates in one’s life not a king who exercise dominion over them. Thus what the bishops, pastors and other titled Church leaders have to do is to orchestrate a new life for converts as regard the need for coverts to discover a new system of life different from the system they had before accepting Jesus Christ as their Lord and Savior. In 2Corrinthians 5:17 the Bible says that anybody that accepts Jesus Christ has turned to a new creature because the person has separated from old things about his life

Having identified the areas of the failure of Christianity on Ndigbo, it is clear to say that Kanu’s push towards connecting Ndigbo with Judaism is justified. Kanu too is a religious leader and from what he has done so far, he has shown with proof that he is more of a servant than a king and more adventurous than Church leaders. As noted earlier, it is not possible to disconnect people from the Church, but it is possible to engineer them into more useful and more effective services. The President of Alaigbo Development Foundation (ADF) Professor Uzodimma Nwala is doing a good job by mobilising Church leaders and sensitising them on the need to identify with the struggle for a better Igboland and they are yielding. A popular Church leader in Enugu by name Bishop Obi Onubogu is into the struggle long before now as the Chairman of ADF Board of Trustees and a trusted ally to the ADF President.
Professor Nwala is championing an Igbo leadership built on intellectual skills, think home philosophy and domestic structures like the Church and the town unions. Politically, Nwala is more interested in strategic movements, diplomacy and negotiations. The ADF boss is also interested in self determine for Ndigbo but he wants it from a round table via diplomatic approach. More interesting is that ADF is practically championing think home philosophy and a revolution in agriculture as according to the group, agriculture is the source of food security and job creation. ADF is pushing for Agricultural Revolution that combines Food Security with Physical Security, Youth Empowerment with Youth Cultural Re-orientation.
In a bid to lead by example Nwala has dragged the ADF think home philosophy also known as Akuruo ulo to his native home of Mbaise, a popular clan in Imo State. Speaking on the Akuru ulo and agriculture revolution at a function in his country home of Mbaise Nwala said “The AKURUO ULO MOVEMENT which ADF initiated in 2015 in Alaigbo has finally taken a revolutionary turn. And hopefully, in the next one year we shall cut food importation in Alaigbo by 50%. And within two years we shall totally eliminate food importation. That is the goal of this new movement”
As earlier noted, IWA is also at the forefront of the Igbo struggle agitating for the protection of Ndigbo anywhere they are in Nigeria and for Ndigbo to be given their fair share of the national cake. Currently IWA is at the forefront for the actualisation of Nigeria President of Igbo extraction. According Dr Anakwenze, Ndigbo have enough capable hands that can lead Nigeria as President and considering the fact that other geopolitical zones as the North, Southwest and Southsouth have taken their share of the seat in ASO Rock it Is the turn of the Igbo to produce the next President of Nigeria come 2023 election.
Clearly, IPOB, ADF and IWA are pointing to the future of Ndigbo fully loaded with strong packages. What they need from Ndigbo now is collaborations. The ADF vision of using the domestic structure like the Church and town unions is a master piece. Churches have to make themselves available for service outside the cathedral and go out to do farm work, social work as well as political work. For instance, Alaigbo still need cleansing, liberation from errors of the past and protection against blood thirsty invaders. It is the duty of the Churches to carry out strong prayers for cleansing and protection of Alaigbo against invaders. In Psalm 127 the Bible tells us that God is the chief security of every human community, so it is the responsibility of the Church to draw God’s presence for security of lives and property of Ndigbo. Let the Churches collaborate with the town unions to carry out prayers of cleansing and protection of Alaigbo in Jesus name.
Ndigbo have to use the town unions to mobilise into think home philosophy as well as the struggle for Igbo Presidency in 2023. The job of a town union is not about selling land and collecting revenue from motor parks and markets it also involves reaching out to the indigents on the need to participate in the affairs of the town. Everyone is connected with a community and thinking home makes people to be available for the services of their father land. It is therefore very important for every town union in Igboland to reach out to their sons and daughters for the purpose of think home services. A large quantity of Ndigbo are stockpiled elsewhere around the world to the detriment of the strength of Ndigbo as a people, thus there is need for Ndigbo to join hands with ADF to effectively champion the think home drive.