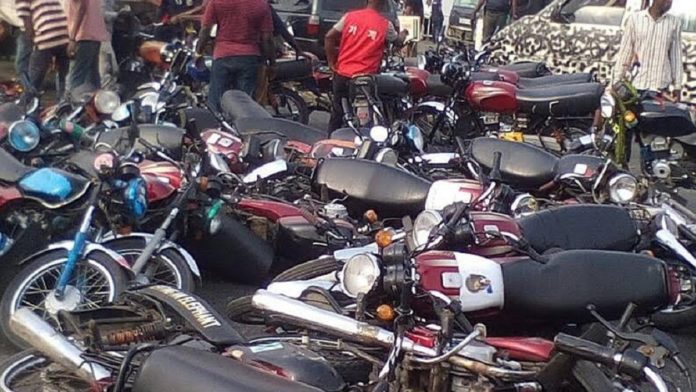 Following the ban on use of motorcycles and illegal revenue check points in parts of Sankera, that is Katsina Ala, Logo and Ukum Local Government Areas of Benue State by the State Security Council: residents have complained of untold hardship in carrying out their daily activities.

Head of Organization For Youth and Women Aid In Africa (OFYWAIA), a Non Governmental Organization that sensitizes rural farmers on the need to practice commercial agricultural, Miss Nguumbur Ngigh has lamented the near collapsed of social and economic life of the people of Sankera following the banned on their most principal means of transportation, motorcycles.

‘We use motorcycles for going to our farms that are always far away from our homes.

‘It is same means that we employed in conveying farm produce to the markets and attending social and religious events but with the proscription since Tuesday 29th December, 2020: we are going through tremendous challenges of movements of human, produce and goods, she complained.

Corroborating the views of Ms. Ngigh, a yam farmer, Mrs Hundekera Tor, an Okada operator, Terfa Tseaa, also said the ban has made them to suffer.

Mrs Tor said thus: ‘ I can’t sell my yams now to get money for drugs. Where will I get money to get a motor vehicle to transport my yams to Zaki Biam market?, she moaned.

‘As an okada operator, I make between two to four thousand naira every market day, but since the ban, I have not gotten five hundred naira, he lamented.

1. The use of motorcycles is hereby banned in Katsina-Ala and Ukum Local Government Areas, till further notice.

2. The use of tricycles also known as Keke and other means of transportation apart from motorcycles will be allowed in the two local government areas.

3. Security operatives have been mandated to arrest defaulters and impound their motorcycles.

4. Aside the revenue collection point at the head bridge in Katsina-Ala, no other revenue point is allowed within the local government area.

5. All staff of the Board of Internal Revenue Service, BIRS are required to wear customized jackets and identity cards.

6. Security agents are mandated to dismantle all illegal revenue collection points and makeshift shops. In the same vein, loitering at Katsina-Ala head bridge is prohibited.

7. Loading and offloading of vehicles at Takum Junction and Katsina-Ala head bridge has also been prohibited.

8. Law abiding residents of the affected areas are advised to go about with their normal activities without fear.

The statement was signed by Uyina Matthew D., Permanent Secretary,