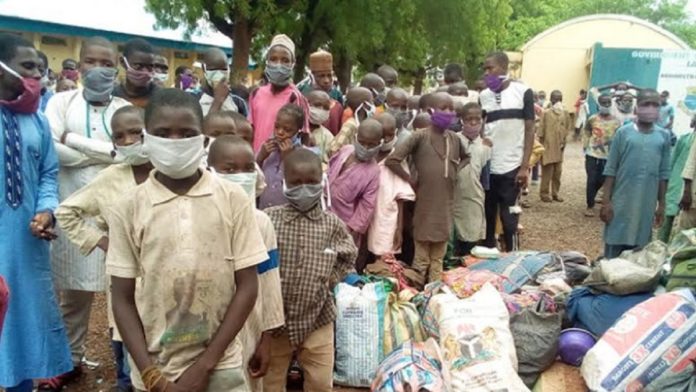 The Federal government  has expressed that it is willing to partner the northern governors in the process of ensuring that the children are given a smooth transition from the Almajiri system to formal education.

Special Adviser to the President on Social Investments, Hajiya Mariam Uwais stated this today Sunday in Gombe during a meeting with traditional rulers,community leaders and stakeholders on tsangaya education and out of School  Children in Gombe.

Uwais said the initial plan was to ensure that proper data is generated so that the children would be kept in a school environment for about six to nine months and be given intense basic education and skills to enable them fit into the new perspective, which will prepare them for the classroom and formal school system.

Adviser said the children will learn literacy ,numeracy and entrepreneurship and vocational education.

Uwais said  that those who are a bit older and may want to go into trade and other vocations will also be trained to do that.

She said  taking care of such Schools is the responsibility of the states Governments but the Federal Government is willing to assist in order to give these young children a brighter future.

State Programme Coordinator of Better Education and Service Delivery for All BESDA Dr Abdullahi Bappah Ahmed Garkuwa explained that not all children you see on the streets begging are almajiri.

Dr Garkuwa said research carried out has shown that over 70 percent of people begging are not almajiri learning the recitation and memorization  of Quran.

Coordinator said tsangaya Education is an institution of it self that only need genuine support to succeed.

He said with the support of Gombe State Governor over 200,000 out of School children have returned to classrooms under BESDA programme.

Dr Garkuwa stressed the importance of the programme which will improve the living standard of young ones and advised all stakeholdersto support governmenton its laudable programmes.

Some of the stakeholders that spoke at the occasion  Dr Muhammad Mujitaba Abdulkadir Secretary of  Council of tsangaya schools  in Nigeria and Head of a renown Islamic Scholar Sheikh Sheriff Ibrahim Saleh tsangaya schools Dr Ahmed Awwal Adam Assudaniy said government  can do little support to tsangaya schools and makes it model so that the schools can produce well learned pupils in both western and Education schools.

Dr Mujitaba said the tsangaya Schools need toilets,feeding and accommodation “we have wrote over 15 articles to the Federal Government on almajiri Education.

Dr Ahmad said they established he visited different tsangaya schools across the world he saw the kind of support given to tsangaya schools in Morocco,Sudan, Pakistan, Bangaladeshi, Malaysia and many others and presently there Establish a model tsangaya schools with Hospital and vocational centers.

The scholars urged Government to support tsangaya Quranic education for the development of the country.