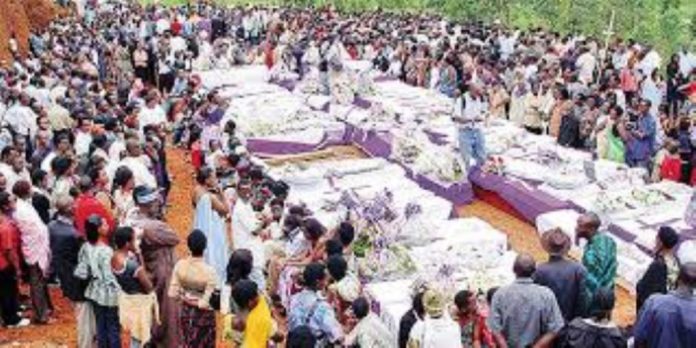 Leaders of various sociopolitical groups in the country, including Afenifere, Ohanaeze Ndigbo, Pan Niger Delta Forum, and Middle Belt Forum, are set to pay a solidarity visit to the people of Southern Kaduna on Saturday (today) and demand an end to incessant killings in the area.

This is as the Arewa Consultative Forum and a former Governor of Kaduna State, Senator Ahmed Makarfi, decried the worsening security situation in the area.

Southern Kaduna, a predominantly Christian-dominated area in Kaduna State, has witnessed the continuous killing of natives in recent times.

The security crisis in the area has generated outrage by several people and human rights groups across the country, with many calling on the state Governor, Mallam Nasir el-Rufai, to end the killings.

The Presidency had recently stated that the attacks in Southern Kaduna were reprisal ones, a comment that received a huge backlash from several people and groups in the country.

El-Rufai also recently imposed a curfew on the area to curb the killings. However, the people of the area bemoaned that the killings had not abated; rather, more people were being killed on a daily basis.

The latest incidents took place on Wednesday and Thursday wherein 21 persons were reportedly killed by bandits.

Confirming the killings, the Kaduna State Police Command said the bandits attacked Apyia’Shyim, A’Piako, Atak’Mawei, and Kibori, all in Atyap Chiefdom of Zangon Kataf Local Government Area of the state.

However, contrary to the police figure, the Southern Kaduna Peoples Union claimed that 33 persons were killed in the attacks.

The spokesperson for SOKAPU, Mr Luka Binniyat, in a statement titled, ‘33 killed in Zango Kataf in Kaduna on Thursday,’ said that prior to the attack, there was an intensive patrol and the security personnel enforced the 24-hour curfew, but sadly, “when the gunmen struck, they were not on the ground.” Binniyat added that 30 houses were burnt by the bandits in the attacks.

To empathise with the people of Southern Kaduna, leaders of the various socio-cultural groups in the country said they would visit the area today.

The spokesperson for PANDEF, Mr Ken Robinson, in an interview with one of our correspondents, said the forum and other groups such as Afenifere and Ohanaeze Ndigbo felt compelled to identify with the Southern Kaduna people in their trying times.

“We felt that we should empathise with the people of Southern Kaduna, where several people have been killed and properties destroyed by suspected Fulani herdsmen and bandits,” he said.

Robinson said the fact that the killings had not stopped implied that the President, Major General Muhammadu Buhari (retd), had not intervened in the crisis.

He also called for the overhaul of the security architecture to forestall the killings in Southern Kaduna.

“The government’s insincerity and the absence of ideas from the service chiefs are the reasons these killings have persisted. The capacity is there, and if the will is there to stop the senseless killings and destruction of property, they can stop the crisis in a minute,” he said.

Also, the National President of the Middle Belt Forum, Dr Bitrus Pogu, said the visit was “to see our people who have been displaced by militia herdsmen who enjoy killing, maiming, and burning people’s houses and forcing them out of their ancestral homes.”

Also, the Deputy National Publicity Secretary of Ohanaeze, Mr Chuks Ibegbu, who said he was visiting Southern Kaduna as the President of the Coalition of Civil Society Organisations of Nigeria, said the people of the area needed urgent rescue by those paid to protect them.

“As civil societies, we want to investigate the depth of the tragedy and (find the) way out,” he said.

The ACF National Publicity Secretary, Emmanuel Yawe, in a statement on Friday, said it was worrisome that the attacks took place during a 24-hour curfew.

It said, “The Arewa Consultative Forum is alarmed by the daily report of killings in Southern Kaduna. Kaduna and indeed the whole of Nigeria are getting tired of assurances and promises from security agencies.

“The agencies have to prove that they are equal to the task of stopping these senseless murders. For now, Nigerians may soon in desperation resort to self-help.”

Similarly, a former Governor of Kaduna State, Makarfi, said on Friday that he was disturbed and saddened over the fresh killings in Zangon Kataf Local Government Area of Southern Kaduna.

In a statement by his spokesperson, Mallam Mukhtar Sirajo, Makarfi, a two-term senator who represented the Northern Kaduna Senatorial District at the National Assembly and a former National  Chairman of the Peoples Democratic Party, called on the government to ensure that security agencies were adequately mobilised to secure the area to forestall further attacks.

In the meantime, a member of the House of Representatives from Zangon Kataf/Jaba Federal Constituency in Kaduna State, Mr Amos Magaji, has accused the Federal Government and the Kaduna State Government of failing to respond to the alarm raised by lawmakers from Southern Kaduna over imminent attacks on the communities.

Magaji, who spoke to journalists in Abuja on Friday, said if the federal and state governments had acted on the alarm, the attacks on Thursday that left about 30 people killed could have been averted.

The lawmaker decried that security agencies also failed to act on the intelligence made available to them, asking how a militia was able to invade the communities and attack the people for about six hours in the midst of a curfew without any arrest made.

Magaji had penultimate week raised the alarm over imminent coordinated attacks by militias and armed herdsmen on communities during the Eid-el-Kabir celebration.

“I am calling on the government of Nigeria to rise up. If not, we will get to a point where there will be anarchy in Nigeria and then, we will have a failed state. If there is insecurity in all parts of the country, then Nigeria is fast going down as a failed nation and until something is done, we are in trouble,” he said.