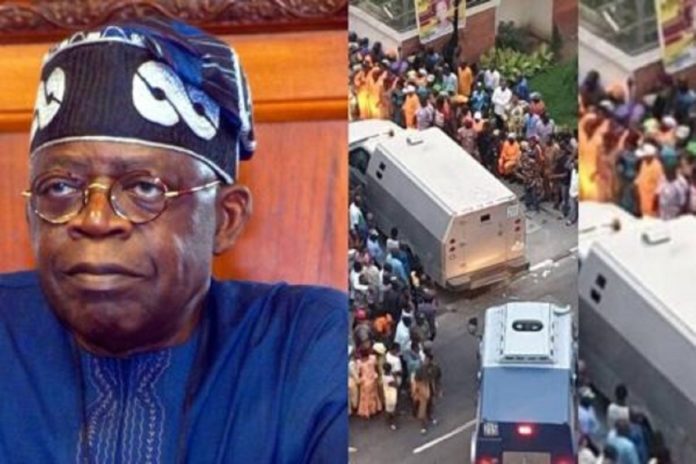 The petition, which was written by a pro-democracy group, Coalition Against Corruption and Impunity, was addressed to the new acting chairman of the EFCC.

The group also copied the Attorney-General of the Federation and Minister of Justice, Abubakar Malami, and the Inspector-General of Police, Mohammed Adamu, in the petition signed by its coordinator and secretary, John Olufemi and Mohammed Sanni.

The petitioners revealed properties which belonged to the Lagos State Government allegedly diverted by Tinubu, among other weighty allegations.

According to the group, Tinubu and Fashola own the Golf Course and Housing Estate located at Lakowe near Ibaju Lekki Government. It claimed that the estate was developed by Asset and Resource Management Limited at N75 billion on 1,000 hectares of land.

The petitioners claimed that Tinubu allegedly allocated Strabag Yard land, near Lagos State Secretariat at Alausa, to himself and developed a huge shopping mall on it.

The group alleged that the former Lagos State Governor’s Guest House located at No. 41 Oyinkan Abayomi, was transferred to Tinubu shortly after Fashola assumed office in 2007.

“Tinubu took over the prime land of 157 hectares with 2.5km of Atlantic beach front at N10 billion from the communities of Siriwon, Igbekodo, Apakin etc in Ibeju-Lekki Local Government and given to his crony, Ibukun Fakeye, to erect a gulf house and luxury villa with little or nor compensation to the villagers. Furthermore, he paid $20 million (N3 billion) out of public treasury to Ibukun Fakeye for commencement of the project in late 2006 coupled with release of additional funding for the project by Fashola and not owned by Lagos State government.”

It added, “Presently Tinubu owns the critical care unit in Lagos State University Teaching Hospital (LUTH) in Ikeja which was built and equipped with state funds. The outfit is managed by his cousin, Dr. Sikiru Tinubu as a orivate unit and the proceeds belonging to Tinubu. The outfits major revenue is derived from referral of patients by General Hospitals in Lagos State which is hardly affordable by ordinary Lagosians because of its exorbitant charges.

“He chased away Lagos State Polytechnic located at Ikoyi near old toll gate and allocated all the choice plots to himself, his cronies and political associates. Because of his greed, he deprived the youths of Lagos State Education to some extent and presently Television Continental (TVC) headquarters owned by him is located on the location.

The group alleged that the corrupt acts of Tinubu and Fashola had deprived Lagos tax payers billions.