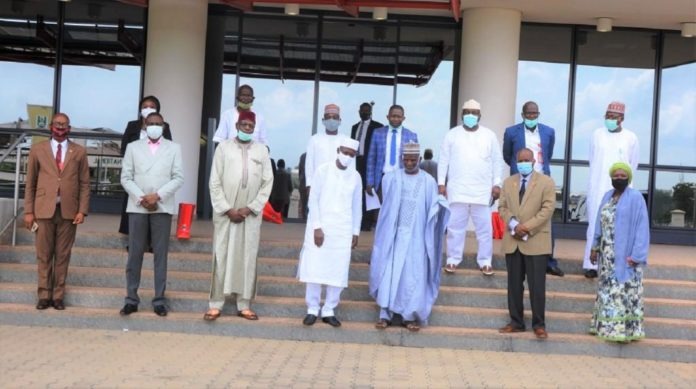 The Acting Chairman of the Economic and Financial Crimes Commission, EFCC, Ibrahim Mustapha Magu, was, on Wednesday, June 3, 2020, inducted into the President Muhammadu Buhari Integrity Hall of Fame in recognition of his record of integrity, transparency and honesty in his duties.

The induction was done by Arewa House (Centre for Documentation and Research), Ahmadu Bello University, at the Corporate Headquarters of the EFCC, Abuja.

Director of the Centre, Dr. Shuaibu Shehu Aliyu, while justifying the choice of Magu for the honour, said that the EFCC’s boss has demonstrated courage, consistence and integrity in the discharge of his duties.  He also stressed that, many corrupt Nigerians, that were considered untouchable in the past, had been brought to book.  “We are impressed by the courage and integrity of Magu and the record-breaking results that the EFCC has garnered since he assumed his role in 2015”, he said.

Continuing, Aliyu explained that, “Arewa House is all about honesty, integrity, transparency and reputation which the late Sardauna of Sokoto, Alhaji Ahmadu Bello exemplified.” He decried the havocs which corrupt practices have been causing the nation.

In his response, Magu appreciated the Arewa House for the honour bestowed on him, saying that he felt humbled to be linked with the Integrity Hall of fame of President Muhammadu Buhari. “It is quite humbling to be found worthy of an induction into the Integrity Hall of Fame of our great President.  President Muhamadu Buhari, no doubt, has established great reputation globally as an ardent and committed anti-corruption fighter.  His appointment as First-ever African Union Anti-Corruption Fighter bears great credence to his commitment to the fight against corruption. I, therefore, consider it great honour to be inducted into such integrity realm by the Arewa House”, he said.

While dedicating the award to officers and men of the Commission, Magu promised that the EFCC would not relent in the pursuit of its core values.  “Very recently, the EFCC made loud statements of its commitment to integrity by the action of its Sokoto Zonal Head, who declined a bribe offer of N100million.  He could do this because of the core values of the EFCC that emphasise professionalism, courage and integrity.  We will continue to ply this route and also sanction any officer that veers off the cherished values of the Commission.

He charged Nigerians to show more commitment to the anti-corruption fight, stressing that the fight is everybody’s fight.  “As I always emphasise, this task is a public task.  The public ownership of the fight against corruption will greatly build consciousness in every Nigerian that we can only make greater progress if we fight the menace together”

In his remarks, Secretary to the Commission, Ola Olukoyede called on civil societies and other institutions to emulate the Arewa House by joining and supporting the EFCC in the fight against corruption “so as to overpower the voices of those seeking to vitiate the efforts of the Commission.”