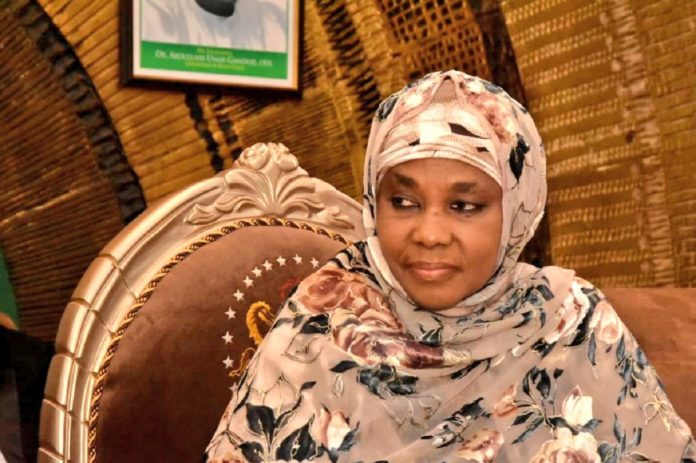 Orphans under the care of the state government express satisfaction with  Her Excellency, wife of the governor,  Dr Hafsat Abdullah Umar Ganduje for the extreme care rendered them particularly during the Holy month of Ramadan.

Orphans at the Internally Displaced Persons (IDP) Camp, Mariri Mariri Orphans and Nassarawa Children’s Home made their feelings known during  distribution of Sallah gesture by the governor’s wife, represented by the commissioner for Women Affairs and Social Development, Dr. Zahra’u Muhammad Umar.

Aliyu Muhammad, who spoke on behalf of other orphans at Mariri IDP Camp, says amid tears that “We feel at home here because we are being treated as as any other child who is before his parents. We really appreciate Her Excellency and the  Hon. Commissioner.

He also prays for successful tenure of His Excellency Dr Abdullahi Umar Ganduje, their teachers for their show of concern and the good people of Kano state for accommodating them.

Items distributed include one set of Kufta, kaftan (traditional attire with embroidery), Zannah (sewn caps to match) and a pair of shoe to each of them.

As for girls at Nassarawa Children’s  Home and Torrey Home, they were given one set of lace, veil and full sets of earings and pairs of shoe each.

Food Items and meats were given to each of the Remand Home for sallah celebration.

The commissioner hails  the public  especially women for complying with  government directive to stay at home special prayers and for being vigilant to their children with a view to prevent them from contracting of the Corona virus the pandemic.

In their separate remarks, the IDP Camp headmaster and headmistresses of Children’s and Torrey Home, express appreciation for the utmost concern by their Excellencies the governor and his wife towards human development.

Director Admin and General Services of the ministry,  Mariya Hodi and Director Social Development, accompanied the  commissioner during the distribution exercise.