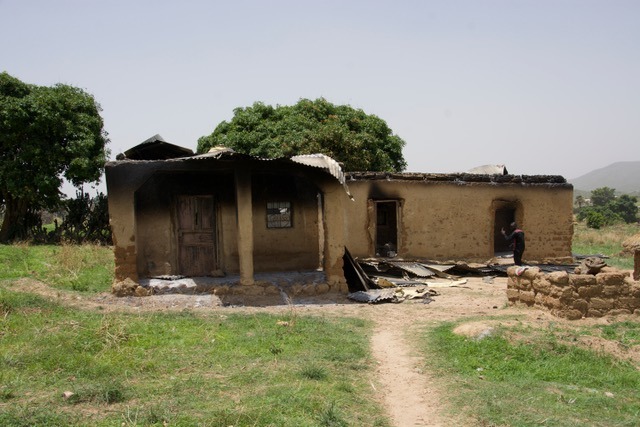 However, brave youths of the village put strong resistance to the invaders. One of the attackers was found dead and his phone retrieved and has revealed useful information which have been passed to the police.

The invaders who came by 6:45pm yesterday from behind the hills that serves as the boundary of Kaduna state and Ganawuri, plateau State, were numbered over a 100.

They attacked from four flanks causing confusing and pandemonium among unsuspecting villagers as village youths tried to fend them off.

After about 30 minutes of violence the following were unfortunately killed: Mrs Hanatu Joseph 58, mother of 5 Children; Mrs Sarah Sunday, 40 – She left behind her husband and 6 Children.

The others are: Mrs Dije Sajay, 55, married with 6 children and Mr Sunday David, 47 married with 7 children. He was a retrenched civil servant.

The attackers targeted food stores and bans of grains, making sure they burnt as much as they could. This is to ostensibly cause starvation, especially under this lockdown from the coronavirus.

Police and Soldiers came into Unguwan Magaji only this morning around 9am and saw the corpse of the dead herdsman, which the later took away.

Meanwhile, early this month, Ibrahim Atiga,42, a native of Unguwan Magaji, was killed by herdsmen on his way to the farm.

He has since been buried.

Also, in an unrelated development, kidnappers broke into the home of Mr. Jack Uwenke of Gbagy villa –  an expansive suburb of Kaduna – and kidnapped him ànd his wife on the 16th, April, 2020. Sabastine Stephen, a student of Kaura Namoda, Polythecnic was killed by the rampaging kidnappers.

The phone number of the dead Fulani herdsman in the Unguwan Magaji attack is: 090 3708 4640 – This is for the records of the public.

We are hereby calling on the police to take this rare lead and carry out a scrupulous forensic investigation and make their findings public. We  shall keep a keen eye on this and we call on the general public to also show interest.

So far, about 320 persons have been displaced from the attack and are in dire need of assistance.

It could be recalled that on the 13th November, 2015, armed herdsmen carried out coordinated and attacks on Unguwan Magaji and five other neighbouring villages in which 37 persons were killed, 202 homes razed and the only Church, a Catholic church was burnt down.

In conclusion, we  call on our communities to remain vigilante against forces of evil who don’t seem to care about the pendamic hanging over mankind in their quest for the blood of the innocent.

SOKAPU is aware of the pressure on government to enforcing the ongoing lockdown, but it must not waver on its cardinal responsibility of securing lives and property.

Impending Destruction Of PDP In Abia State: Time To Step Back From The Brink Before It Is Too Late

Re: “Biafra Will Be Achieved In Your Life Time- IPOB Fires Back At Bala Mohammed”

DSS says they did not call for tenure elongation for Buhari