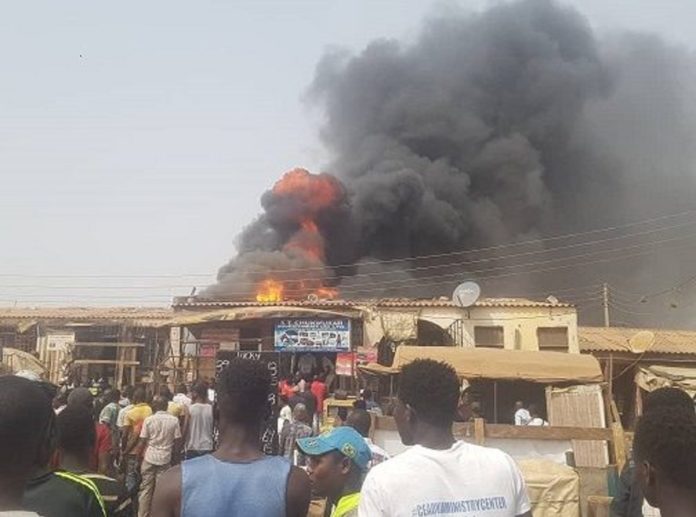 Many shops were razed on Friday morning when fire gutted Jabi motor park in Abuja.

The incident, which started at 10:12am, led to pandemonium in the park as passengers and motorists scampered to safety.

The situation got worst when the fire spread to a shop where car batteries and gas were sold, causing more havoc as combustible items exploded in the process.

The explosion sent out a large ball of fire and smoke into the air, causing serious commotion around the densely populated business area of the city.

The ensuing traffic girdlock bought business activities to a halt.

Sympathisers also rendered assistance as they evacuated goods from others shops to prevent them from being consume.

Though no live was lost in the incident, the traders had a hectic time to control miscreants bent on constituting a problem with their unsolicited assistance.
It took the timely intervention of the men of Federal Capital Territory (FCT), fire fighters who arrived the scene few minutes after, to put out the inferno and prevented it from spreading to other shops.

Findings revealed that the fire was caused by an electrical spark in one of the shops.

Those who lost their properties in the incident declined comment when our correspondent approached them.

Normalcy has since returned to the ever busy market.