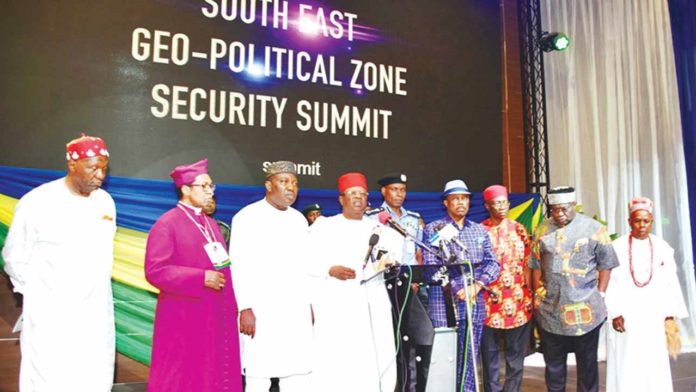 The Summit had in attendance

1. Taking into cognizance the existing security initiatives instituted by the Governors of the States of the South East at various local levels such as Vigilante Groups, Neighborhood Watches, Forest Guards, Farmers/Herders Committees, the Homeland Gate Keepers, etc which are in conformity with the Community Policing Strategy, the State Governors have accepted and adopted Community Policing as an effective tool in bringing Policing to the grassroots.

2. Community Policing Committees made up of Traditional Rulers, Community Leaders, Town Union Leaders, Religious Leaders, etc will be charged with the responsibility of selecting and recruiting Community Police Officers that will work within the Communities.

3. The Governors of States within the GeoPolitical Zone to reinforce and provide improved capacity for the Police and other Security Agencies in their respective states in support of the Community Policing Program.

4. Each State within the South East Geopolitical Zone to individually and periodically undertake operations against crimes and criminality, in synergy with the Police and other security agencies.

5. The States to individually develop modalities for sharing intelligence with other states in the Zone on the movement and activities of criminals within the Zone.

6. Each State within the Zone to increase its investment in social intervention programs aimed at providing legitimate and alternative means of livelihood for the teeming youths.

7. The State Governors within the geopolitical zone to have joint security meetings on quarterly basis to asses the security situation within the Zone.

8. The Ministry of Information in the various states within the Zone in conjunction with Traditional Rulers,  Community Leaders and Religious Leaders to liaise with the Police Public Relations Officers in the five state commands within the Zone to create public awareness and sensitization programs on the need for effective engagement and participation by citizens in Community Policing initiatives within their areas.

9. The Inspector General of Police to expedite action on the full take off of the two additional Police Mobile Squadrons recently established in the South East to complement existing security architecture within the Zone. In furtherance of this objective, the relevant State Governors will support the Nigeria Police, especially in the area of provision of land, office accommodation, vehicles and other essential logistics.