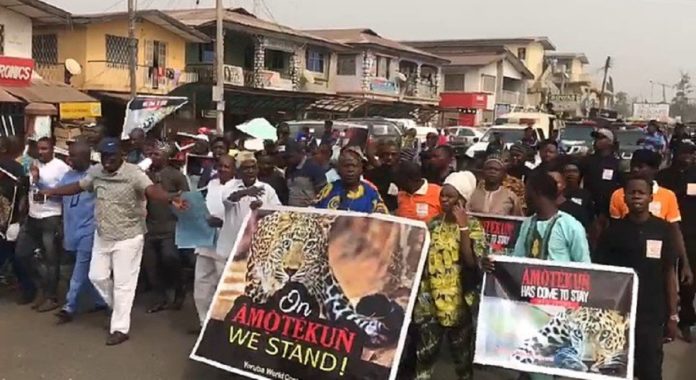 We Salute The Oduduwa Spirits in Us: Advices AGF Malami To Provide Enabling Legislation For “Operation Amotekun” Via Executive Bill For National Joint Regional Security Network.

In a press statement released on 23rd January, 2020 by the President of the Yoruba Council of Youths Worldwide (YCYW): the apex umbrella body for all Yoruba youths, Aare Barr Oladotun Hassan, Esq. He said – “I am not surprised to receive the retraction news of “Operation Amotekun” which has now been declared as ‘legal’ and further sought the Southwest Governors to work on the operational modus operandi and continuity through State Assemblies legislation according to the statement credited to Mr. Abubakar Malami SAN, Attorney General and Minister of Justice of the Federation on Thursday 23rd January, 2020.

It is indeed a clear display of the referred spirit of Oduwuwa in us, as well as the Omoluabi(virtuousness) principles, dignity and integrity that lies in our uncommon unity, culminating from the recent demands and collective show of supports from all Yorubas and non-Yorubas alike to the community policing strategic initiative: Western Nigeria Security Network code named: Operation Amotekun, A child of necessity whose time has come to stay.

In view of the legality of Operation Amotekun, we call on the AGF to lead the battle as a sign of proven his genuine interest in the security of lives and properties of all Nigerians on the urgent need to create proper legal framework for the Community policing strategy, through an emergency presentation by President Muhammadu Buhari of an Executive Bill to the 9th National Assembly on  the establishment of the National Joint Regional Security Network(NJRSN), since all regions has endorsed and showed common interest in the Amotekun pivotal  scheme, targeted at exclusively providing  complimentary supports to our conventional security institutions and architectures: Office  of the National Security Adviser, Nigeria Police Force, DSS, NSCDC and Armed Forces via effective joint operational intelligence and information sharing on the growing spate of hydra headed insecurity challenges and other dreadedful criminality with grave records of unmitigated  wanton destructions of lives and properties, robbery, kidnappings, rape, ritual activities to mention a few by criminally minded individuals particularly the Boko Haram, Fulani Herdsmen Armed Bandits, Ritualists, simultaneously terrorizing almost every sections of the country daily.

Based on this premise, we call for a robust dialogue with all critical stakeholders for the overall success of the scheme in all Local Governments, States, Regional and National regimental base of the NJRSN, designed to recruit well informed and fortified staffs and combatant men from our existing traditional security social-security outfits like OPC, YWC, YCYW, Agbekoya, Hunters  (Olode) and Vigilante Groups respectively from the Southwest while the current Civilian JTF, Hisbah and the rest from the Northern Zone, as well as Southeastern and South South zones will be regulated under the National Joint Regional Security Network law.

This shall provide for all the necessary information, administration and operational efficiency through a special security interagency outfits under the coordination of the Office of the Inspector General of Police down to the divisional headquarters nationwide, while working to improve on the existing Police Community Relations Committee to accommodate Operation Amotekun alongside other native names in other regions and states/Local Government respectively.

We hope to Salute the indefatigable spirits of all the Southwestern Governors and our Royal Fathers and leading Yoruba Stakeholders, Political Leaders and socio-cultural organizations for the resilient show of unimpeachable strengths and uncompromising commitments to the yearnings of the people, while it is high time to swing into full action on eagle eye recruitment selection process, and other necessary modus operandi be fine tuned accordingly.