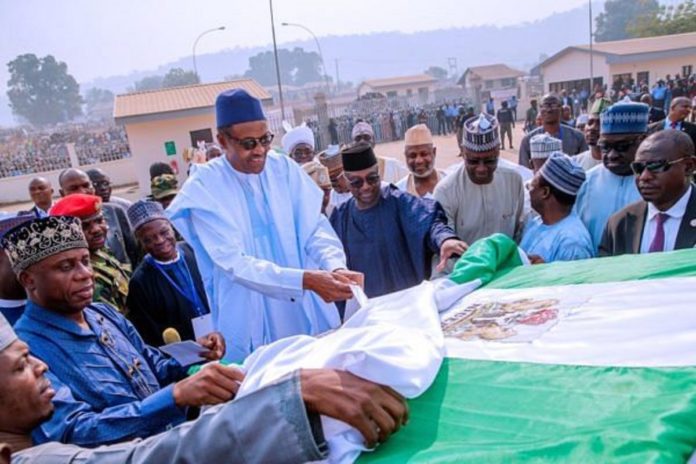 Buhari said the inauguration of the ecological projects further showed the commitment of his administration to addressing  flooding and erosion challenges in the country.

News Agency of Nigeria (NAN) reports that Idye Community was among the worst hit areas of the 2017 flood that displaced over 120,000 persons in the Benue capital, Makurdi.

NAN further reports that the drainage which was phase one of the project covered Nyiman layout, Idye and Achussah communities.

The President, who was represented by Sen. George Akume, Minister of Special Duties and Inter-Governmental Affairs, said the 3.35-kilo metre Idye Basin drainage project was one of the 17 ecological intervention projects in the control measures in the country.

“This project is one of the 17 ecological intervention projects approved by Mr President for the fourth quarter of 2017 and was awarded for execution by the Federal Executive Council on May 4, 2018 with a completion period of 48 weeks.

“The importance of this project to the community cannot be over-emphasised as it is expected to address the devastating effects of erosion and flood in the community.

“The completion of this project underscored  Federal Government’s concerted efforts and sincerity of purpose in tackling problems of its citizens and making life more meaningful for the people of our great nation.

“There is no doubt in my mind that the project will encourage and improve the health status, economic activities and the general well-being of the of this community,” he said.

The president further commended the people of the community for allowing a peaceful and conducive environment that led to the successful completion of the project.

He appealed to the community to also prevent the misuse of the project such as filling the drainage channels with debris and refuse that could lead to another flooding or erosion.

Lawal, who was represented by Mr Mathias Garba, a Deputy Director, Soil Erosion and Flood Control Department, said the project was completed within record time.