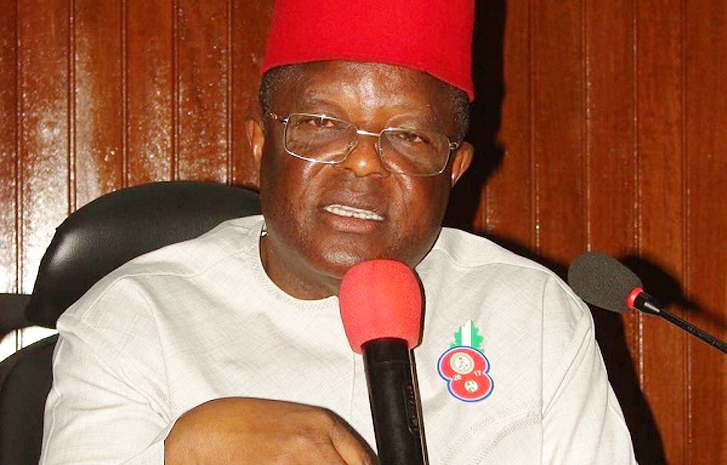 We the global family of the Indigenous People of Biafra (IPOB) wish to warn Ebonyi State Government and all those unfortunate and foolish enough to be recruited into their Janjaweed Bakassi boys to fight IPOB, that henceforth they will be treated as agents of RUGA and enemy of the people of Biafra. We view them as one and the same with those enemies of Biafra hell-bent on bringing Fulani RUGA settlements to our land.

The report by TBRV is correct therefore the media frenzy by Ebonyi State Government to deflect attention away from their formation of this local treacherous Bakassi outfit is nothing but a face saving exercise.

IPOB Intelligence units on the ground continue to report the treacherous activities of this very outfit formed to provide grassroot logistical support and local intel to hoardes of invading Fulani terror herdsmen in Ebonyi State raping our mothers and destroying our villages. Those that doubt our opposition to RUGA should ask Willie Obiano of Anambra State what became of his Miyetti Allah friends he gave land in Anam to. We IPOB chased them away from Anam and all over Anambra State and our ongoing operations in Ebonyi is designed to do exactly the same.

Inviting Nigerian Army, Bakassi Boys and a miriad of local Fulani informants on the ground in parts of Ebonyi will not deter instead it will embolden IPOB resistance to this blatant Fulanisation of the land of Biafra. When we said no inch of Biafraland will be conceded to the terrorist Miyetti Allah group (Fulani herdsmen) we meant every word of it. Any person foolish enough to join Ebonyi State Government’s effort to bring RUGA to the sacred land of Biafra through this illegal Bakassi Boys will pay dearly for it.

We are not asking Eastern governors to stop their age long servitude to the caliphate and betrayal of their people, which is the only they can remain politically relevant, but what we are saying to them is there won’t be any RUGA in Biafraland. They should ask those Alimajiri terrorists they sent on previous occasions to invade Ebonyi what became of them.

We want to let the world know this secret formation of Bakasi Boys in Ebonyi State was solely designed to confront and attack any individual suspected to be supporter or family member of IPOB because of our refusal to allow Fulani Ruga settlement in Biafraland particularly in Ebonyi State. Gov. Dave Umahi and his Fulani masters in Aso Rock have perfected their arrangement to eliminate more of our people because of our total rejection of the establishment of this land grabbing Fulani Life Stock Initiatives Program in the state.

Numerous and meaningless press statements including the denial of being involved in the formation of this secret group against IPOB has no meaning because it is in the public domain and the facts are verifiable. The protection of our Biafran citizens in Ebonyi State and Biafraland in general in the face of this relentless Fulani onslaught is our  priority, therefore IPOB cannot be wished away by the caliphate supporting Ebonyi State government. Nothing will save Dave Umahi and his co-conspirators, the South East governors and Ohaneze Ndigbo leadership led by Nnia Nwodo at the apoointed time if they continue to form and encourage these criminal gangs to exist and attack anybody or secretly sabotage IPOB efforts to liberate Biafrans from this mess called Nigeria.

It is imperative we openly let the general public be aware that Dave Umahi commissioned this group called (Bakassi Boys) in Ebonyi state to kill and attack anybody who openly deemed it necessary to support IPOB family members in the strong efforts to stop Dave Umahi and Fulani community from establishing Ruga settlement in the state.

The series of arrangements and decisions by Dave Umahi and co, especially the South East governors and Ohaneze Ndigbo, cannot stop or change our resolve towards Ruga settlement on any Biafran territory. We are on the lookout for this group with their usual military escort and when we do, we shall treat them as the Fulani terror herdsmen supporting scoundrels they are. There will be no pity or mercy.  Ebonyi State is a solid IPOB territory and anybody seeking to convince himself otherwise must be under the influence of hard drugs.

It is on record that IPOB is not fighting for anything else other than the preservation of the territorial integrity of Biafraland and we shall continue to do until Biafra is fully restored and beyond.

We are waiting to hear from this newly created Bakassi nonsense in Ebonyi State to make any move against IPOB, only then will they know that IPOB is the people and the people is IPOB. Anybody foolish enough to sign up to Fulani sponsored security outfit in Biafraland like Bakassi Boys have effectively signed their death warrant. No amount of charms, reasaurance from a native doctor or amulets will save any of them. We are waiting for them.