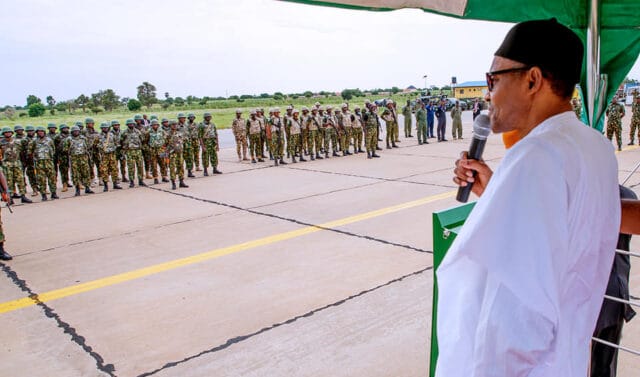 The Nigerian Air Force (NAF) says its Air Component of Operation HADARIN DAJI (OPHD), has neutralised no fewer than 10 bandits at forests near Birnin Gwari and Janko Hill in Kaduna.

NAF Director of Public Relations and Information, Air Commodore Ibikunle Daramola, who disclosed this in a statement on Sunday in Abuja, said the operation was conducted on Saturday.

” The operation was conducted yesterday, Oct. 5, following the directives by the OPHD Headquarters to resume kinetic operations against camps identified as harboring unrepentant armed bandits.

” The decision was taken in the wake of the attack on troops’ location at Sunke in Anka Local Government Area of Zamfara State as well as the increased migration of bandits towards the Birnin Gwari area of Kaduna State,” he said.

Daramola explained that the attack on the bandits was undertaken when a NAF helicopter on armed reconnaissance mission over the Birnin Gwari general area spotted several bandits at the location and engaged them with its guns killing some of them.

He said some bandits were similarly tracked to Janko Hill and equally neutralised.

Daramola said the objective of the renewed kinetic operations is to ramp up the pressure on the bandits with a view to ensuring the ongoing peace process is not scuttled.

” Accordingly, the Air Component OPHD will continue to dominate the general area through armed reconnaissance missions to facilitate a return to normalcy in the North West of the Country.

” All persons involved in banditry in the area are therefore strongly advised to renounce violence, surrender to security agencies and hand over their weapons,” he said.