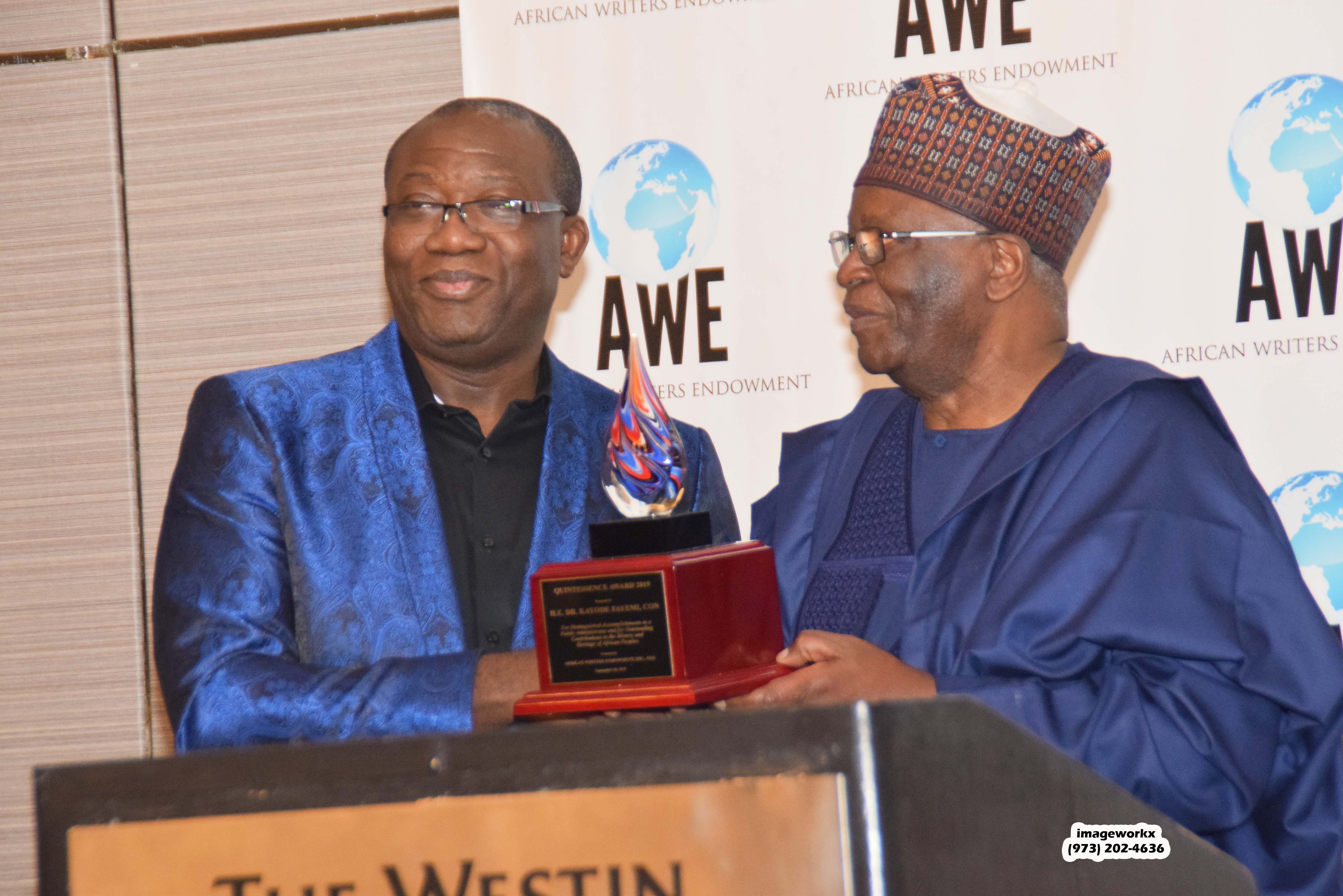 When three performance artists began the rhythmic and coordinated beating of the talking drums in the acclaimed Yoruba musical tradition, the over 260 people who had gathered at the Westin Princeton hotel in New Jersey, knew that the Special Guest of Honor, His Excellency Governor Kayode Fayemi of Ekiti State, had arrived. The event was the 2019 Quintessence Awards and Conference of the African Writers Endowment, In. (AWE).  Governor Fayemi was the honoree at the event on Saturday, September 28, 2019, where he received the 2019 Quintessence Award, along with Honorable Jaqueline Jennings, a former mayor of Willingboro Township, New Jersey.

Presented to Fayemi formally by His Excellency Professor Ibrahim Gambari, the award was for Governor Fayemi’s “Distinguished accomplishments as a Public Administrator, and for outstanding contributions to the history and heritage of African peoples.” Gambari, who was the first recipient of the award in 1998/1999 and who chaired the event this year, said he was glad to see Fayemi receive the recognition. “The governor is a scholar, an academic, an excellent public administrator, and one who exemplifies enlightened leadership on our continent,” Gambari stated. Gambari commended the AWE for sustaining the event for 20 years. “It is one thing to start something; it is even more remarkable to sustain it. The Pan-African thrust of this event remains apt,” he stated.

Both the New Jersey governor, the Honorable Phil Murphy, and the bicameral New Jersey Legislature, also weighed in on the recognition of Governor Fayemi. Murphy wrote a letter acknowledging the event and congratulating Fayemi for the award he was about to receive. Led by State Senator Troy Singleton, Assemblyman Herb Conaway, and Assemblywoman Carol Murphy, the New Jersey Senate and the New Jersey General Assembly also issued a

Joint Resolution in honor of Fayemi, extoling the governor’s cerebral background and practical approach to governance, as well as his strong character as a public servant.

To the pleasant surprise of the organizers and attendants at the conference, Governor Fayemi was accompanied to the event by two of his colleagues from Nigeria – Governor AbdulRahman AbdulRazaq of Kwara State, and Governor Simon Bako Lalong of Plateau State. The two governors had come to support Fayemi, who is the Chairman of the Nigerian Governors’ Forum.

In the keynote speech delivered at the event, Fayemi thanked the African Writers Endowment for the recognition accorded him. He said he was proud to be in the company of those, such as Professor Gambari, who had received the award in the past. “My presence here should be an affirmation that I am truly honored to receive this award. I am proud to join the impressive list of others who have received this honor. I personally consider the literary community to be my first constituency. As a writer myself and journalist, every writer is kindred spirit. I am also married to one,” he said, referring to his wife, Erelu Bisi Adeleye-Fayemi, who is an author and a celebrated activist in her own rights.

“I must take a moment to salute all writers present here, as well as the leadership of the African Writers Endowment, Inc.,” Fayemi continued. “This is one award that is close to my heart; it is deeply appreciated and I humbly accept it. I also want to extend gratitude to the Senate and General Assembly of New Jersey for the honor done me by the resolution in the hallow chambers of the Senate and the Assembly.”

According to the Executive Director of the African Writers Endowment, Dr. Ugorji Okechukwu Ugorji, the event was successful beyond the expectations of the organizers. ‘It was humbling and gratifying to see our honorees attend and personally accept. And it was a triple pleasure and honor to see three governors from Africa’s largest democracy attend our gathering, break bread with all the attendants and join all of us on the dance floor.” Ugorji went on to say that “Governor Fayemi was superlatively impressive in his keynote speech, the delivery of the speech, and in his carriage.”