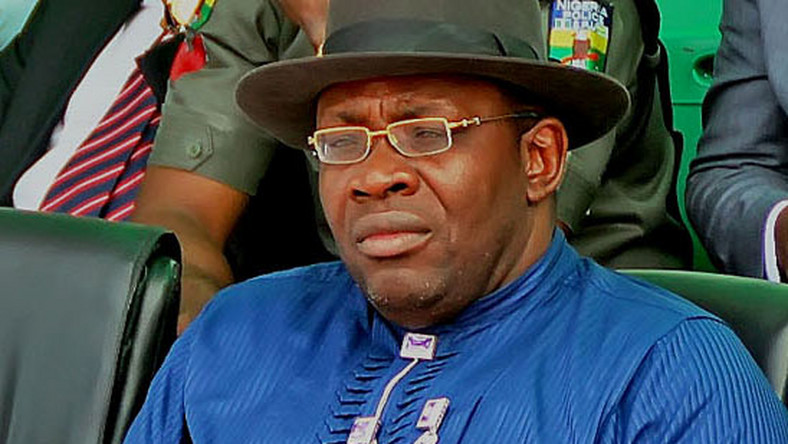 The Deputy National Publicity Secretary of the All Progressives Congress (APC), Mr. Yekini Nabena has called on the Economics and Financial Crimes Commission (EFCC) to investigate shocking details exposing the plan of the Governor of Bayelsa state, Seriake Dickson to sell off an oil field, Atala Marginal Field (OML 46) belonging to the state, months to the Governor’s handover.

This is coming after revelations that Governor Dickson illegally withdrew and diverted N17.5 billion from bank accounts belonging to the state government to prosecute the November 16 Bayelsa governorship election in the state.

In a statement made available to newsmen in Abuja on Tuesday, the APC deputy spokesman, alleged that the peoples Democratic Party-led government in Bayelsa was planning to sell the oil field to fund the forthcoming governorship election.

“Our law enforcement and anti graft agencies cannot fold its arms while the state is being robbed to enrich the pockets of a few people and fund the election of the Peoples Democratic Party (PDP) in the state.

“The EFCC and NFIU must take immediate action before the outgoing Governor Dickson and his cronies bankrupt the state and sell our resources to themselves.

“Atala-OML 46, which was awarded to Bayelsa state by the Department of Petroleum Resources (DPR), a subsidiary of the Nigeria National Petroleum Corporation (NNPC) in 2003 is managed by the Bayelsa Oil Company Limited (BOCL). Hardy Oil Nigeria Limited (HONL) and Century Exploration and Production Limited (CEPL) are technical and financial services providers.

Details of the planned sale of oil field, according to the APC chieftain are contained in a September 5, 2019 leaked letter by Bayelsa Oil Company Limited (BOCL), Secretary/Legal Adviser, Barr. Oruah C. Mark to BOCL’s Board Chairman, titled: “RE: SALE OF 41% OUT OF BOCL’S 51% PARTICIPATING INTEREST IN ATALA MARGINAL FIELD (OML 46) TOGETHER WITH ITS OPERATORSHIP TO HALKIN GLOBAL INVESTMENT LIMITED.”

The scanned copy of the letter which I have made available has revealed that the Bayelsa state Governor, Henry Seriake Dickson has perfected plans to sell the state owned oil company.

Nabena alleged that governor Dickson has collaborated with the Managing Director of the BOCL, Mr Ebikabowei C. Dorgu, to assign 41% out of BOCL’s 51% Participating Interest in Atala Marginal Field together with its operatorship to Halkin Global Investment Limited (HGIL).

“On 5 Sept 2019, BOCL’s MD, Mr Dorgu instructed that certain named Board Members meet with him in the office of the Deputy Chief of Staff, Bayelsa State Government House for an important official assignment.”

The letter reads: “Thereafter, I (Secretary/Legal Adviser) met him (MD) and he gave me two copies of BOCL’s Board resolution for execution. The resolution was a document authorizing BOCL Management to negotiate, execute necessary documents to assign 41% out of BOCL’s 51% Participating Interest in Atala Marginal Field together with its Operatorship to HGIL; inter alia. Unsigned copy of the resolution is hereby attached for your ease of reference.

“According to MD, the document was prepared by HGIL and in a brief moment I asked him of the NIO, (Ten Billion Naira) loan facility from Sterling Bank which he is currently processing and whether CEPL and HONL settlement and payoff has been concluded.

“However, he explained that those issues are on-going but that this transaction was directed by the Governor, and I was surprised that all these activities with a third party investor is happening without my knowledge.

“In the evening of the same day, the MD called me to meet and execute some documents for him at Brass Suit hotel,”

Mr Mark said that the MD of the BOCL, Mr Dorgu, requested for his signature to a copy of Farm-ln Agreement and Service Agreement between BOCL and HGIL.

“Highlights of the Farm-ln Agreement following my brief perusal of the document include:

“In view of the provisions outlined above and the Service Agreement before me for immediate execution; I requested him to oblige me study the agreements with a view of forming a legal opinion in the hext twelve hours. He refused, stating that he was directed to get me sign the document without questions.

“I further requested for him to let me secure the authorization of BOCL Board Chairman but he refused, stating that he has secured the approvals of the Chairman and the Attorney-General of Bayelsa State. Finally, I told him that I cannot sign the documents in the instance. However, the MD became very angry and threatened to sack me if I do not resign by the next day in the morning.

“Notwithstanding the foregoing, it is my considered opinion that BOCL cannot lawfully assign its interest in Atala Marginal Field (OML 46) without CEPL’s consent or involvement not just for CEPL’s right of first refusal in light of the obvious truth and since CEPL is entitled to 80% revenue from BOCL’s 51% as repayment for BOCL’s carried cost (interest) from 2011 till date. Consequently, until all the legal issues surrounding Atala Marginal Field pursuant to BOCL letters to CEPL and HONL are lawfully and amicably resolved, any investor buying interest in Atala Marginal Field (OML 46) is likely to buy a lawsuit.

“It is also my opinion that whosoever is directing the approval of this transaction must be the end-point or overall beneficiary of the transaction; while BOCL, its staff and Bayelsa State as a whole will lose terribly. I therefore, distance myself from this ungodly act in its entirety.

“Sequel to the foregoing, it is highly recommended that the activities of the MD concerning his secret dealings (one-man-show) regarding the management of BOCL, Atala Marginal Field (OML 46), OPL 240, BOCL’s lawful Partners and potential investors be called to order or checked immediately in order to forestall the apparent intention of destroying BOCL beyond lawful and useful repair.” 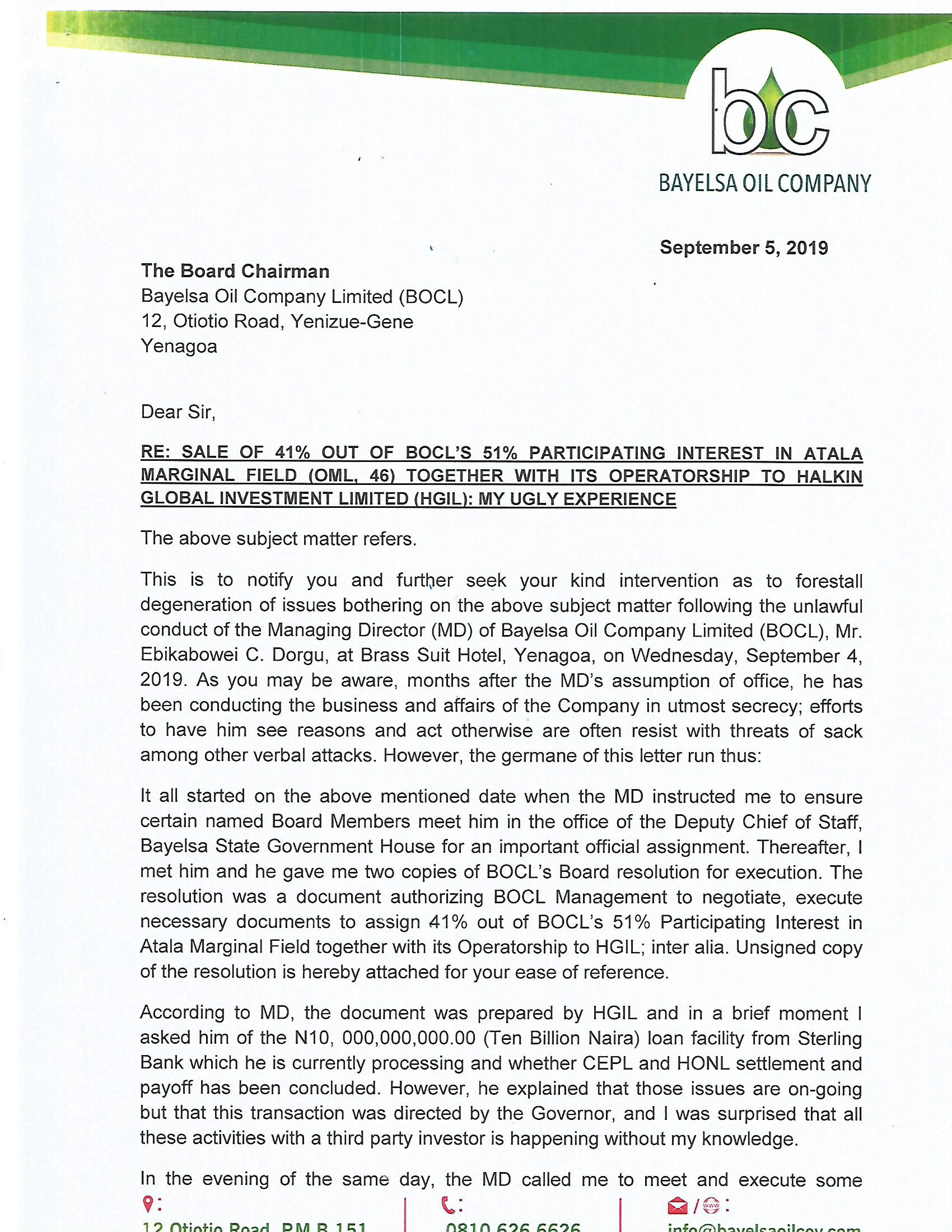 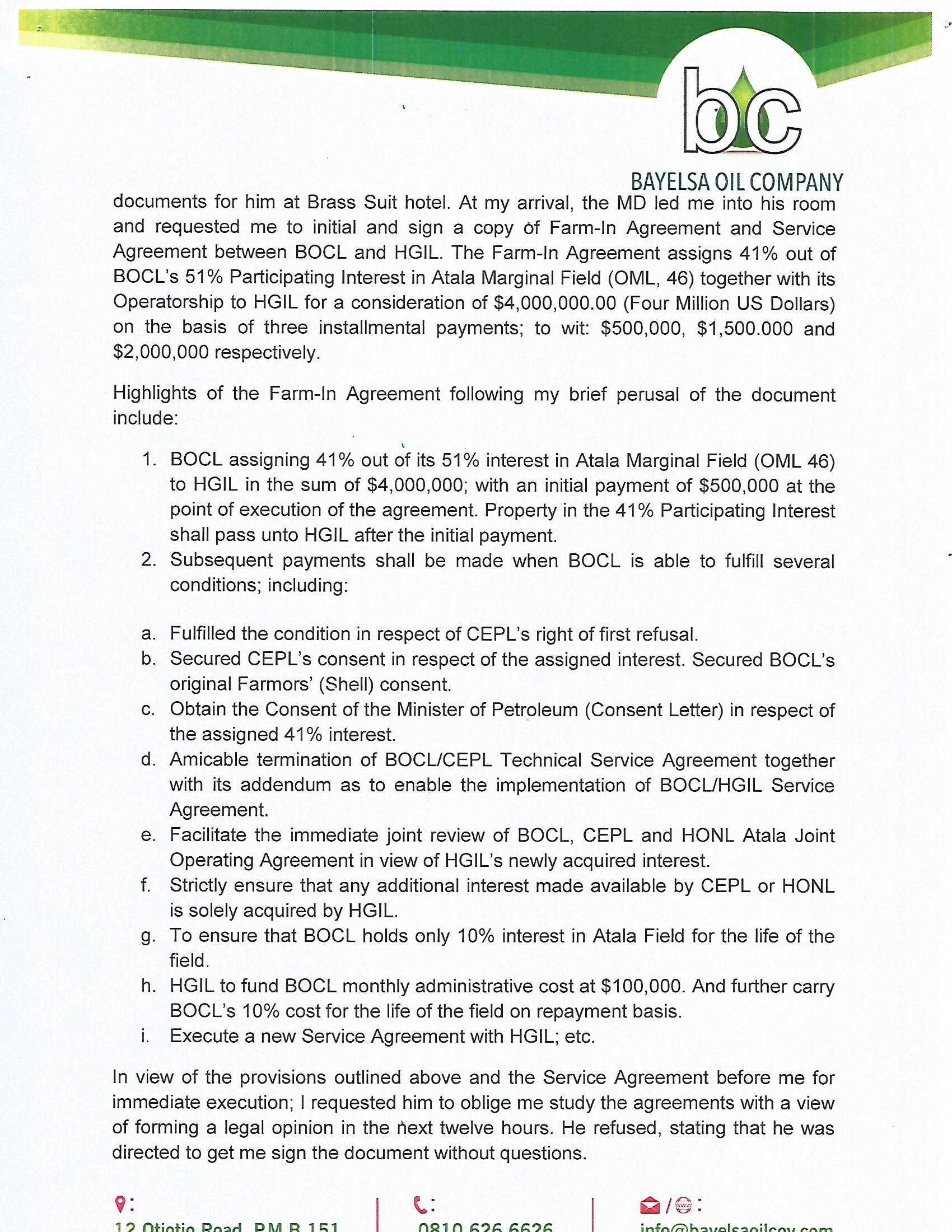 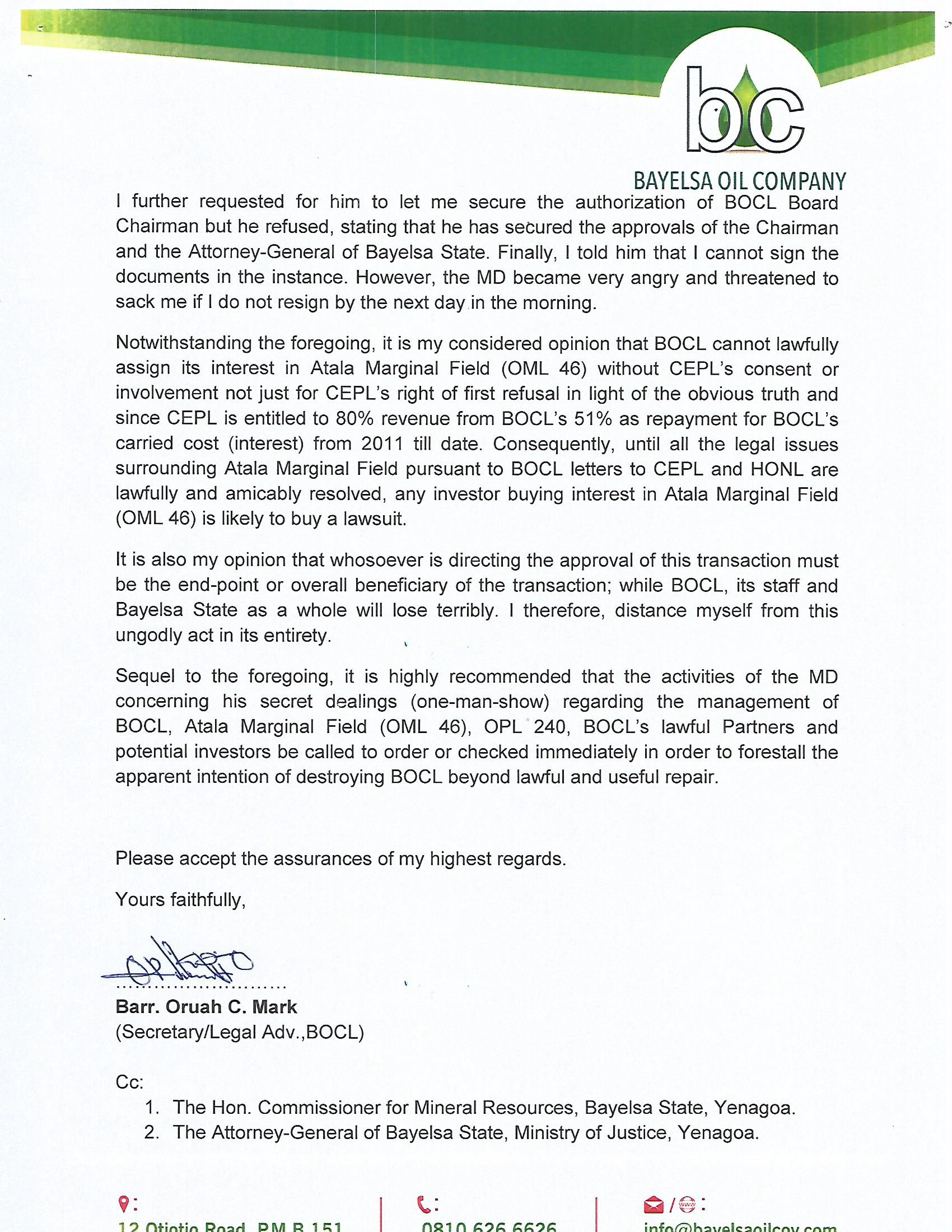