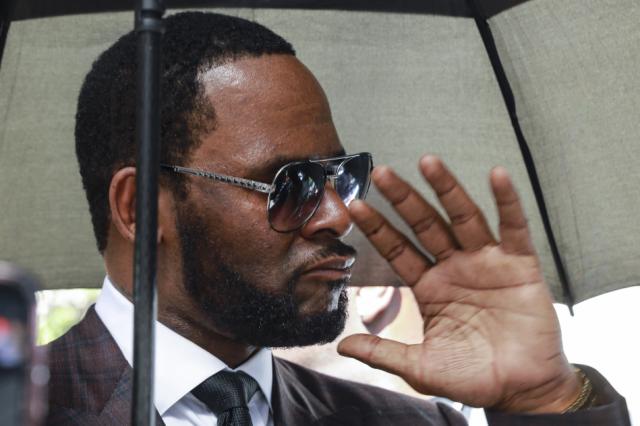 The difference between R. Kelly’s life in 2002 when he was last charged with child sex-related crimes and his arrest last week on even more serious charges was on full display when the R&B singer turned and slowly walked out of court.

Each step Tuesday was cut shorter than normal by the shackles around his ankles — a reminder of how small his world has become and how the advantages he once possessed have vanished. He was not posting bond and leaving by the front door to return to his life as an international recording artist as he did 17 years ago. He was heading back to a federal jail cell knowing there’s a good chance he will stay there for months or even years before his case comes to trial, after a judge said the charges against him are too serious to release him on bond.

In the space of an hour, a federal prosecutor and Kelly’s own lawyer outlined many of the ways the 52-year-old singer’s life has changed. When he eventually went to trial in on child pornography charges in 2008, his lawyers convinced a jury that Kelly was not guilty and prosecutors couldn’t prove that it was Kelly or a certain 14-year-old girl in a grainy sex video.

“You are almost better off asking what’s not different for him, the situation is like night and day,” said Renato Mariotti, a former federal prosecutor in Chicago. “R. Kelly is now facing an array of challenges that he wasn’t facing years ago and the resources the federal government can bring to bear far exceed anything he faced in state court.”

For starters, the federal prosecutors in New York and Chicago and the FBI agents who have been working on the case are among the most experienced law enforcement officials in the world.

“He’s facing a team of agents used to putting together complex, challenging cases against well-funded defendants,” he said. “They did the El Chapo case,” he said, referring to the federal probe that led to the conviction in New York of Joaquin “El Chapo” Guzman, one of the wealthiest and most powerful drug lords in the world.

And unlike often financially strapped state prosecutors, the U.S. Attorney’s office and the FBI won’t be outspent, he said.

The federal indictments in New York and Chicago accuse Kelly of kidnapping and coercing women and girls into having sex, producing and receiving child pornography, inducing minors to engage in sexual activity, and taking part in a conspiracy worth hundreds of thousands of dollars to cover up sex crimes going back decades. Kelly, who has been in jail since Friday, was arrested on state sexual abuse and sexual assault charges involving three minors and one woman over roughly a 10-year period. As with his not guilty plea to the federal charges on Tuesday, he has pleaded not guilty to those charges as well.

Perhaps the biggest difference between the case in 2008 and now is the girl at the center of the charges. She didn’t testify then, perhaps as Assistant U.S. Attorney Angel Krull suggested to U.S. District Judge Harry Leinenweber, because Kelly paid her off. But in this case, she has already told her story.

“The victim has testified it was Kelly who did this,” Krull said. The young woman told a federal grand jury that she and Kelly appear in the three videos prosecutors say they have, in which he repeatedly made her call him “Daddy.” Prosecutors have five witnesses who will back up her account, Krull said. “There is no doubt it is him.”

It’s not just that the federal cases are potentially stronger this time. It’s that Kelly is weaker.

The two men who prosecutors say helped Kelly fix the first case have been charged with paying hundreds of thousands of dollars to recover child sex tapes to keep them away from prosecutors before Kelly’s 2008 trial. They’re no longer in a position to help him and could actually hurt his case.

Mariotti said he suspects that when prosecutors charged the two they did so thinking they might cooperate in exchange for reduced or dismissed charges. “I certainly think that was in the back of their minds when they charged them,” he said.

And while in 2002, Kelly walked out of court and into his recording studio to make a string of albums before his trial six years later, on Tuesday he did not return to the luxurious Trump Tower where he’s been living, but to jail.

Kelly’s attorney, Steve Greenberg, said his client is being held in isolation where he doesn’t even have access to television, and about the only technology he is afforded is a telephone for no more than a few minutes a week. That means Kelly, who has already been dropped by his record company and seen concert after concert canceled, has no way to make a living as long as he’s locked up.

All those millions and millions he made during his long career? Between child support payments, hundreds of thousands of dollars spent in a costly divorce settlement and, according to prosecutors, money he paid to find and keep young girls and prevent what he is doing with them from becoming public, Kelly is pretty much broke.

“He has no money,” Greenberg told the judge on Tuesday.

In fact, he is so short of funds that after he was arrested in February he sat in jail until a fan put up the $100,000 to bail him out.