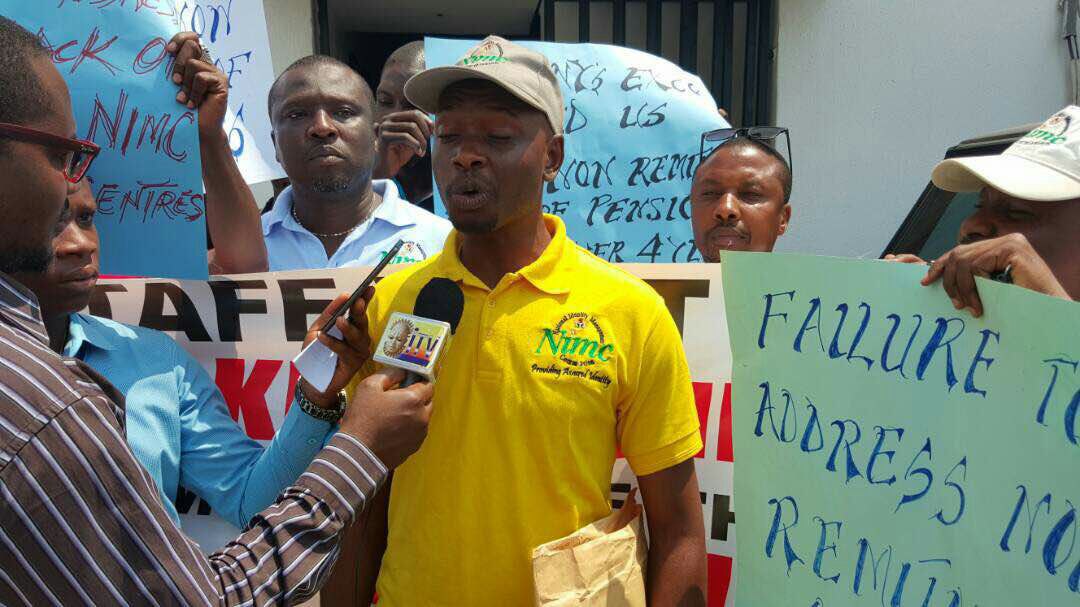 There is no doubt that Nigerians are all suffering from “Biometrics fatigue” owing to the duplicated functions of the NIMC by some of her partners like the Independent National Electoral Commission (INEC), Federal Road Safety Commission (FRSC), Nigerian Immigration Service (NIS), Central Bank of Nigeria (CBN) via BVN, Nigeria Communications Commission (NCC) via SIM Registration, National Pensions Commission (PENCom), Joint Admission and Matriculation Board (JAMB),  National Health Insurance Scheme (NHIS), West Africa Examination Council (WAEC)/National Examination Council (NECO), to mention but a few; are all engaged in capturing demographics and Biometrics resulting to a colossal economic waste of time and materials running into billions of Naira because in each of these bodies/agencies, considerable amount of time ranging from hours to days are required  to complete  these processes which could have been channelled to other activities beneficial to the country.
The Federal government is yearly duplicating identity functions through the above mentioned Agencies leading to avoidable wastage of tax payer’s money in the process. Harmonization through the Mandatory use of NIN could have saved the government billions of Naira but most political actors of government engage in duplication for dubious and selfish reasons like racketeering and also to forestall national breakthrough that would checkmate anomalies in the system.
All that was required to save cost or prevent the above madness was the use of the National Identification Number (NIN) issued by NIMC just like the Social Security Number used in America, United Kingdom’s NINO etc. For instance, one going to INEC, NIS or FRSC to obtain either of their voters card, International passport, Driving License respectively are not supposed to go through same biometric rituals again. You are not supposed to be asked your name or any other long questions again except, “please give us your NIN”? Which can be electronically  securedly  used to get your basic data/details needed for the service(s) so desired. Thereafter, if there is a need, they will only update such information in conformity to what they want at that material time. The NIN also have the potential of helping FG fight corruption and insecurity in the country by routing our identity theft, ghost workers syndrome and easier and real time identification of who you are really dealing with in all its ramifications.
The Federal government in September 2018 endorsed the Strategic Roadmap for Nigerian Digital Identity Ecosystem Project to enhance accelerated population of the National Identity Database (NIDB) managed by the NIMC. In January 1, 2019, the Federal government began the mandatory enforcement of the use of NIN for some essential services like issuance of passport, registration of voters card, opening of bank account, and transactions with social security implications etc. All these as we speak today, is still in theory owing to lack of political will power of tbe NIMC  under its current DG/CEO, Engr. Aliyu A. Aziz, for active enforcement and compliance and also galvanize  other financial potentials of the National Identity Management System (NIMS) project;  which will  make NIMC one of the most important agencies in the country owing to its other allied services such as NIN verification and authentication, lost/expired National e-ID card replacement/renewal etc. The DG/CEO has been running a very poor welfare regime since he came on board in 2015 to the detriment of the project.

A look at NIMC offices/Enrolment and Registration Centers (ERC’s) nationwide has untold stories of Federal government’s  neglect and indifference  for this important organisation owing to lack of funding for this all important Commission in this Digital age. Employees have been turned into day time beggars as most NIMC staff have to beg for data, fuel, mouse, toners, printers, seats, A4 papers, generators, ceiling fans or standing fans etc in order to enrol Nigerians and  residents into the NIDB as if the project is not pivotal for sustainable economic growth.
The incompetence of the NIMC management team is first rate. NIMC management  who finds it difficult  to provide staff with staff ID cards will certainly not measure up in the production of National e-ID card for Nigerians. Those who registered since 2013-2018 are yet to have their cards and some have been in the waiting list for over 5 years now. The NIMC Management Team who are supposed to sell the NIMS project to President Muhamadu Buhari seems  busy repeating previous budget for presentation yearly, despite increased nominal roll and backlogs of unprinted cards.
This unprofessional handling of budgets by the commission and the dubious and selfish application of the poor budget is at the detriment of the Project and their staff who are the worst paid identity Managers in the World. The confidentiality and security of Nigerians data right from the President to the common man is on a timed bomb and Nigeria must rise above this threat by funding NIMC commensurately. A hungry man can be compromised by the slightest temptation. The DG/CEO must not be allowed by the Federal government to continue with his anti-staff welfare policies prevalent in the commission.
One could think President Buhari is not interested in the NIMC project with the dwindling yearly allocation to the commission ever since he took over in 2015. The increasing security threats in some parts of the country which the President is desirous of curtailing, put the mandatory enforcement of the NIN as a step in the right direction. Recalled during President Buhari’s keynote address in April at the 2019 Annual Investment Meeting (AIM) meeting in Dubai (UAE),  he highlighted the importance of digital identity globalization and noted that, Nigeria had keyed in through NIDB managed by the NIMC. But Federal government seeming neglect of the commission, and silence in the DG/CEO’s high handedness in handling  NIMC staff welfare is a serious concern. This aberrations prompted the Association of Senior Civil Servants of Nigeria (ASCSN) NIMC Unit,  to issue an ultimatum through a letter to the management  on the 6th of June, 2019 and copied the Secretary to the Government of the Federation (SGF) to address poor welfare leading to incessant death which several dailies and online news media have made headlines with.
Hence, in order to get it right, Federal government should increase funding of the commission and  carry out a comprehensive audit of the activities of the commission with biase  for her nominal roll and payroll from January 2015 to date to ascertain the veracity of the so called replacement claims of management vis a vis illegal recruitment; and to look at the epileptic renumeration pattern of the NIMC with the view of stopping executive thieving and implementing the paramilitary salary scale approved by the National Salaries, Income and Wages Commission for the Commission. Investigate the genuineness of the commission’s integration into IPPIS and why certain allowances like hazard and overtime are not paid. The first 28days allowance for new employees have not been paid for over 5 years now. There is serious need to unravel the mystery surrounding it, the refusal of the management to pay yearly steps increment and why promotion arrears the government paid other MDA’s didn’t include NIMC employees.
It is imperative that records are set straight and the right thing be done to protect the security of the identity system in the country.