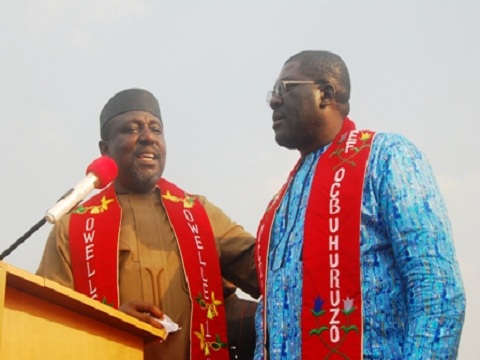 In functional politics, there are so many unpredictability’s than in any other human endeavor. According to V.O. Kay, a renowned political Scientist of American extraction, “since politics centers round the behaviours of human beings and since human beings are very unpredictable, there is no reason to have a firm reliability on the collective or individual behaviour of persons of individuals”.

More so, if this could be narrowed down to Imo state, since the creation of the State, in 1976 circumstances surrounding the office of Deputy Governor have been a matter the outcome of complexities .

For example, when Chief Sam Mbakwe was nominated to run for the office of the Governor, because he was from Okigwe zone, it was imperative on him to pick his running mate from Abia in order to balance the ticket. He picked one Dr. Bernard Amalaha, the senior Lecturer in Alvan Ikoku College of Education. After the election, Chief Sam Mbakwe of NPP won with a landslide victory. Unfortunately, his opponent, Dr. Nwakama Okoro, from Umuahia zone, went to court to protest. His argument was that since Amalaha was not properly qualified to run with Mbakwe because he was found deficient for not paying his tax as and at when due, he was not qualified. However the court did not find it proper to nullify the election of Mbakwe on that ground, rather it disqualified Dr. Bernard Amalaha and allowed Mbakwe’s election to stand due to what the court termed, in the interest of political justice and not legal justice.” (Political expediency) by Oputa.

Of course, if the court had nullified the election, in fact, the entire State would have been thrown into unmanageable precipitation and anarchy, because of the popularity of Chief Sam Mbakwe.

Mbakwe was asked to nominate another Deputy Governor. He nominated perhaps one of the oldest persons in Imo to hold that office, one Chief Isaac Uzoigwe, whose greatest performance to Mbakwe’s administration was to be “blessing Kola nuts at every function where the Governor or the Government was involved.” He served Mbakwe until when his government was truncated along with the Federal Government of Shagari by today’s Buhari.

When it was time for Udenwa to go, there was uncertainties surrounding the selection of Ebere Udeagu. Although there were so many speculations about his selection to replace his boss, Achike Udenwa. Sp many persons showed up to vie for the position. Ordinally, if Achike Udenwa has stamped his feet of the ground, Ebere Udeagu would have sailed through. But he did not because of what many political pundits and insiders termed the solid opposition to Ebere Udenwa by the Governor’s wife, who wielded a lot of power within the “palace”. Besides, Udenwa could not overcome such mountainous challenges, when the election came, there were so many katakata in PDP to the effect that even to select a Governorship was problematic. There were about sixteen Governorship aspirants. The party could not solve the problem. They carried their wahala to Abuja where the then President, Olusegun Obasanjo twisted their hand and made a choice for them, tossing Chief Ikedi Ohakim. Of course there were so many inconclusive jingoism which went on resulting in Ohakim of PPA winning the Governorship race in a heavily PDP dominated State. He chose for the first time a female Deputy Governor, Dr. Mrs. Ada Okwuonu from Mbaise because he was looking for Mbaise block votes.

He, Ikedi Ohakim completed his first term of four years and was going for second term. He dropped Ada Okwuonu and instead picked a towering female professor of biological sciences, professor Viola Onwuliri from Mbaise.

Of course, Ohakim’s campaign did not fly because of intricate and multiple conspiracies against him, people believed was as a result of his role of not supporting Jonathan when he was struggling to become the president when the President, Yar Dua was mortally sick. Majority believed that the failure of Ohakim to be re elected must be laid down at the door step of Goodluck Jonathan. Of course, many have different opinions. But if one may read a book entitled, “democracy by Military tanks,” by Okere, one could confirm or change one’s perception and conclusion.

Owelle got the ticket to run under APGA, which many believed would have gone to Agbaso, who in twists and turns of political maneuvering nominated his younger brother who had absolutely little or nothing about the chemistry of Imo politics. Okorocha out smarted the two Agbaso brothers and ran with Jude Agbaso as the Deputy. Many believed that he did that merely to but time. And at the appropriate time, he used the most docile House of Assembly to impeach the Deputy Governor on Phantom charges. He was removed. And indeed the most preferred person, Prince Madumere was chosen as the Deputy Governor to Okorocha.

It was the opinion of the generality of the members of the public, but for the outstanding personal qualities of Prince Madumere, including his inexhaustible patience and undiluted loyalty, he would have been pushed out by overbearing First Lady of the State.

Indeed, when Prince Madumere became the Deputy Governor to Owelle in March 2013, nobody ever thought that his relationship with Owelle would take a beating for the worst for so many reasons. He was very confidant of Owelle long before Owelle became the Governor. Their relationship was not only tight but also invincible. Evidence are bound that he contributed substantially to Owelle’s ascendency to the type of success he accomplished, including becoming the Governor

However, according to Michael Has, “in politics which is basically a pursuit for self interest, when two interests collide, anything can happen.” Indeed, nobody could believe that one day Owelle and Madumere could be at each other’s throat, politically.

This was surprising because before both parted ways, Owelle had at several for assailed Madumere with several compliments including, referring to him, “as my headache free Deputy Governor.” At one time, a writer has referred to Madumere as, “a cooling system in Owelle’s restive government.” In fact, many people in Imo State knew that Madumere because his striking qualities had enjoyed the admiration of many Imo citizens. Nobody was in doubt that Prince Madumere would get Owelle’s support as his replacement. Unfortunately Owelle had a different political agenda to establish political dynasty, beginning with his son in law, Uche Nwosu.

It is on record that so many efforts and series of advice were made to Owelle to change his mind against Uche. He could not succumb to accepting wise counsel. Because, he under rated Madumere’s capacity to oppose him openly.

The disagreement came to a head when Owelle told Madumere to contest for the Imo East Senate sit which he rejected by towing on Owelle their trade mark neck muffler.

From then, both knew that the game was up. Madumere had formidable opposition members of APC waiting to support him because he was the right person..

They formed a coalition of APC strong members which indeed succeeded in check mating Owelle to his astonishment. Today, Prince Madumere is very popular in Imo State for his stand. If nothing, Owelle sponsors Madumere impeachment failed woefully. Because according to one Igbo proverb, “one day, monkey will go to the market and will not return.”

Today, and on the 29th May, prince Madumere will remain as deputy Governor of Imo State. Without doubt, he `would be present at the handover ceremony as outgoing Deputy Governor of Imo State and will be so recognized.  After that day, he is likely to be the first name on the list of those to be considered for Ministerial appointment by Buhari from Imo State. And he is likely to get a Ministerial slot because he has remained a very faithful party person, loyal and committed. After all, “he who laughs last laughs best.”