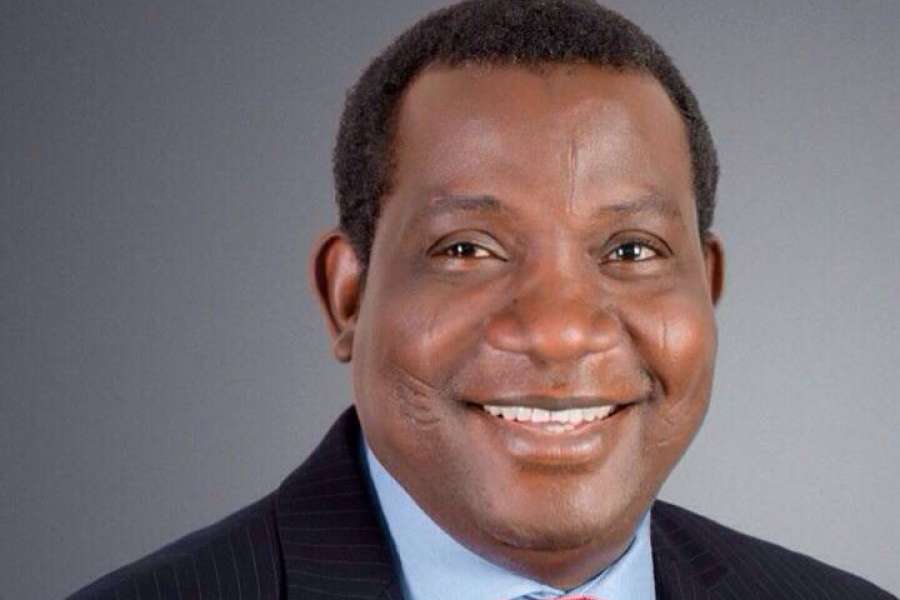 TEXT OF PRESS BRIEFING BY THE CHAIRMAN OF THE PEOPLES DEMOCRATIC PARTY (PDP) PLATEAU  STATE, ON TUESDAY, 11th DECEMBER, 2018.
Gentlemen of the press,
It is both an honour and a duty that I address you today the 11th day of December 2018, in the course of our struggle as a people with shared political values and common ideals in this chapter of our democratic journey.
Our hearts are burdened by some disconcerting issues which if left unchallenged can further retard our political development as a state.
With every sense of responsibility, I hereby alert the people of Plateau on the dangerous plot by Governor Simon Lalong and the APC to regress and destabilise our democratic journey.
You will all remember that on the 10th of October 2018, the state government through its agency Plateau State Independent Electoral Commission (PLASIEC)  conducted the local government election in thirteen of the seventeen LGAs. It was an election characterized by brazen and highly provocative  irregularities.
As the credible and acceptable alternative platform for the true expression of our people’s aspirations, the PDP sounded the alarm on the outcome of that charade.
After carefully analysing the results across the 13 local government areas, the party decided to approach the tribunal set up to handle petitions arising from the election. Our goal as the true democratic representatives of the downtrodden and oppressed people of Plateau was and still remains to retrieve our stolen mandate freely and willingly given to us by the people.
Following the inaugural sitting of the  tribunal on the 23rd of November, 2018, it became clear and obvious to us that the  number of petitions before the tribunal was overwhelming high and unprecedented compared to  those filed in previous local government election tribunals.  We therefore saw the compelling need for additional panels to handle the these petitions within the time frame legally allowed otherwise most of the cases would lapse by effluxion.
That was why the PDP as the petitioner applied to the Honorable Chief Judge of Plateau through  a letter dated 3rd December 2018 for additional panels to be constituted to compliment. Thankfully, the Honourable Chief Judge has acknowledged and replied to our letter.  We remain hopeful that he will act accordingly.
Ordinarily, we would have heaved a sigh of relief since our petitions are already before the tribunal. However, we are mindful of the fact that the tribunal is working within a time frame in determining the cases before it.  We believe that  justice can only be done and seen to have been done if all cases are  attended speedily and appropriately.
Gentleman of the press,  we are also concerned  that even while we are challenging the irregularities through legal means, PLASIEC is still very busy working on ways to circumvent the law. We have it on good authority that it is attempting to perfect its false and doctored results sheets by offering between five-to-ten thousand Naira each to presiding officers and party agents who took part in the election  for their signatures to authenticate these clearly fake documents.
But the question that readily comes to mind at this stage is: Will PLASIEC be also so shameless and reckless to compromise the security agents who had already signed the authentic election results to change their minds?
The desperation in PLASIEC is boundless as it tries to make a crumbling APC government in Plateau look good and acceptable.  As far as the PDP is concerned, the real results of the LG elections are the clearest  and loudest referendum yet on the Lalong administration. And the people have strongly given this simple message: LALONG, REJECTED; LALONG, TIME UP! LALONG, GO HOME.
No matter what PLASIEC does now can never change the sound and message of the Plateau people in this election.
We counsel the Governor and his party not to plunge the state into another needless political crisis  in their  desperation to hold on to power. In this wise, we have  received credible information to the effect that agents of the APC are inviting people to surrender their Permanent Voter’s Cards (PVCs) for amounts ranging from three to ten thousand Naira.
These cards will then either be destroyed, rendered inoperable or cloned to deprive their owners from using them to vote out the APC.
This is a condemnable and dangerous plot. But it is also hardly urprising since APC prefers sharing out corrupted funds rather than give solid governance results to Nigerians.
May I use this opportunity to specifically appreciate all lovers of democracy, friends of Plateau and indeed the  people of the state for your goodwill to PDP. We thank you for motivating us on and urging us to use our good offices, contacts and every legitimate means available to halt the reckless march towards the precipice by Governor Lalong and his agents.
Together, we shall resist the adversaries of our promising democracy.
I call on all party faithful and the good people of Plateau State to remain calm and law abiding, while at the same time standing strong, resolute and resilient in the face of injustice, harassment and intimidation.
Thank you all and God bless .
Sign
Hon Amos Gombi Goyol
Deputy Chaiman
Plateau State
On behalf of the state Chaiman.