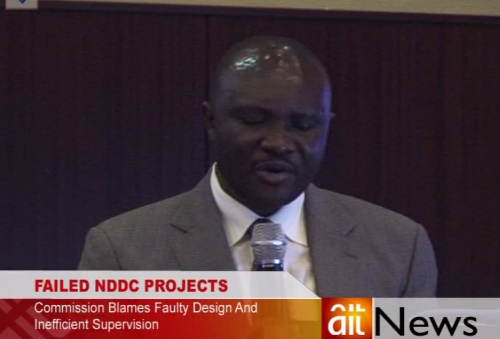 Justice Saliu Seidu of the Federal High Court sitting in Ikoyi, Lagos, on Friday,  November 16, 2018 granted bail to a former Executive Director on Projects,  Niger Delta Development Commission,  NDDC,  Tuoyo Omatsuli and one Francis Momoh in the sum of N100m each.

The defendants are facing trial on a 45-count charge bordering on conspiracy and money laundering to the tune of N3, 645, 000, 000.00 (Three Billion, Six Hundred and Forty- Five Million Naira) only.

Omatsuli and Momoh, who were charged alongside their companies, Don Parker Properties Limited  and Building Associates Limited respectively, were said to have shown personal interests in the consultancy contract awarded  to Starline Consultancy Services Limited by the NDDC, thereby enriching themselves unlawfully.

The defendants, however, pleaded not guilty to the charge when it was read to them.

Counsels to the defendants had, at the last sitting on November 8, 2018, applied for bail on behalf of their clients.

Consequently, the Judge had adjourned to November 16, 2018 (today) for hearing of  the bail applications.

In his ruling on the applications today, Justice Seidu granted bail to the defendants in the sum of N100m (One Hundred Million Naira) each with two sureties in like sum. The sureties must be residents in Lagos.

One of the sureties must be a civil servant and a blood relation of the defendants, who must have a landed property in Lagos with the Certificate of Occupancy, C of O.

The other surety must be a Deputy Director in any Ministry in Lagos.

The defendants were ordered to submit their international passports to the court’s registrar.

The Judge also held that the court’s registrar and the prosecutor must be satisfied with the sureties.

The Judge ordered the defendants to be remanded in prison custody pending the perfection of their bail conditions.

The matter was adjourned to January 8, 2019 for commencement of trial.