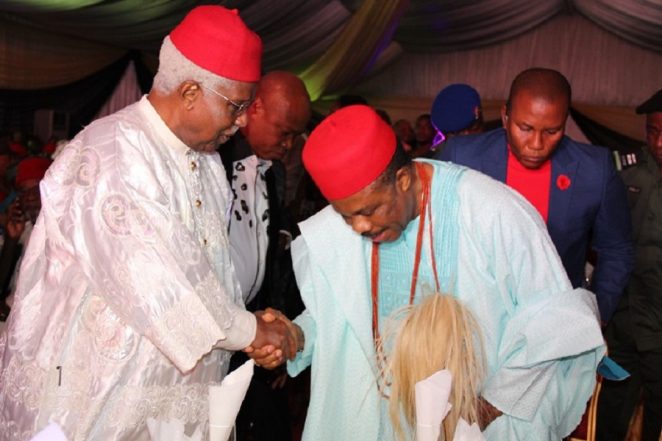 In the game of football, the First Half might be a mix bag of results. Sometimes, great coaches show their hands early enough with sound tactical formations and deft strategies that stun the opponent. But sometimes too, all a great coach does is to adopt a cautionary approach that would enable him study his opponent, detect the weak-links in his tactics and chisel out a counter strategy that would take the opposing team apart in the second half. Both strategies are good. The difference is in the coaches.

A two-term political office compares to football in many ways. We have seen some political office holders who hit the ground running from their very first day in office. We have seen such people demonstrate so much sure-footedness and mastery of the game that the only option they leave us is to clap. But we have also seen good leaders who spent almost their entire first term getting familiar with their new position and imagining a brighter future into existence for the people. Sometimes they eventually get off to a roaring start and win the support of the people. Sometimes too, they never do.

Governor Willie Obiano belongs to the first group. He is among the coaches whose mastery of the game is so complete that they know just what to do once the kick-off whistle goes off. Indeed, any fair-minded assessment of Willie Obiano’s first term in office cannot return a verdict of non-performance. Mbanu! Even Obiano’s harshest critics will have enough prodding of conscience to admit that indeed, Anambra has shifted from one point in the development paradigm to another. This is a fact! The frequent endless comparison of his three and a half years to his predecessor’s eight years is a clear indication of the huge impact he has had. Mathematically, it is odd to compare three years to eight years. That should perplex even the most curious analyst. The comparison only became necessary because Obiano has left us many touchstones of excellence. And this is another fact!

Indeed, Obiano’s blaze of excellence began with his decision to head-butt criminals out of the state. He spared no effort in this regard, going as far as to Israel to get a security expert that laid the structural framework for Operation Kpochapu and other winning strategies. The result has been phenomenal. Anambra has become Nigeria’s safest state. The US Ambassador, the German Ambassador and the UK High Commissioner have all attested to this fact. The Chinese chose a different and more profound way to demonstrate their agreement with this fact. They are investing $5bn in the construction of an airport city in Anamabra State. There is no stronger way of saying, “I believe in you,” than this. On completion, the Anambra Airport City Project will be the single most ambitious initiative in Africa because it would have successfully relocated a project that is only seen in advanced societies to black Africa. Watch out for this project! Africa has seen nothing like it yet from Cape to Cairo!

One of the confounding paradoxes of Anambra State had been that for over twenty years after it came into existence, Awka, the state capital had looked like a local government headquarters. There was absolutely nothing about Awka three years ago that presented it as the capital of one of Nigeria’s pre-eminent states. Nothing! For all his vaunted achievements that his Facebook tigers never cease to drum into our ears, former governor Peter Obi left no landmarks marks in Awka. I can think only of the tacky pedestrian bridge at the UNIZIK Temporary Site junction. Beyond that, Obi left no monument in Awka. But in less than three years, Governor Obiano had left indelible footmarks on the city. The broad, gleaming highway from Amawbia to Amansea and the three picturesque bridges announce the greatness that is to come. True, the inner contours of Awka still beg for a touch of modernity. But at least, a visitor can no longer drive through Awka without scratching his head at the emerging promise of a 21st Century city. This is progress!

Sincerely though, what may well be Obiano’s greatest contribution to modern democracy is his widely acclaimed Choose-your-Project initiative for every community in Anambra State. This is something that no other democratic leader has done before. Through this initiative, every known community in Anambra State has been touched by the Obiano administration. These communities were asked to choose any project that was dear to them which the government would build. There could be no better way to bring government closer to the people or allow the people the space to exercise their freedom of choice. With this initiative, Obiano has wiped away the tears of neglect from far flung communities and endeared government to the people. Already, the second round of these projects is in progress and there might be a third or fourth round when the governor is re-elected back to office in November. This development model is already being seriously considered for a wider adoption as an effective model of development for the Third word countries. This is something that we should all be proud of.

Indeed, Obiano showed that he’s no ordinary leader also in his bold effort that changed the single story about Anambra with one swift visionary stroke. Until he assumed power as governor, no one remembered Anambra in agricultural production. But Obiano’s battle cry resounded at Nteje in May 2014 when he used the launching of a new planting season to kick-off his agro-revolution. Since that day, Anambra has flowered under his watch into an important location on the agricultural map of Nigeria spawning the famous Anambra Rice brand and a vegetable export programme that made headlines across Africa. Today, Agriculture alone has attracted investments valued at $1.2bn and generated jobs in multiples of thousands. Obiano also made farming attractive to the youths and about 24% of the state’s 106,000 farmers are youths. Thus we see a paradigm bursting governor who is not content with threading a well-worn path but prefers to carve out a thoroughfare in the forest for himself. It takes genius to change a single story!

In much the same way, the soar away success story of Anamabra State Investment Promotion and Protection Agency (ANSIPPA) is also something that the Obiano administration has set itself apart with. The story is almost unbelievable… a crime-ridden state from where businesses had fled in droves has suddenly turned 360 degrees to become the single most attractive investment destination in Nigeria in less than three years. Obiano’s decision to establish ANSIPPA and staff it with some of the brightest minds in investment banking speaks to a leadership competence that is rare in these parts. ANSIPPA has since attracted investments valued at several billions of dollars into Anambra State. It has also been one of the most widely adapted case studies in our contemporary times.

Indeed, Obiano’s trademark of excellence shone like a billion stars once again with the Light-up Anambra campaign. The truth is that Anambra presents a fascinating mosaic in urbanization in contemporary Nigeria. Outside Lagos, there’s probably no place else with as much bold claim to urbanization as Anambra State. Anyone who is familiar with Anambra State can tell that the entire stretch from the Niger Bridge to the boundary with Enugu at Amansea is completely urbanized along the old Enugu-Onitsha road. Sadly, until Obiano’s assumption of office, no serious effort was made to install streetlights along this road which connects so many important towns and communities most of which have since shrugged off their rustic outlooks. Almost every town along this hub busts at the seams with trade and commerce. But with the Light-up Anambra campaign, Governor Obiano has practically lit up almost every nook and cranny of the state. All around Anambra, the streets dazzle at night to remind residents that they have a government that cares about the little things that matter.

Although many people might look at it differently but Obiano’s regular payment of salaries in the midst of recession is also a huge part of these little things that matter in a free enterprise economy. It is not uncommon to hear some opposition elements deride the regular payment of salaries as something that should not be celebrated but more often than not, they forget that Obiano is also the only governor in our recessional economy to had increased workers’ salaries and continued to pay as and when due to date. No one who has worked in places where salaries are owed can look down on regular payment of salaries no matter how small. Obiano’s establishment of a strong mass transit system with big buses to link up the three major cities in the state is also a direct effort that addresses workers’ welfare. His clearance of all arrears of salaries, pensions and gratuities that were long in dispute shows him as a leader who has a deep empathy for the people. So, what cannot be gainsaid is that Obiano has shown enough sensitivity to things that matter and enough resolve to heal the wounds of the past. Even if we don’t agree with this, we lose nothing if we acknowledge it.

Finally, Obiano’s leadership of APGA has also been widely acknowledged as above average. Since he became the Chairman Board of Trustees and National Leader of the party, the party has enjoyed relative peace. There has not been a repeat of the past dispensation where the former governor and the National Chairman of the party were holding each other by the scruff of the neck. Apart from the minor skirmishes sponsored by fifth columnists who wanted to cause a mild confusion in the party before the last primary election, APGA has been very stable under Obiano. The party has enjoyed a degree of stability and internal peace which had eluded it in the past. The last convention of the party that produced a single unopposed candidate in Governor Obiano perfectly mirrors its internal peace and harmony. It is to Governor Obiano’s credit that finally, APGA has been able to manage its own affairs and stands a better chance at breaking out to seize territories outside of Anambra State.

These are just a few of the major achievements that have made Governor Obiano’s first term in office an outstanding experience to any observer who has followed developments with an open mind. Any fair minded observer will never fail to admit that indeed for Governor Obiano, these past four years have been an outstanding First Half in a two halves GAME!