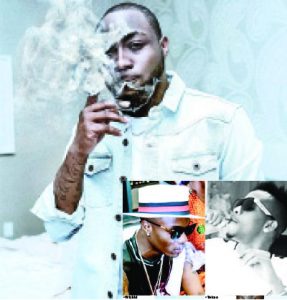 The deaths of three associates of Nigerian hip hop sensation, David Adedeji Adeleke popularly known as Davido has brought to the fore the disturbing claim of prevalence of hard drug use and alcoholic drinks among entertainment stars in Nigeria.

Davido attracted negative publicity penultimate week following the sudden death of one of his friends, Tagbo Umeike. Tagbo reportedly died in a controversial circumstance on the eve of his birthday, with actress Caroline Danjuma, who is alleged to be the girlfriend of the deceased, claiming that Davido had questions to answer on Tagbo’s death.

Davido’s camp’s claim that his friend died after taking excess of Tequila, a brand of alcoholic drink made from the blue agave plant was pooh-poohed by the result of the autopsy carried out on the deceased by the police. The result, according to the police, showed that Tagbo died of suffocation and not drunkenness.

But if the autopsy report dims the correlation between Tagbo’s death and alcohol, the death of another friend, Olugbemiga Abiodun, aka DJ Olu and one Chime Amaechi, who was reported to be a member of the young singer’s crew, three days after Tagbo’s controversial death, has further accentuated the prevalence of hard drug abuse among artistes and their associates.

The police, last week, recovered substances suspected to be hard drugs from a car in which Abiodun and Chime died. The deceased were found dead penultimate Saturday in a BMW car in a garage on Block B, Banana Island, Lagos.

Their journey to stardom, though may be tortuous, requires a lot of perseverance but achieving and maintaining untainted records having reached the peak of their careers continue to remain elusive to most entertainment stars with drinks, drug and s*x being their major pitfalls.

For many, club houses and joints where ladies swarm round them almost unclad and where hard drugs and cocktails of different hard drinks can be easily got remain the slaughter slab for many of these idolized music stars.

Most Nigerian entertainment stars have had to deal with s*x scandal at certain point or the other in their careers.  The yoke of baby mama syndrome hanging a round the necks of a good number of the nation’s entertainers bears eloquent testimony to this injurious habit.

Sunday Sun investigation revealed that hard drugs are more prevalent and cheaper as they are on sale at most night clubs all over Lagos.

According to sources, the drugs could be purchased at the notable joints such as New Afrika Shrine in Ikeja despite a big signpost saying drugs are not allowed in the club.

Also 311 Road in Festac Town, Lagos and some other major night clubs on the Island remain hotspots for drug vendors and users.

For hard drinks, sources informed Sunday Sun that many Nigerian entertainers no longer derive satisfaction in single brand of drink as many have developed insatiable desire for cocktail of different brands.

According to experts, hard drugs work as central nervous system (CNS) depressants by slowing down neural activity in both the brain and the body. The brain and spinal cord make up the two main organs in the CNS. Narcotics effects are believed to cause the nervous system to slow down.

They cause cardiovascular conditions ranging from abnormal heart rate to heart attacks, nausea, vomiting and abdominal pain. In most cases, hard drugs cause the liver to have to work harder, possibly causing significant damage or liver failure.

Different drugs are said to have different effects on the body system ranging from hallucination, depression, liver and kidney problems and fits. Some illegal drugs are known to kill the first time the person takes them.

Other dangers of using hard drugs include decreased performance in school, behavioral problems, crime and violence, lack of good judgment, health problems, brain damage and lastly, but not the least a descent into drug abuse and alcoholism.

Narcotics are known to contain alkaloids, which are powerful poisons. There are more than 800 known alkaloids. Alcohol and tobacco, as well as opium and marijuana contain these poisonous alkaloids.

In view of the danger inherent in the use of these drugs, which militate against the normal functioning of the body organs and the nervous system, and definitely slow down the movements of the body, the question arises as to why people use narcotics.

Experts say many people use narcotics because they claim they get a “lift.” While others claim they use certain drugs as a matter of social custom.

Although the use of illicit drugs is not a new trend, it is growing at an alarming rate, with more entertainment stars embracing its use for varying reasons.

Apart from the claim that drug users get Dutch courage from hard drugs, findings by Sunday Sun also showed that the availability of some of these hard drugs and drinks in Nigeria is also responsible for its abuse.

In the past, Indian hemp, cocaine and heroin were the common drugs. However, these days, they come in different forms and names with the youths experimenting with all sorts.

Legendary reggae singer, Majekodunmi Fasheke, aka Majek Fashek remains a major reference point of the evil of hard drugs to youths treading this perilous path. In 2015, it was revealed that Fashek battled with drug addiction and was admitted into a drug rehabilitation centre in Abuja after admitting that he needed help.

On November 17, 2013, Nigeria lost a rising music star in Olufemi Mayomi, aka Fada U-turn. He was reported to have died after a long battle with kidney disease. He was rumoured to have used hard drugs.

Fada U-turn’s death was preceded by the demise of another music star, Susan Oluwabimpe, popularly known as Goldie Harvey. Goldie died on February 14, 2013, just hours after she arrived from Los Angeles, where she had gone to experience the Grammy Awards. Although the result of the autopsy carried out on the late singer indicated that she died as a result of an “intra-cerebral hemorrhage” caused by “hypertensive heart disease”, rumour also linked the talented singer to hard drugs.

Similar allegation also trailed the late rap music star, Olaitan Oladapo, popularly known as Dagrin, who died exactly eight days after he was involved in a ghastly motor accident in front of Alakara Police Station, Agege Motor Road, Mushin, Lagos. He survived a serious head injury as a result of the crash and was initially admitted at Tai Solarin Hospital, Mushin, before being transferred to the Lagos University Teaching Hospital, (LUTH), Idi Araba, where he later died.

The prevalence of hard drug use and alcohol among music stars according to Pastor Nathaniel Okafor, national coordinator, Rescue the Lost Mission, a Christian organisation dedicated to assisting drug addicts, is underscored by the false impression that hard drugs imbue them with confidence needed to be able to face the crowd while performing.

“It is a total misconception to nurse the belief that hard drugs aid artistes to overcome stage fright. What most hard drugs do is actually to confound their sense of reasoning. This is what most of them erroneously interprete as confidence-boosting function of hard drugs. Unknown to these youths the damaging effects of hard drugs on their health and careers far outweigh the flawed belief they tend to have in them,” Okafor submitted.

Okafor’s view was echoed by a one-time President of the Performing Musicians Association of Nigeria, PMAN, TeeMac Omatsola Iseli. The renowned flutist noted that only immature musicians would resort to taking hard drugs to boost their confidence level before taking to stage.

“I would say that applies more to immature musicians. For a professional like me who studied music for 12 years and holds a degree as a concert flutist and a degree as a philharmonic composer and also a PhD, I don’t need that because I am self-confident. When I go on stage and I face 100,000 people or I face cameras, my heart pumps adrenaline and then, I don’t need any drugs to perform well. But when you are not a trained musician and you’re shy, then you get into drinking or drugs to gain self-confidence. But you don’t realize that when you’re drunk or stoned, you’re actually reducing your capability to perform well,” Iseli said.

Attempts to get the reaction of the National Drug Law Enforcement Agency, NDLEA, proved abortive as calls to the mobile line of the agency’s spokesperson, Mr. Jonah Achema, were not answered even as a text message sent to the same line was not replied, as at the time of filing this report.