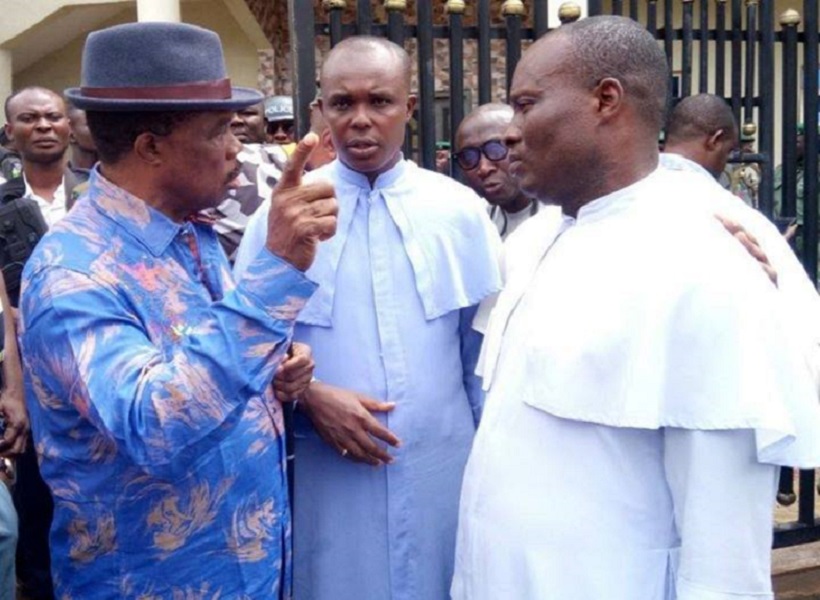 It is most correct to conclude that in the 25 years of Anambra State, no singular act of impunity has jolted the sensibilities of the residents of the state as much as the shocking reality of the Ozubulu  early morning killing and maiming of Christian worshippers on Sunday, 6th August, 2017. The heartrending incident occurred at St. Philip’s Catholic Church, Amakwa-Ozubulu, a semi-urban town in Ekwusigo Local Government Area of the state. Eye witnesses who had a narrow shave with death reported that a lone gunman went on rampage shooting unwary worshippers. No words can be tendered to diminish the evil in the impious and hellish outburst which voided the humanity of the perpetrators (remote and immediate) and violated the sanctity of life of a people who, for over three years running, pride themselves as living in the safest and most peaceful state in Nigeria. It was indeed a black Sunday as Ndi-Anambra gathered in small circles bemoaning the killings, mourning the dead, expressing sympathy with the wounded and the families of the deceased, while contemplating the ominous possibilities consequent upon the incident. Their core value, the primacy of life, was defiled and their faith in the much touted protective shield of government quivered.

The palliative the people urgently needed at the moment soon came in the swift reaction of Gov. Willie Obiano whose prompt visit to the scene and assurances that his administration was fully committed to unraveling the doers and making them face the full wrath of the law sounded most reassuring to Ndi-Anambra. The frustrations shrouding the people’s psyche were further assuaged by the hope drawn from the Governor’s bold stance in confronting the festering feud involving a few Ozubulu indigenes.

Apart from Chief Obiano’s stern abhorrence for traits of insecurity, his velvety humanness was at the fore in his soothing visit to the hospitals where the injured were receiving treatment. There, he deployed the services of extra fifty medical doctors to interface with the hospitals’ staff in containing the emergency; Anambra State Government would pick the bills for the special intervention and other incidental medical costs upon the shooting. Though the turn of events that Sunday was most impromptu, not a few persons were pleased with the Governor’s spontaneity in effectively taking charge of the damage control. His State Broadcast the following day isolated the case as detracting from the general congenial security ambience of Anambra; it reiterated the administration’s commitment to routing criminality in the state. Chief Obiano emphasized that his findings erased ‘the fears that the incident may have been caused by either some terrorist organizations or some members of some groups of agitators in the country.’ In maintaining that Anambra is getting increasingly ‘too hot for criminals to operate in,’ the Governor, in absolute terms, declared that the Ozubulu case would be ‘the first and last of such appalling crime’ in the life of his administration.

As would affected speculations in Will Durant’s submission that ‘the cause of our contemporary pessimism is our tendency to view history as a turbulent stream of conflicts – between individuals in economic life, between groups in politics, between creeds in religion, between states in war;’ some willful narrators of the Ozubulu incident, sworn to controversial bents in an otherwise bare information pool, are on the prowl. They impugn the Governor for strategically leveraging on the available information in managing an immediate situation; but they would not recognise his due deference to the appropriate security quarters for the application of forensic investigative schemes. Obiano’s detractors lend voices to the smear campaign against him and Government of Anambra State for an unduly hyped association with person(s) fingered in a subsisting imbroglio in Ozubulu town. But Obiano belongs to Ndi-Anambra and is wont to extend a hand of fellowship, albeit on official note, to Anambra persons who are not known to him as proven outlaws; more so when the common object of interface is community development.

While we understand that some politicians readily mine from the gullible disposition of the greater majority out there by latching onto any subject that gives them (the politicians) visibility, stoking avoidable controversy in a situation that involves lives is eternally deplorable and condemnable. When selfish inclinations, even in their subtleties, seek to undermine the general wellbeing of society, it takes affirmative action, such as Chief Obiano’s, to save it. Again, Durant’s counsel that sensational reportage should be disregarded in favour of the essence of the ordinary message appears apposite here. According to him, ‘if we turn from the Mississippi of strife, hot with hate and dark with blood, to look upon the banks of the stream, we find quieter but more inspiring scenes … History has been too often a picture of the bloody stream. The history of civilization is [however] a record of what happened on the banks.’ Evidently, Chief Willie Obiano, by his precepts and acts in governance, votes for the happenings on the banks which essentially define civilization. The spate of development in Anambra State under Chief Willie Obiano’s watch bears testimony to good governance, a people’s renaissance, and a budding civilization.