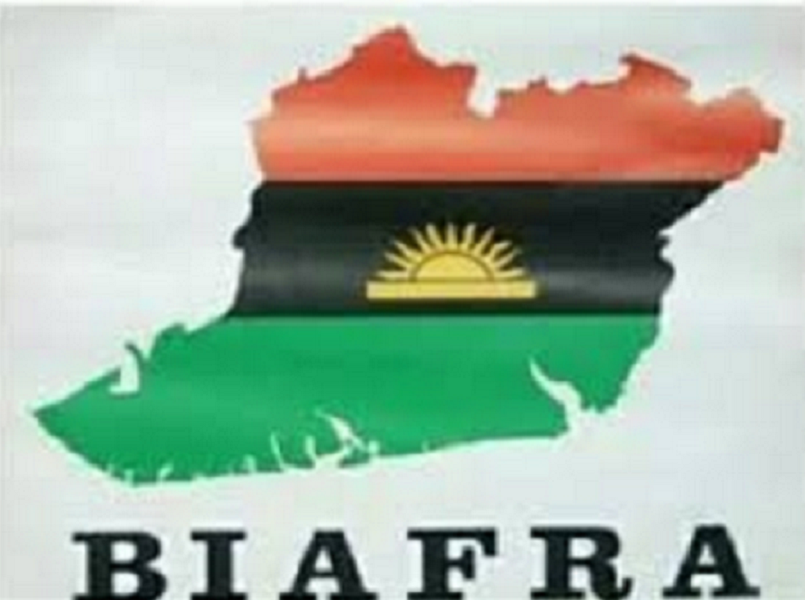 It is with a heart of joy that we the members of Biafra National Guard thank Chukwu Okike Abiama for his mercy and love upon the life of General Innocent Orji who was released after ten (10) years of unlawful detention. We appreciate Hon. Justice Ikeogu of Onitsha High Court 2 for his objectivity in the ruling which paved way for the release of the peoples General.We appreciate the resilience of all the members of Biafra National Guard who stood till his release and also those that carried on with the struggle for the restoration of Biafra in his absence.

We are aware that Gen Innocent Orji was dismissed as a Second Lieutenant in the Nigerian Army for the sake of Biafra and has everything it takes to endure the physical persecution he passed through for ten years in detention. We never doubted his resolve in defending Biafra. The journey towards Biafra restoration has been made easier with the coming of Nnamdi Kanu whom the General believes is the long awaited leader. General Innocent Orji remains the defender of the people of Biafra and also holds the mandate of the safety of the leader the people of Biafra chose for themselves.

While the wife of General Innocent Orji, Mrs Onyekachi Orji, his cousin sister Okwudili Bassey (arrested on 11th April 2007- the day she came to collect her school fees), a crippled member of BNG, Micheal Okezie and other members of Biafra National Guard still detained by Federal High Court2 Awka; we won’t relent in pursuing their release and neither will Gen. Innocent Orji be deterred. We also urge the trial Judge handling their case, to as a matter of justice release them and acquit them of the alleged treasonable felony charge.

The most important thing to take home in the case of Gen Innocent Orji is the fact that the trial judge technically admitted that the activities of Biafra National Guard are primarily for self-defense and the launching of Biafra shadow Government by Gen. Innocent Orji is in accordance with the 2007 UN Charter on the Rights of Indigenous People. The trial Judge in his wisdom discharged and acquitted our General.

It is on this premise that Biafra National Guard remains the tool for self-defense in Biafra agitation and that it shall remain because it is contained in the 2007 UN charter. The people of Biafra continue to face death; incarceration, forceful disappearance and these in totality contradict or oppose tenets of human rights. Self determination is the inalienable right of Indigenous people and that must be respected but Nigerian government continues to neglect this right enshrined in the charter they are signatory to. In view of this; the General has vowed to defend the leader and people of Biafra; knowing that the best form of defense is attack.

Biafra National Guard is saddled with the responsibility of protecting the people of Biafra who have become species of terror and whose rights are trampled, for simply asking for self rule which is a legitimate thing; they have faced death. Biafra National Guard can no longer fold her hands and watch her people denied their rights to live. It shall be brought to an end by any means possible; Nigerian state is taking the peaceful approach of Indigenous People of Biafra for granted and that is why Biafra National Guard will activate self defense, so that people will remain alive in Biafra pending her restoration.

The General is aware of the efforts of Nnamdi Kanu to restore Biafra and have passed a vote of confidence on him as the undisputable leader of the people of Biafra. Political contractors and political leaders in Biafra land must henceforth be very careful with their utterances against Biafra agitation and her leader Nnamdi Kanu. The peoples General will not take lightly any derogatory word that is aimed to tarnish or derail the restoration of Biafra or against her supreme leader Nnamdi Kanu but accepts criticisms. The day of reckoning is fast approaching and to before warn is to before arm; Biafra National Guard is keenly watching everyone.

We the Biafra National Guard appreciate the effort of Niger Delta Militants and all other agitators but believe that total control of our various resources through Biafra restoration remains the ultimate goal. Every group must wake up now the General have returned; there would be a unified campaign towards the only language Nigeria understands. Biafra National Guard is highly in support of a peaceful resolution of Biafra agitation through a referendum but knowing that the language of peace is alien to Nigeria, we shall bring them to conformity with the language they understand. Biafra National Guard shall respond to any violation of the rights of Indigenous People of Biafra and henceforth a life of Biafran taken will be paid back in folds.

We are also calling on the Federal Government of Nigeria as a matter of urgency to release all pro-Biafra agitators incarcerated in their various prisons because freedom fighting is not a crime. If the likes of Maduka Mmadu, Chidiebere Onwudiwe, David Nwawuisi, and different pro-Biafra groups’ members committed a crime; Nelson Mandela of South Africa is not supposed to be crowned and celebrated but scorned as a criminal. Martin Luther King Junior committed a crime; Mahatma Gandhi of India also committed a crime. Time has gone when we continued to carry placards and receive live bullets and burry our own or detain our own, if Nigeria fails to release them, the day of reckoning for Nigeria is near.

We seize this opportunity to thank Comrade Uchenna Mmadu for his consistence towards Biafra restoration; he above all understood that Biafra has fashioned a front that deserves support. He has proved that he is a selfless man who wants nothing but Biafra by supporting IPOB under the supreme command of Nnamdi Kanu and Biafra National Guard urge everyone to follow his footsteps. Let IPOB be a parent group you all support or front and when Biafra is restored, everybody shall have equal opportunity for the development and sustenance of our dear nation. Biafra National Guard is not a group but a military wing of Biafra whose objective is to defend the people and bring discipline. Biafra National Guard shall no longer tolerate attack against genuine freedom fighting groups.

Finally, we urge all Biafran youths from Igbanke to Igala to get prepared for Biafra because the time is now and the day of reckoning is here. We urge everyone to come in and help restore Biafra, our nation and our future. We also warn Nigerian government to desist from any plan to re-arrest Nnamdi Kanu; Biafra National Guard pleads not but will come hard against the government in the advent of Nnamdi Kanu’s re-arrest. We are opposed to peaceful restoration of Biafra because Nigerian government doesn’t understand peaceful language.

Henceforth; Biafra National Guard won’t accept kidnapping; molestation and crimes in Biafra land, instead Biafran youths should enroll and join in the restoration cause of Biafra. The General is opposed to any form of crime and anything that would put Biafra land in a bad image and plead the youths to engage their strength to Biafra restoration project. Henceforth; Biafra National Guard shall checkmate activities of Biafran youths and will severely punish youths that defile the land of Biafra.

In 1999 Biafra agitation recommenced; Biafra continues to lose her sons and daughters without cause. Millions died in 1967-70 and thousands continue to die unjustly; Nigerian military found strength in killing us but unable to tackle any armed outfit like Boko Haram and Fulani herdsmen killing and raping our women. The massacres of Onuimo in Okigwe 29th March 2003, 30th August 2015, 30th May 2016, Aba Massacre, Igweocha massacre, Delta Massacre and Onitsha massacre, Biafra National Guard shall never let go or forgive. For the sake of the continued massacre of defenseless people of Biafra, Biafra National Guard will unveil her second agenda towards Biafra restoration.

Launching of Biafra Shadow Government is the first agenda but upon my release today; that agenda has come to an end and the second agenda shall soon be unveiled. Nigerian government must quickly listen to Nnamdi Kanu and give the people of Biafra a referendum date before the unveiling of second point agenda which shall be overwhelming.

Arewa Youths issued quit notice to our people; they killed Bridget and others and went scot-free, our people were threatened to be thrown into Lagos Lagoon by Yorubas and nobody was arrested or detained those involved. We challenge Arewa youths to carry out their threat or remain cowards forever. Nigeria can no longer stand because the center cannot hold any longer and before we soak ourselves in the pool of our own blood, let referendum take us apart or make us stronger.

Long live The Republic of Biafra