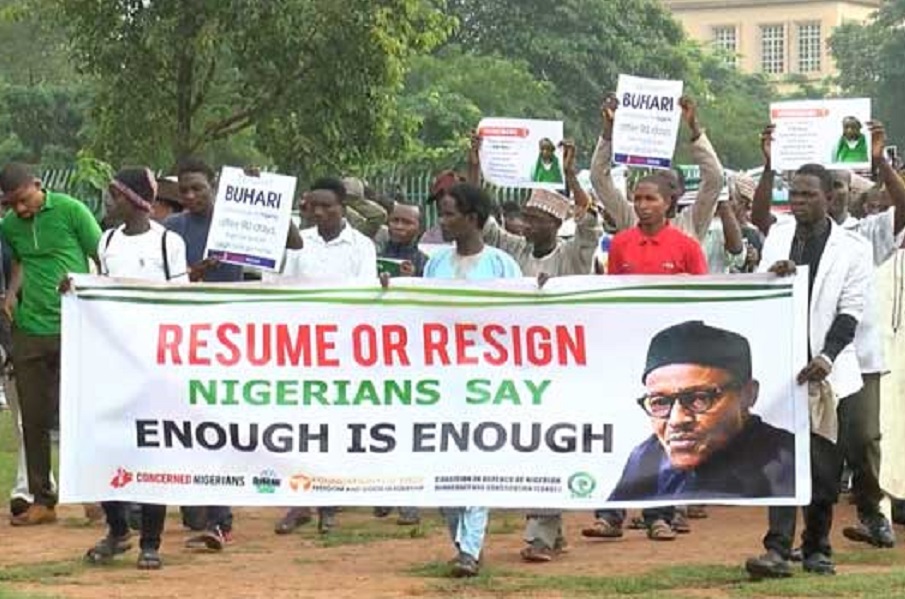 …wants security agencies to place them under passive watch

A pro-government group under the aegis of Coalition for Truth and Justice, on Sunday alleged that promoters of the ongoing protests against the continuous absence of President Muhammadu Buhari have been paid N300 million to carry out the exercise.

According to the coalition, the N300 million paid to celebrity including Charles Oputa aka Charlie Boy, Deji (Adeyanju) and (John) Danfulani, by Gombe State Governor, Ibrahim Hassan Dankwambo, a former Governor of Ondo State, Olusegun Mimiko  and other political actors in the Peoples Democratic Party (PDP), could have been better deployed to ameliorate the conditions of Nigerians facing economic hardship.

The National Coordinator of CFTAJ, Charles Timothy, at press conference in Abuja, called on security agencies to place them “under passive watch”, because the protests were being sponsored to destabilise the country.

He said, “It is true that the installment death of the corruption industry is compelling Nigerians to live within their means, which some have interpreted as hardship in the land. Nigerians should therefore task these protesters to inquire from their sponsors if the N300 million paid to celebrity activists – Deji (Adeyanju), John Danfulani and Charles Oputa aka Charlie Boy couldn’t have been better deployed to ameliorate the condition of those facing economic hardship.
“We therefore want to issue firm warnings. Because we know these protesters are mere fodders, tools in the hands of those that paid them to take to the streets, our warning is not directed at the protesters but at their sponsors. We therefore warn Gombe State Governor, Ibrahim Hassan Dankwambo and former Governor of Ondo State, Olusegun Mimiko who are the brain behind the protest against the ailing President.

“Both Dankwambo and Mimiko are entitled to throw away their humanity on the altar of ambition but they must be aware that whatever position they are desperate to attain is not worth plunging the country into crisis over. They are free to spend their money any way they want but financing urchins, riffraff and celebrity activists but truly patriotic Nigerians will not sit by and watch them plunge the country into trouble.

“We urge the law enforcement agencies to place these men under passive watch same as their foot soldiers on the streets to ensure that there is no unexpected breakdown of law and order. This does not in any way suggest that the right of Nigerians to lawful assembly should be abridged, what we are saying is that criminal elements should not be encouraged to use President Buhari’s medical vacation as a cover to wreak havoc on the streets.

“Nigeria is again at crossroads as those that are desperate to collapse the country are again at work. They have tried all manners of gimmicks in the past and woefully failed to compromise the integrity of Nigeria. Some of them have sponsored terrorism or militancy, depending on the region, and failed to use these to bring Nigeria down. They have now resorted to street protests under the guise that they are demanding President Muhammadu Buhari to cut short his medical vacation and resume duties.

“For those who have not noticed, we want to point out that these protesters are not new. They had held similar protests in the past under different names and with multiple excuses. What they have simply done this time is to rebrand their name into #ourmumudondo and add a few more desperate celebrity activists to their ranks; their driving ideology for causing chaos has not changed one bit.

“It is most unfortunate that these motely crowd of desperate people equated themselves with patriotic citizens that followed due process in staging a march to express their feeling about the performance of government. The patriotic citizens conducted themselves in orderly manner and cooperated with law enforcement to ensure their march was not hijacked. Same cannot be said for the #ourmumudondo protesters, whose thugs were confrontational against law enforcement agents from the start.

“To Nigerians, our position remains to renew the invitation to pray for the recovery of President Muhammadu Buhari and for return of peace with prosperity to the country. We appeal to citizens not to buy into the campaign of negativity being financed by the likes of Dankwambo and Mimiko.

“It is tragic that these protesters are victims of their own puppet masters, who are exploiting their joblessness to further personal political interests. We expect that people should, even when they are unemployed, interrogate the long-term plan of those asking them to take to the streets and cause mayhem. When protests degenerate into unruliness it is natural that the peace has to be maintained so these protesters were quite unawares that they were guinea pigs in their paymasters’ poltical experiment.

“Another thing that these protesters are unaware of was that their sponsors have equally mobilized thugs to join the so-called protests for the sole aim of fomenting trouble. The strategy is for these thugs to deliberately clash with law enforcement and then cause widespread violence, arson and looting that will eventually result in a breakdown of law and order. Even more worrisome is the specific request from these sponsors that the thugs must ensure there is loss of life from the protest so that they can claim that security agencies and by implication the government of President Muhammadu Buhari is killing protesters.

“To prove that these protests have motives other than the one the protesters are presenting, even the explanation by the Senate that President Buhari has not breached any rule did not suffice to educate them to desist from their foolish ways. Instead, they are heaping insults on the lawmakers simply because they could not have their way. Such intolerance smacks of people with a fascist bend of mind even when they masquerade that their actions were driven by a law for democracy. Unfortunately, their own brand of democracy does not accept a National Assembly.”