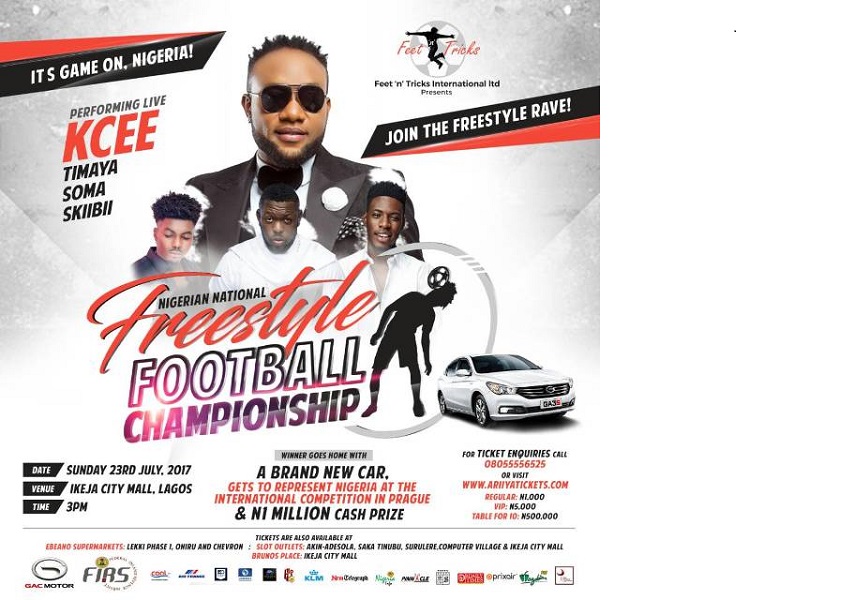 History will be made on Sunday July 23rd, 2017 as Ikeja City Mall in Lagos hosts the first Nigerian National Freestyle Football Championship in Nigeria, organized by Feet ‘n’ Tricks Limited.

On the choice of  Ikeja City Mall as the venue of the event, Nzewi said that the Mall has become the  prime destination of choice for entertainment and relaxation in Lagos, which will further be livened by activations never seen in this part of the world. “Freestyle football is all about entertainment, relaxation and competition, and we are set to create a new entertainment business in Nigeria,” Chief Executive Officer of Feet n Tricks, Odyke Nzewi said.

On Friday, Nzewi, said all plans had been concluded to stage a memorable event that Lagosians would remember for a long time.

Nzewi said further: “The concept is new here in the country but truth is the talents are here in abundance. We want to showcase those we have picked as finalists.

“Our team has been able to put in so much hard work in all areas of logistics to make the participants and fans enjoy the final on Sunday. We have some surprises too for a range of people on the day. We are excited and optimistic of a fantastic event.”

The event is being sponsored by GAC Motors, a product of Guangzhou Automobile Group Motor Company Limited and the Federal Inland Revenue Service (FIRS).

Nzewi added: “Wood has confirmed to be here because many people are excited that Nigeria is joining the big league of countries that have embraced freestyle football.

“There are other top officials of the world body coming for the event, and so we have doubled our efforts to stage a great Grand Finale come Sunday in Lagos.”

Freestyle football is the art of juggling  a football using  feet, knees, lower legs, shoulders  and the head, while simultaneously performing creative moves, without the ball touching the ground.

A former Super Eagles skipper, Nwankwo Kanu, is among the three judges to officiate the final of the first ever National Freestyle Football Championship.

A former European Champion, Daniel Mikolaj, who is regarded as one of the Top 8 freestyle football athletes in the world in the past five years, is the head of the judges. Joel Asare, who is a two-time Ghanaian champion, will also be one of the judges. Asare represented Ghana in Tokyo, Japan at the Red Bull Street world finals 2013. Another football legend, Moses Amata, has been named to join the judges’ team for the forthcoming National Freestyle Football Competition.

Thousands of entries were received via the designated registration platform where participants uploaded a 30-second video of themselves freestyling.  These video entries were subjected to a screening process by professional judges after which 16 male and eight female freestyle footballers have emerged for the July 23 finals.

The winner of the championship will go home with a salon car courtesy of GAC Motors with a million naira, and will represent Nigeria at the World Freestyle Championship to be held in Czech Republic in August.

Slated to perform at the event are renowned Nigerian performers including KCEE, Timaya, Soma and SKIIBI