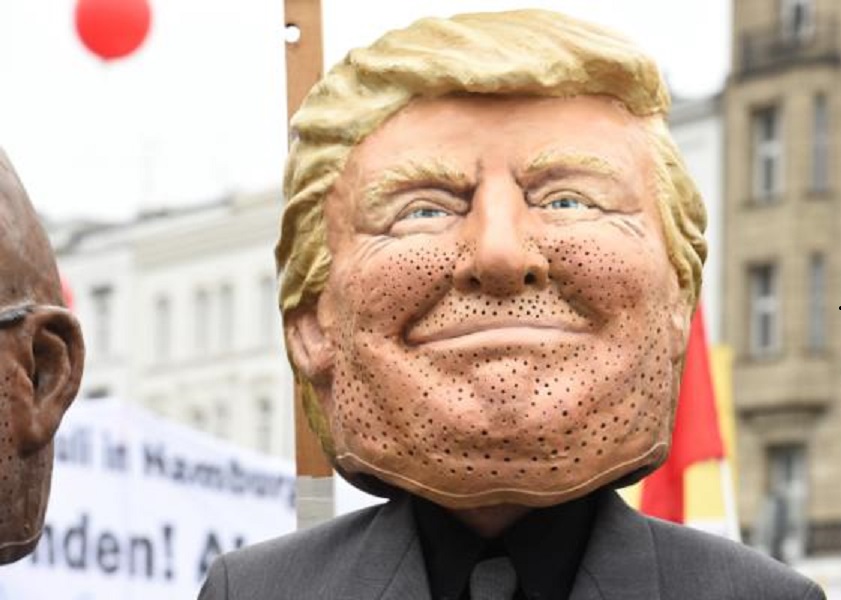 On Sunday, as President Donald Trump fired another misguided tweet at CNN by posting a doctored video, protesters rallied in dozens of cities across the United States to call for his impeachment.

In Los Angeles, they carried a black coffin draped in red, white and blue flowers, topped with a hand-written sign reading: “The Presidency 1789-2017,” NBC News reported. In Austin, Texas, protesters made their goals clear by chanting: “What do we want? Impeachment! When do we want it? Now!”

The marchers iterated the demand that has been echoed by the lawmakers and advocacy groups ever since Trump took office in January. Rep. Al Green (D-Texas), who addressed the rally in Austin, first called for Trump’s impeachment on the House floor on May 17 for obstruction of justice in the wake of Former FBI director James Comey’s testimony that Trump asked him to drop an investigation into former NSA Michael Flynn. “The President must be impeached,” Green said on the floor.

The New York Daily News quoted him as saying he was putting together the papers that would begin Trump’s impeachment process. “We will move forward, and as a matter of fact, I am currently crafting, drafting if you will, articles of impeachment,” he added.

The buzz over the possibility of impeachment was renewed after the Washington Post reported June 14 that Special Counsel Robert S. Mueller III had widened his investigation into President Trump for obstruction of justice. Till then, Mueller’s probe had only extended to the investigation of the Trump campaign for potential collusion with the Russian government during the 2016 presidential election

Writing in Newsweek, a former Clinton administration official said Trump’s impeachment was a matter of “when.” “The question is not whether there are grounds to impeach,” he said.

“The law is reasonably clear. If Trump removed Comey to avoid being investigated, that’s an obstruction of justice — an impeachable offense,” Robert Reich, who served as labor secretary under President Bill Clinton, wrote. Later he took to Twitter and said Trump would be brought down when Republicans “put loyalty to America ahead of loyalty to their party.”

Some Republicans have also joined the chorus calling for the president’s impeachment. Congressman Justin Amash (R-Michigan) was quoted by the The Hill, in a report published May 17, as saying if reports were true about Trump’s pressure on Comey, it would merit impeachment.

In an interview with CNN, Rep. Carlos Curbelo (R-Florida) compared Trump’s act to to the obstruction of justice cases that led to impeachment proceedings for former presidents Richard Nixon and Bill Clinton. “Obstruction of justice in the case of Nixon, in the case of Clinton in the late 90s, has been considered an impeachable offence,” Curbelo said. It is not just the obstruction of justice that can serve as a ground for Trump’s impeachment; many have called for his removal over his refusal to make his taxes public and his obnoxious tweets. Writing in the Daily Beast, Allan J Lichtman, a distinguished professor of history at American University and the author of “The Case for impeachment,” said Trump hiding his returns “may be a vain effort to conceal information that could contribute to his impeachment.”Following the uproar over his Tweet on Mika Brzezinski, Trump’s opponents cited an often-overlooked section of the US constitution could provide grounds for removing him from office, the Independent reported. According to the report, the fourth clause of the Constitution’s 25th Amendment allows a President who is unable to discharge the powers and duties of his office to be removed.