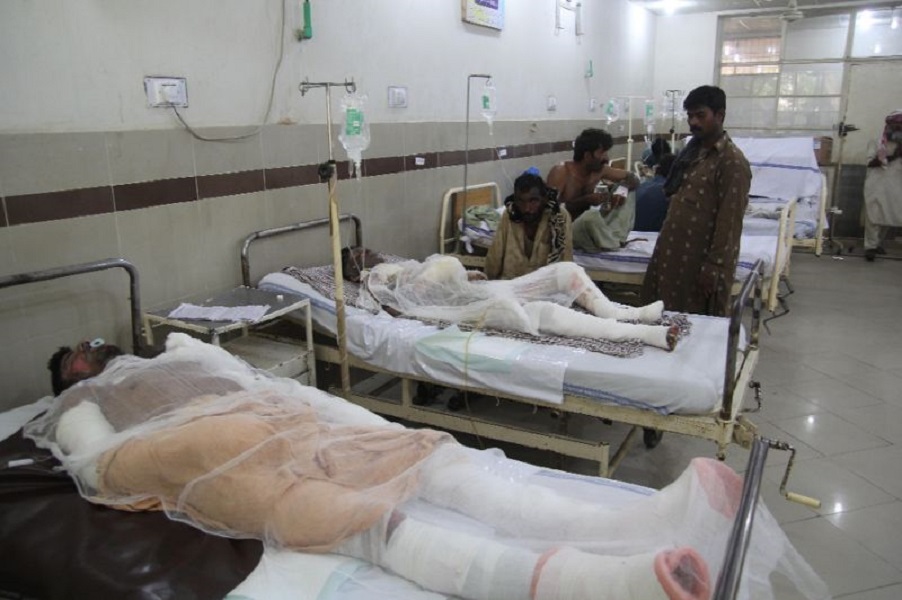 Bahawalpur (Pakistan) (AFP) – Pakistan began Eid in mourning Monday as the death toll in an oil tanker explosion rose to 153, with scores injured after they were caught in a fireball while scooping up spilled fuel.

Dozens of relatives were waiting outside hospitals in Bahawalpur, the nearest major city, to claim the bodies of their loved ones as Prime Minister Nawaz Sharif arrived early Monday to visit victims after cutting short a visit to London.

The explosion ignited early Sunday as crowds ignored warnings to stay away from the tanker which had overturned on a main highway from Karachi to Lahore, spilling some 40,000 litres of fuel.

Police have said details remain unconfirmed, but cited witnesses who said the tanker’s tyre had burst.

The accident quickly drew scores of people from a nearby village, many armed with whatever containers they could carry to scavenge the spilled fuel despite warnings from the driver, who survived the crash and was later taken into custody, and motorway police, to stay away.

Minutes later the tanker exploded, engulfing the crowd as well as dozens of other vehicles in a massive fireball that sent a plume of thick smoke into the sky.

“The death toll has climbed to 153, and many are in critical condition in various hospitals in Bahawalpur and Multan,” Javed Iqbal, chief of Victoria hospital told AFP.

State television aired images of Sharif arriving in Bahawalpur, and said he will visit victims at the hospital after being briefed on the incident.

The accident came after at least 69 people were killed in a series of militant attacks across Pakistan on Friday, compounding the country’s sense of grief as Ramadan, Islam’s holiest month, came to a close.

Pakistan has an appalling record of fatal traffic accidents due to poor roads, badly maintained vehicles and reckless driving.

The country has also long struggled to alleviate a chronic energy crisis, with regular blackouts crippling industry and exacerbating anger against the government.

Villagers near the town of Ahmedpur East, where the accident occurred, told AFP Sunday they were in shock after the accident.

“What is the use of this petrol, what will you do with it now?” asked resident Mohammad Shabbir, pointing to a bucket of scavenged fuel in his hand.