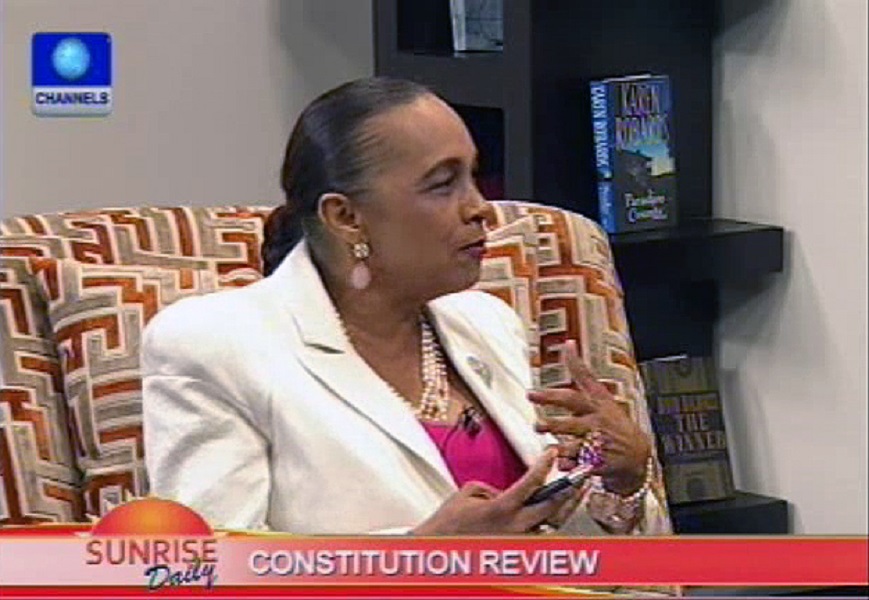 By UCHECHUKWU UGBOAJA
Amidst the growing calls for restructuring in the country today, Mrs. Ankko Briggs a resource control crusader and one of the notable human rights activists who had been at the fore front of the vanguard for true federalism and by extension restructuring seem to have thrown in the towel even as the call appears to be gaining momentum with the recent endorsement by a former military leader Gen. Ibrahim Babangida, as she has declared that the recent call for restructuring is already too late.
[poll id=”28″]
According to her long before the administration of Goodluck Jonathan or the National CONFAB held in 2014, she had been shouting for restructuring of the country but it just appeared that she was another lone voice in the wilderness called Nigeria, as nobody seemed to understand why restructuring was expedient at that moment to the country. She claimed that what Nigeria needs now is for the different regions to go their seperate ways as the federal sstem has practically failed and cannot be repaired through any form of restructuring that people are clamouring for now.
She stated that although the current structure clearly favors some certain sections of the country as numbers don’t lie, but no form of restructuring will correct these fundamental anomalies. “Going by the figures the North is getting over 60% of the total local government allocations and even when we come to the states as well they also receive far more than the Southern states. Again if you go to the national assembly they are far more in numbers especially in the house of Representatives and so by the time there is a motion or bill which they are not in support of ends up being frustrated or not being passed at all. A good example is the PIBill that had to spent over 10 years in the National Assembly, how can this continue?
According to the renowned advocate for resource control in the Niger-Delta, the time for restructuring Nigeria is long gone owing to the fact that it has become another political tool in the hands of the ruling elites whose plan is to increase revenue allocation to some parts of the country currently agitating but then retain the same form of governance which has bred institutional injustice in the country.
In her view calling for restructuring now is already too late as the union seems to have failed. “For me calling for restructuring now is too late we want to go our seperate ways because you see what they are calling restructuring is not what restructuring is. Restructuring to them is that the status quo should remain and peharps a little increase in revenue to agitating regions, but the real restructuring is when everybody keeps what you have, even if it is only water that you have and you can sell it, sell it. So anything apart from that is not restructuring.”
“What is federalism? This is where you have the states which are the federating units, so a federation means that every component is autonomous to itself within that nation, so how can the federal government be interested in building hospitals in Abia state or building a university in Rivers state? Nigeria is a good example of how impossible to run a government. How can one man alone who is of a different culture, language, religion run or oversee the rest of the people of over 400 ethnic groups as if he is overseeing his own personal property or estate, he cannot do it right because he doesn’t know my culture and so how can he make decisions that will be 100% appealing to me, because the things I would put into consideration if I am to make the same decisions will be totally different.”
“People even say that I don’t fight other people’s battle, but that is not true. I can fight the Igbo man’s battle because I understand his way of life and culture to a very large extent because my grandmother is Igbo and I can speak Igbo language well too, I can understand them, I can work with them, and if I am working with them and I make decisions for my people and Igbo people I won’t go wrong because I know what to do. Now reverse the case and ask me to make decisions for the Hausa-Fulani man or the Muslim man, I will make a terrible decision and this is because I don’t understand them. So this is what we are saying that someone who doesn’t understand a people cannot make any good decision for them, if this simple conditions are not met governance will fail and that is what has happened in the real sense, it has failed in Nigeria.
“The then military leadership under Gen. Abdusalami Abubakar had a rare opportunity of gathering Nigerians together to come up with a document meant to be the constitution but it was bungled, because what happened was that one man just sat down and made sure that the document was written to favour a particular section of the country and he called it the constitution of the Federal Republic of Nigeria. The Nigerian constitution is the only constitution in the world that tells a lie against itself and its people, when its first sentence says, “We the people”, that statement is a lie, there was never a gathering of any people or group of persons to discuss any constitution. Do you also know that the constitution was designed to work against people who are not Muslims as the word Islam, Muslim, sharia or mosque was mentioned over 200 times while the word christian or church was never mentioned in the constitution, and you say that same constitution is meant for all of us?