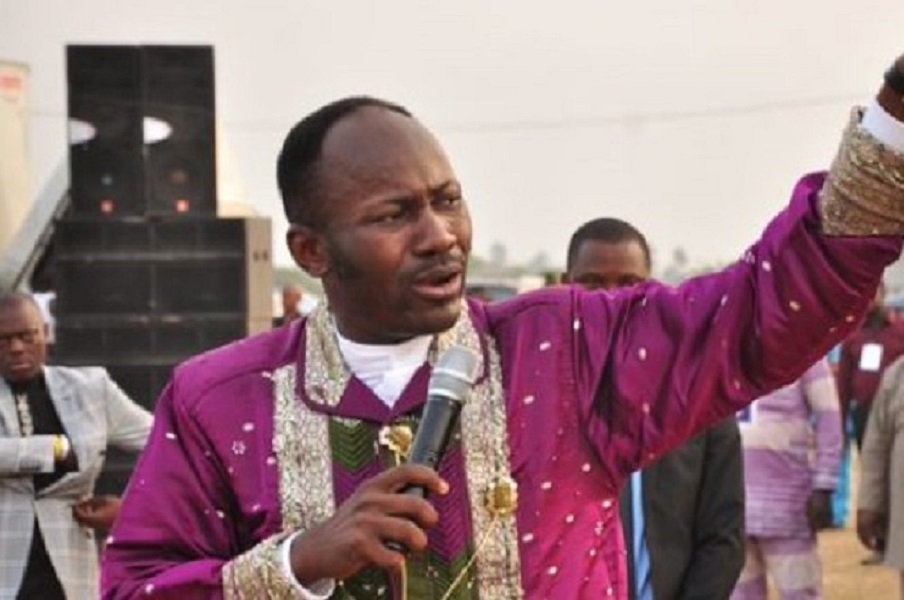 …asks Christians to rise against him

President of the Omega Fire Ministries, Apostle Johnson Suleman has expressed outrage at the removal of Christian Religious Knowledge (CRK) as a subject of study from the secondary school curriculum, describing it as a move to Islamise Nigeria.

The cleric in statement issued on Sunday by Phrank Shaibu, his Communications Manager, stated that President Muhammadu Buhari by this new policy has confirmed that he was out to Islamise the country soon after being sworn in on May 29, 2015.

According to him, the decision to scrap CRK as a subject in the curriculum but only to be studied  as a theme in civic education while leaving Islamic/Arabic studies as a subject to be studied in the secondary school curriculum is a deliberate plot by the Buhari administration, among other schemes to eliminate Christianity or at best reduce it to insignificance in Nigeria.

He said, “The new curriculum which is the brain-child of the Nigerian Educational Research Council and which is mischievously crafted to force Islamic Studies down the throat of non adherents is unjust, discriminatory, a subtle attempt at islamization, and therefore unacceptable.

“This is a well orchestrated and articulated plot. Let nobody try to fool Nigerians that it was a mistake or a coincidence. Why is it that CRK would be removed as a subject to be studied from the secondary school school curriculum while Islamic/Arabic studies is retained? This is a plan from hell and it shall not stand.”

Apostle Suleman also noted that the policy has been introduced at a time when Fulani herdsmen are on rampage in parts of the country and just before so called Arewa youths gave Igbo people living in the North to quit before October 1.

“Over 7000 people have been killed by these Fulani herdsmen with our security forces unable to stop the bloodshed. So called Arewa youths backed by some discredited elders have also issued a treasonable ultimatum to Igbo people without any reprisals from the Buhari government. So, is it a coincidence that Christian Religious Knowledge has been expunged from the school curriculum?”, he asked.

The revered cleric therefore called on the Federal Government to reverse the offensive policy and immediately restore Christian Religious Knowledge to the curriculum while commending the Christian Association of Nigeria (CAN) for being at the forefront of seeking to redress the anomaly.

“This evil policy must be reversed immediately. What is sauce for the goose is sauce for the gander. Christain Religious Knowledge (CRK) must be restored to the school curriculum. And I’m happy that the CAN has taken up the battle to ensure that those who seek to banish our faith do not succeed. We will continue to speak out until satan and his agents are put to shame”, he declared.

Similarly, he called on the government to stem the tide of consistent attacks by Fulani herdsmen as well as deal with those giving ultimatum to people from an ethnic group to vacate the north.

“For as long as Fulani herdsmen continue to kill, rape and burn people’s homes without restraint. In the event that the safety of an ethnic group cannot be guaranteed in any part of the country. Then Nigerians should know that it is not a coincidence. And my God shall not fold arms while the devil and his children seek to destroy the destiny of Nigeria”, he declared.

“We have the strength of character, the courage and the conviction to mount a sustained campaign in defence of justice, and in defence of our religion. We will not give up our religious practice because of someone else’. Nigeria belongs to us all and not for a few bigots who currently occupy positions of authority,” he said.

He said bigoty, hate and intolerance by anybody—be he or she a Muslim, Christian, Buddhist or Jew is indefensible and should be condemned.

“The earlier Buhari’s men come to terms with the fact that Nigeria is a secular state and cannot be Islamized or made a Christian State under any guise, the better for everyone. He warned that should anyone think that he can go ahead with the curriculum , then he or she should be ready for the mother of all battles, the consequences of which can only be imagined.”

Suleman said it is the collective duty of all Nigerians to oppose and despise all bigots in power, just as he called for a law to punish bigotry severely enough, so as not to make it fashionable or normal in the eyes of our children.

The church then demanded a return to the old curriculum which will give pupils of Christian faith all the moral teachings which Christian Religious Knowledge (CRK) offers.