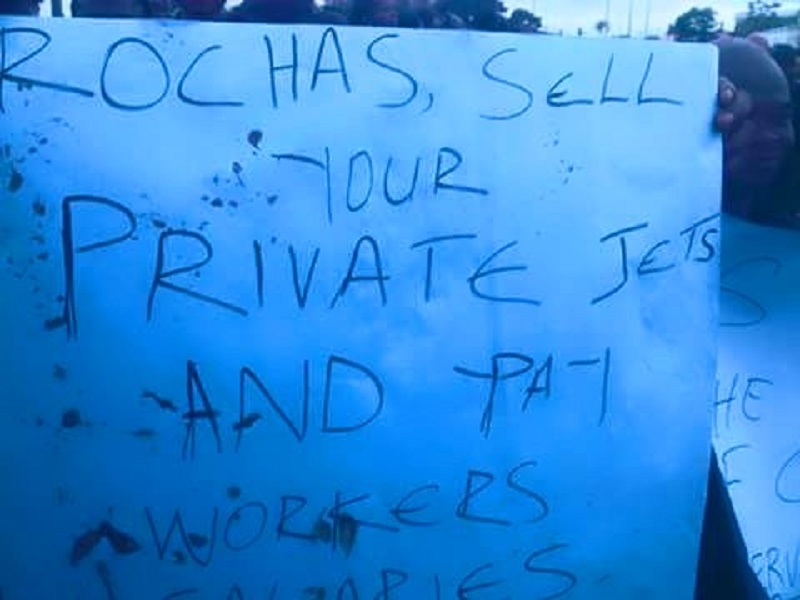 The Leading pro democracy civil society group in Imo state, Imo Bilie Initiative for Social Justice (IBIN) has taken a swipe on Governor Rochas Okorocha of Imo state over indemnity and forfeiture form being issued to pensioners in that state through the office of the state’s Accountant General.  In a letter written to the Governor dated 16th May 2016 through the Accountant General of the state signed by its National Coordinator, Activist Aku Obidinma and the acting National Publicity secretary Comrade Strategy V.I Onyeneho, the group said Your Excellency we write you with every sense of responsibility and worry over the continued suffering that pensioners, our elder statesmen have been subjected to by your administration.

The latest among these sufferings which has prompted our concern is the current form tagged “UNDERTAKING AND INDEMNITY FOR RECEIPT OF PENSIONS” that has been issued to pensioners to coerce them into forfeiting a whopping 50% of their monthly pension entitlement. The form also seeks to force them into dissociating themselves from the legal action their leadership has instituted against the government to seek redress over the unfair treatment that your government has meted out to them. The resort to the use of this type of hoodwink on our elder statesmen who used the prime of their lives to serve our dear state by a government that came in through the popular good will of the masses is unfortunate, condemnable and unacceptable.

Your Excellency, you must understand that pension is a right of the pensioners and not a privilege or favour as they worked for it. The argument of economic condition by Your government as the reason behind your inability to pay pensioners can no longer hold water because oil price has increased, leading to higher allocation from the federal government while the increment on taxes by the Your government has led to an all time higher internally generated revenue (IGR).

It cannot also hold water more by the fact that your government received a yet to be accounted for bailout fund of N26.8b, over N13b Paris club refund and other intervention funds from the Federal government in the last two years. With a prudent and constructive management of these funds, pensioners and indeed workers in the state ought to be fully paid as at when due.

We therefore call on you to immediately withdraw this ungodly form and pay the pensioners their full entitlements. As children and dependants of these pensioners we will not continue to fold our hands and watch their continued humiliation, suffering and even deaths as we will be forced to embark on a massive peaceful protest if your government fails to do so to ensure they are paid.

In a phone chat with a reporter, the Comrade Strategy confirmed that the group has commenced plans to mobilize Imo people for a massive peaceful protest that will compel the government to heed to their call. He condemned the failure of the NLC in the state from protecting the welfare of workers and pensioners in the state since you must end up as a pensioner after working.

He accused the NLC leadership of compromise and reminded them that what the pensioners are facing today is what will be waiting for them when they retire. He called on politicians in the state who are warming up for elective positions in the state to identify with the plight of the pensioners now and join this struggle as the people are watching.