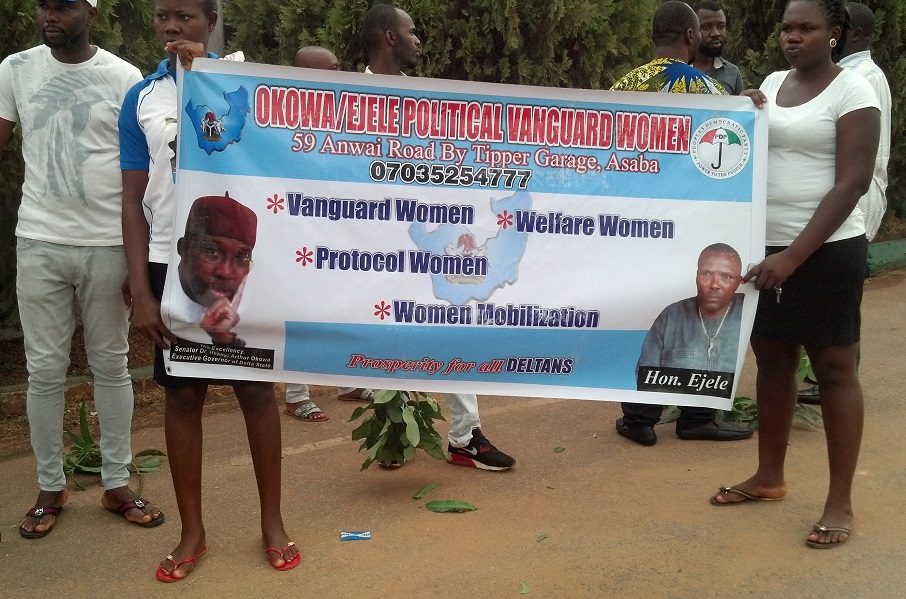 Youths suspected to be thugs of the Peoples Democratic Party (PDP) under the aegis of Delta Political Vanguard with 18 other affiliations have registered their grievances following what they described ‘neglect’ by the governor of the state, Senator (Dr) Ifeanyi Arthur Okowa and the member representing Warri South West in the Delta State House of Assembly (DTHA), Michael Diden, popularly addressed as Ejele.

They carried various placards with the inscription: “we are not empowered, hungry dey”, “Okowa where are we after all our labour”, “Ejele told us during your campaign than monkey work, monkey chop”.

Leader of the group, Mr Edemivwaiye Monday said they have been used and dumped by politicians in the state including Okowa and Diden while noting that the promise given to them during the election was not forthcoming.

He said they were in government house to inform the governor that they have been left behind, “we have been thrown away like a ladder after using us to climb. We are the first and we are supposed to be the end but they use and they dump us, we don’t even know where we are right now”.

He revealed that the group has written several letters to the governor, stating that those sent by the governor bought good response to them, “and we will not leave here unless those people come here to address us”, pointing out that they were assured that the governor will look into the matter but those promises have rather fell on deaf ears.

He said about two years into Okowa’s government nothing has happened, “there is only one thing you can do to the tortoise, when you put fire on its back, he will be forced to move, “when they were doing elections in the 25 local government councils they told us that Monkey work, Monkey chop. That is what Hon Michael Ejele who is the leader declared to us”.

He stressed further that the Monkey has done the work but it does not even know where the food is coming from. 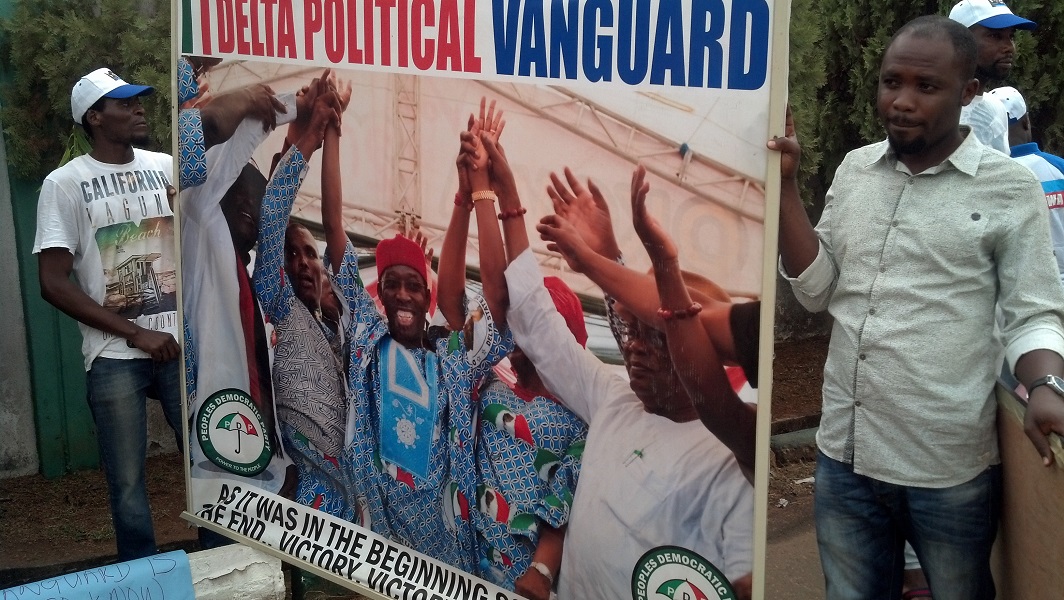 The group also disclosed that they were with the former governor of the state Chief James Onanefe Ibori at Oghara, to identify with him where he declared that Okowa should be allowed to come back in 2019, “he wrote us a letter to give our support to Okowa and now the man is here live, let us go and see him and the man congratulated us for our massive support for Okowa”.

“We will not leave even if it means killing us here, we will remain here till Okowa, Ejele or Agas come here to address us”. We are here today to see His Excellency to tell us where we belong”, he threatened.

Addressing them after much dialogue from police officers, Ukah told the group that their matter would be attended to by the Secretary to the State Government (SSG) Barr Ovie Festus Agas.

“Just give me the manes of your leaders, I will assure you that I will arrange a meeting with the SSG with youtomorrow”, he assured them.

Meanwhile, some of the protesters described Agas as a double side man who says a word and does another, “Agas is just a signboard. What does he do in the government? They asked.

It was observed that when the protesters stormed government house, men and officers of the Nigerian Police Force had clash with them but the group persisted to register their presence in government house.