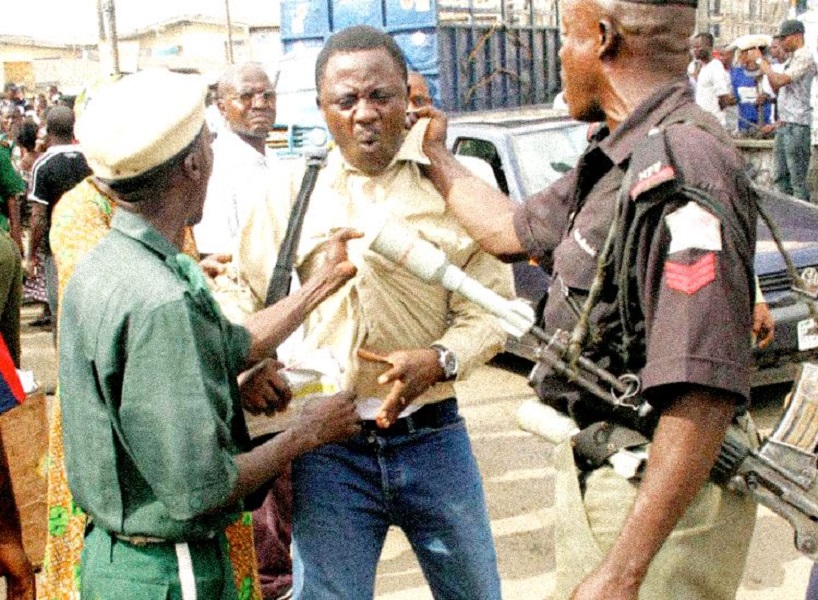 Almost daily the Nigerian security operatives assault civilians across the Federation in a show of shame most times. Nigerians are used to such scenes and always shrink in self-pity whenever it occurs.
That of Nigerian police and sometimes DSS and NSCDC may be understandable that they already carry bad name as a toga, but, Nigerian Army with all its discipline and better civil relations could not be understood.
Last time it was the assaulting of a cripple by the Army in Onitsha that awoke Nigerians, luckily the Nigerian Army reacted pro-people and rather received commendations instead of criticisms.
The Director, Army Public Relations, Brig.Gen. Sani Usman, spoke for the Chief of Army Staff, Lt. General Tukur Buratai.
From Africa to Europe, to North and South America to Asia to Antartica as well as Australia/Oceanic continents of the world security brutality is a fact but the Army is not known for pettiness, hence it is today worrisome.
But 3rd March, 2017 episode in Aba , Abia state needs not be swept under the carpet as it would be used to strengthen the relationship between the media and the Army.
On that day some journalists and vendors were assaulted for nothing.
The 8 man probe panel for extra-judicial killing of IPOB, MASSOB members, and others set by the Army chief means nothing to journalists, if media people assaulted in Aba are not apologized to by the army and perpetrators punished.
There is nothing like civil-military relations when journalists and vendors discharging their professional duties were hunted, disgraced and humiliated for no just cause.  The victims could have beaten them blue but for their guns and uniform bought with tax payers money.
Amnesty International, Intersociety, Civil Liberties and all other Human Rights and Civil Society groups have raised alarm jointly and differently about numerous abuses by the security organizations but most painful is that by the Army, an organization so revered.
I was shocked to watch some clips online and from some Human Rights groups on humiliation civilians suffer in the hands of the Nigerian Army across Nigeria especially where pupils were asked to roll over a canal with their school uniform to attend a Children’s day celebration. People beaten for asking a girl out simply because an army personnel has interest, and old men probably for one infraction or the other were asked to roll on muddy water and frog jump before his or her teenage children or family members no matter their class. The unnecessary hold up at army check points.
I have personally experienced Army brutality as they smashed my midget and camera for nothing even gave me some pummels and I know others who did as professional journalists. Let me not talk about extra-judicial executions, arbitrary arrests, detentions, torture and disappearance of IPOB members. If these people were Boko Haram members, robbers or vampires, no same person would raise alarm but Amnesty for sake of reports.

Buratai as a fine officer should order for a thorough and impartial investigation of the Aba insult to journalists and their assistants known as vendors. The slaps, the business scuttled and insults shouldn’t have been for Army and media age long relationship.
Buratai appears to be civil and on point hence over 80 Civil Society Organizations gave him Millennium hero award, but his statement that those agitating for an independent state to “forget it” as the army would not condone any act that could lead to the disintegration of the country was off mark. His utterances were not in tandem with the award. He disappointed my expectation with his speech.
He should have known MASSOB, IPOB or whatever they are called are unhappy with marginalization and nothing else. His headache should have been Boko Haram and other aggressors threatening the unity of the country with weapons of mass destruction not those protesting with ragtag regalia asking for equity and justice.

On that March 3, Soldiers of the Forward Operation Base, FOB, stationed at Ngwa road, Aba, Abia State assaulted the Aba sales representatives of Thisday, Punch and Authority Newspapers and arrested two newspaper vendors including a 64 year old woman, Jacima, over alleged sale of pro Biafra newspapers. Is that the duty of the Army or overzealousness?
Journalism is just reporting the events as they unfold or analysing the events pre and pro while vendors assist the newspaper owners after journalists must have gathered and assembled materials to form a newspaper to distribute them for public readership. What was the offence of journalists or the vendors that warranted soldiers in two hilux vans to storm the newspaper distribution centre at St. Michael’s road, Aba, in a commando-style and ordered vendors including those who came to buy newspapers and magazines to sit on the floor and identify themselves.

Thisday sales rep, Mr. Simeon Obi was bundled into a Hilux while they assaulted the sales rep of the Authority newspapers, Mrs. Chinyere Ibe who was giving newspapers to vendors when the soldiers arrived and asked her to identify herself.
An infuriated soldier had said:  “You say you be authority, who gave you that authority, who made you the authority of this town? If I hear you be authority again, I will deal with you.” And he dealt with her, what impudence, because he was on uniform and with a gun enjoying our taxes?
For The Punch, Thisday and Authority sales reps including the two vendors who were later taken to the army base at Ngwa High school, it was a tortuous and most embarrassing moments of their adult lives.
Commanding Officer, 144 Battalion, Asa, Abia State, Lt. Col. Ksssim Umar Sidi, although denied that the suspects were assaulted but admitted handing them over to the Department of State Services, DSS. But newspaper sales reps and vendors were indeed assaulted.

What impudence? If the Army does something and journalists refuse to report their side of the tale, how would they feel? Why then do they invite journalists to report their operations and community service?
The same way journalists are invited by MASSOB, IPOB even native doctors and what have you to report them. So why harassing them for writing? Harmless writing for that, why not invite journalists and parley over launch appealing and explaining to them on need for self-censor on such stories you detest for national interest?
Should journalists, and vendors stop their responsibilities to the society because of the Nigerian Army intimidation, harassment and bullying?  Or should the Army Chief agree that journalists and vendors were unnecessarily intimidated and deserve some apology? They are not the owners of the newspapers neither owners of the printing press. There are addresses at their folio. I insist that Lt. General Tukur Buratai must hear this and his reactions and actions would determine the next encounter civilians would have with the Army, journalists, vendors or not, for the sake  of much taunted Army , Civil relations.

Odogwu Emeka Odogwu is a Publisher, Editor and a Journalist based in South-East. 08060750240 , E-mail odogwuchampionawka@yahoo.co.uk