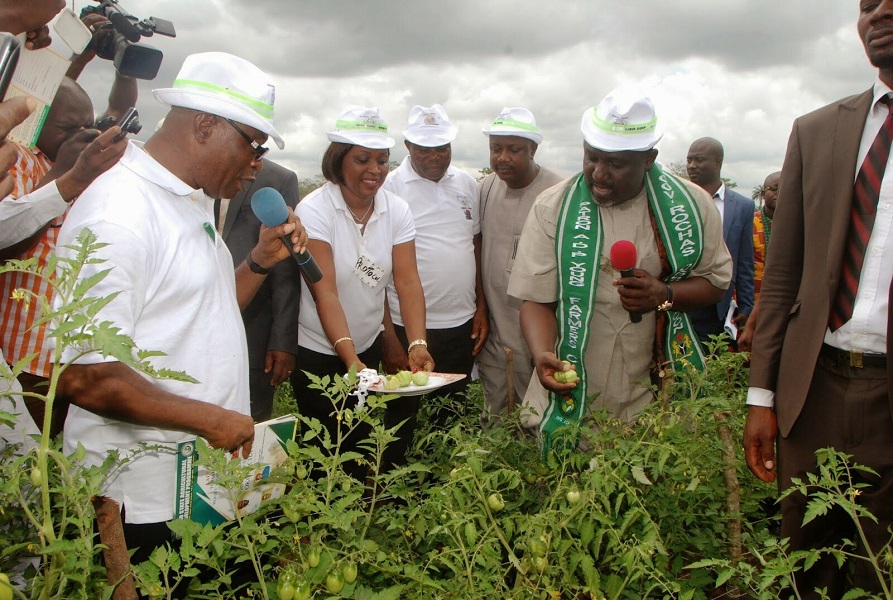 Farmers for Imo Anchor Borrower’s Programme are likely heading for colossal failure if Governor Rochas Okorocha fails to urgently intervene in the release of N100 million he provided to facilitate the programme.

It was gathered that Okorocha had released N100 million to assist over 1,000  farmers for dry season rice farming commence planting pending the release of federal government loan by the Central Bank of Nigeria (CBN).

The governor’s intervention it was learnt was to enable the farmers already caught in the web of early rains to scale through disaster of water damaging their crops hence the commencement of rains in the area.

But findings by our reporter revealed that the money released about one month now by Okorocha is still in the custody of Mr Udo Agoha, the state commissioner for Agriculture Natural Resources and Environment.

Some of them from Oguta LGA of the state who spoke on condition of anonymity in Owerri said they are beginning to develop cold feet over the programme.

“When we started training, they said that we will receive N250, 000 and agricultural inputs to enable them us embark on this dry season rice farming before the rains starts in March or April.

“As we speak, they have given us the inputs and we have nursed these rice waiting to plant, yet the money which they said we will be given are not there for now.

“Before we began the training in November last year, the impression was that we will not spend a dime, but towards the end of our training they told us to deposit N15, 000 before the N250, 000 will be paid into the account we opened with the Bank of Agriculture (BOA).

“Most of us had even borrowed money to clear the bush, pay for training and transport ourselves in and out of Owerri for the training and we no longer have money ’’, the source said.

The source explained that when the issue of depositing N15, 000 was presented and majority of the farmers wanted to pull out of the programme, the organizers of the programme told us that Gov. Okorocha had released N100 million for us.

“Since they gave us this information and told us that they will credit our accounts immediately to enable CBN and BOA see the equity deposit that will facilitate the release of the 250, 000 loans to us, we had yet to see any money.

“What is very worrisome to us now is that we are at the verge of failure  in this dry season rice farming in Imo State because a lot of things are counting against us; the rains are here, there is no money to prosecute the project and yet we are faced with the threat of imprisonment if the programme fails’’, he said.

When contacted, Mr Udo Agoha, the state Commissioner for Agriculture, Natural Resources and Environment confirmed that the N100 million was released for the dry season rice farming by Okorocha, saying “the N100 million is still intact with him.’’

“I can confirm to you that the N100 million released for the dry season rice farming in Imo State by His Excellency is still intact with me, all we are doing is to make sure that the money do not enter into wrong hands.

“The governor gave us this money because if the farmers have inputs and no money it will adversely affect the dry season rice farming which we are still embarking on for the first time.

“In the next few days pending the logistic challenges and the checks we are putting in place, we will release the money to genuine farmers because we are bent on launching Imo Rice by June this year’’, Agoha said.

It will be recalled that the officials of BOA and CBN had earlier conducted strict checks on the prospective farmers before inputs were distributed to the beneficiaries.

The prospective farmers who are appealing to the state ministry of agriculture to make public the modalities for this second round of check said this would enable them decide whether to pull out or continue with the programme.