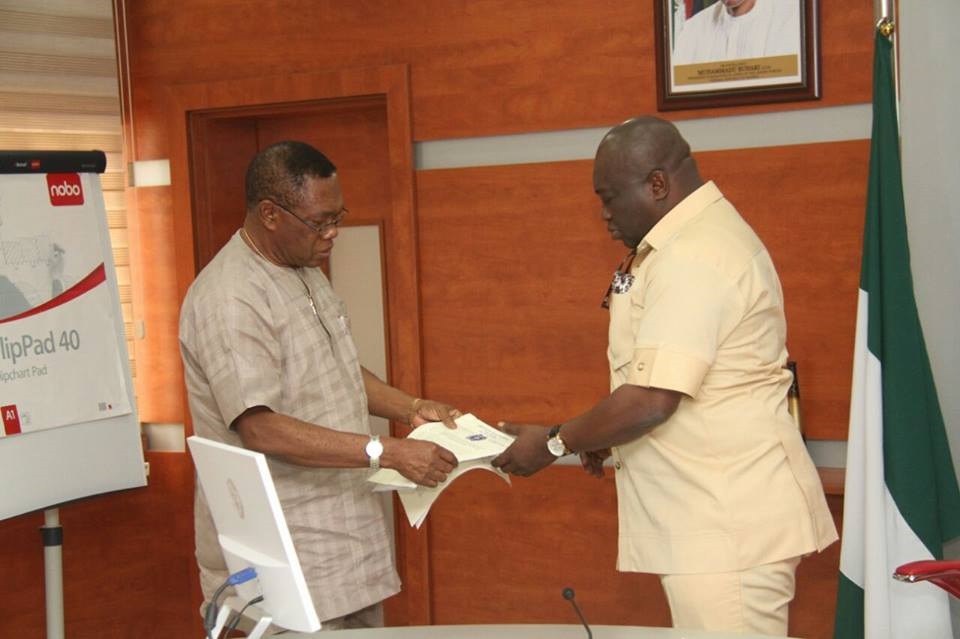 Immediate past chairman of the governing council of Abia State Polytechnic, Aba, Dr. Chuku Wachuku, has accused the staff unions in the institution of working for the sack of Governor Okezie Ikpeazu from office.

Wachuku who stated this in a telephone interview with our correspondent alleged that the staff unions led by the Chairman of the Academic Union of Polytechnic (ASUP) in the institution, has been circulating text messages among their members boasting that the governor’s case at the Supreme Court is almost over and will not be in Ikpeazu’s favour.

He said, “From the way the Staff Unions coordinated by ASUP chairman, Precious Nwakodo, have been going about circulating text messages that the governor’s case at the Supreme court is almost over and that it wont be in his favour. They are instigating crisis in the institution, their action smacks of a hidden agenda; we are beginning to wonder if it is only payment of salaries that is causing all these animosity? We begin to wonder their motives; is it against this governor or governing council?

“Are there primordial sentiments behind it? How can a responsible union be circulating text messages that Ikpeazu’s case at the Supreme Court is almost over and that he won’t survive it? It is targeted at influencing the case against the governor. How can a union official be spreading sentiments that the chairman of the governing council, the Registrar and the Student Union President are all from Ngwa. Is this unionism? People have started asking questions because what is happening is no longer unionism? I know that Gov. Okezie Ikpeazu has been working very hard to settle the arrears of salaries owed workers in the state. But why are Precious Nwakodo and his cohorts vehemently opposing this government and the former council the way they have been doing? When you overdo things, it means you have a hidden plan to achieve an end. What wrong has the governor done them? He paid off a N2 billion loan for the Polytechnic.

“Instead of sitting down with the council and management to negotiate what is best for their members, they have resorted to playing politics and confrontation. They have deliberately resorted to causing revenue losses to the Polytechnic. This is the peak admission period, what manner of staff Union will insist that school won’t be reopened to admit fresh students even when they know that it is one of the major revenue earners of the Polytechnic? They forgot that if school fees are not paid, there will be more salary arrears owed workers. They did same thing last session at the peak of the admission period. The student population of this institution fell from 35,000 to 15,000, yet the unions are not bothered. It is no longer unionism when you fight and slap people, shut the gates and accuse people on sentiments.

“The question is, is Chuku Wachuku qualified to be chairman of the governing council? Yes I’m eminently qualified. I have ran systems in this country, I have been Director General of a federal agency, I have been acting pro chancellor. In fact, council chairman is the least position I have occupied. Is the Rector and Registrar qualified, yes they all qualified.

“So, what is the basis for these primordial sentiments by bandied by some members of the staff unions? This call to question the calibre of staff teaching our children. The same people who said they are not being paid are feeding fat from the rot in the polytechnic. We were committed to setting best practices in the polytechnic. There have been many incidents of hostility in the institution. What we asked for is responsible unionism based on dialogue and respect for council and management. Our target was that once we institute these best practices, the system will run smoothly no matter who is at the head. We needed to clean up the rot which the unions were there while it went on but said nothing. I was not part of the rot neither was Governor  Ikpeazu, the Rector or Registrar.

He dismissed reports alleging that he used N200 million to furnish his office as chairman of the governing council, describing such as unfounded.

“I laughed it off when they said I used N200 million to furnish my office. The correct position was that the boardroom, the offices of the Rector, Registrar, and the entire floor were renovated and furnished and it cost less than N18 million contrary to the former practice of bloated contracts which Precious Nwakodo and the staff unions benefitted from. I think they need to commend the council for our prudence.

“I didn’t take sitting allowance as council chairman because it became an issue in the Polytechnic. I refused all my entitlements. I used my cars, security and domestic staff. It is only in Abia Polytechnic that the issue of entitlements for the council has became a matter of social media. It is on record, go to the bursary, you will discover that even some of my members refused sitting allowance.

“The council was composed of ex bankers and other eminent persons who were desirous of adding value to the Polytechnic. Some staff of the polytechnic especially the ASUP chairman with his agents outside the Polytechnic were benefitting from the system and did not want us to cleanse the rot they caused the institution.”