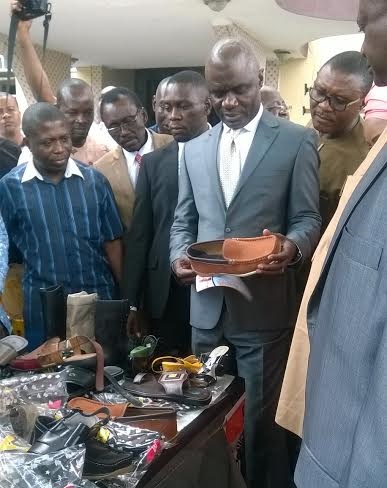 Few days after it banned the use of agents in revenue collection in the state, Abia state government has said it is committed to eliminating obstacles militating against the growth of Small and Medium Enterprises, SMEs,in the state through the provision of enabling business environment to encourage investors.

Speaking at an SME investment and exhibition forum 2016, in Aba, Deputy Governor of the state, Sir Ude Oko Chukwu, who represented Gov. Okezie Ikpeazu, maintained that Abia remains one of the most investor friendly states in the country, and added that the state operates an SME Development Scheme which renders assistance to entrepreneurs and urged them to make use of the various categories of funding to grow their businesses.

The deputy governor who had earlier inspected a business exhibition of made in Aba good at the event, disclosed that the state government has harmonized the taxes and levies which businessmen are expected to pay, adding a monitoring committee had been set up to monitor touts who engage in illegal revenue collection in the state.

“Abia state remains one of the most investor friendly states in Nigeria. We have secured a one billion Naira SME fund to assist entrepreneurs in the state. Our support to entrepreneurs is total. We are determined to eliminate multiple taxation and other challenges militating against the growth of SMEs in the state. We assure investors of conducive business environment. Our approach is that all demand notices will be issued at once. What you will get in Abia is two demand notices, once you pay, nobody will disturb you again. We have inaugurated a monitoring team who moves around to the state to check those collecting illegal levies. We urge entrepreneurs in the state to itemize the multiple levies which they are being charged and forward them to the government for necessary action.”

While responding to the complaints of the business community of the problems of bad roads and power supply,   the deputy governor recalled that the state government had embarked on rehabilitation of roads to boost trade and commerce, and assured that the problem of power supply would soon be a thing of the past as the disagreement between the Enugu Electricity Distribution Company and the Geometric Power Limited had been resolved.