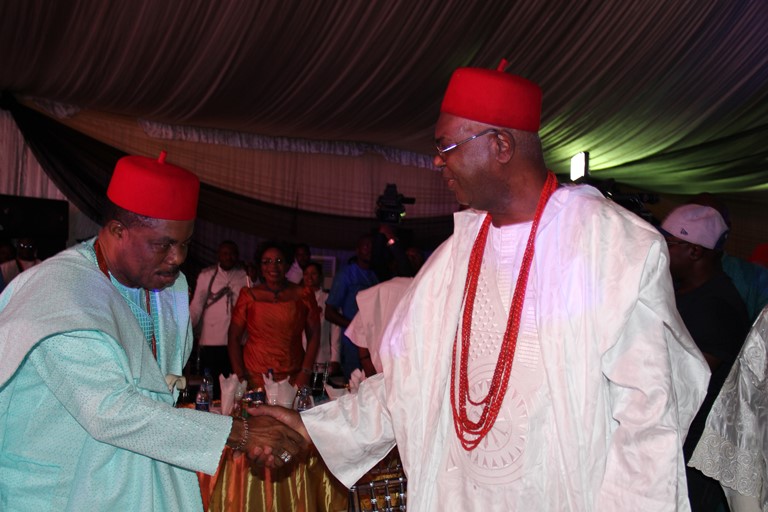 It is often ill advised to join issues with persons known for gutter talk and reasoning derived out of illogical deductions. But for the avoidance of collateral damage and for clarity, it is necessary the air be cleared on the many misinformation deliberately dished out to the reading and innocent public as facts.

A particular case that have grown from bad to notorious is the growing vilification of the Anambra State Governor in the person of Chief Willie Obiano – fueled by the fear of an upcoming gubernatorial election in 2017/18. The fear that he be returned for a second tenure has led some within the Peoples Democratic Party [PDP] and the All Progressive Congress [APC] down the path of hatred and disregard to decorum and facts.

Today saw the latest write up by their ‘attack dog’ titled “The smoked minds of Political CHIMPS in ANAMBRA by Mazi Odera 07/11/16″ .

The content of the write up – which was drafted in a different form of the English Language – accused the Governor of Anambra of a mirage of disjointed ‘crimes’ ranging from chasing the former Governor of Anambra out of the All Progressive Grand Alliance [APGA], to collecting 1.45billion monthly as security votes, to hating the people of Nnewi and Ojukwu, to structural failure of the newly erected flyers in Awka, and others.

The author of the same write up then turned his in-coherent attack to the former Chairman of the APGA, Chief Victor Umeh.

What appears saddening and a tad disturbing is that the author’s incoherent attack came on a day the entire citizens and indigenes of the State were engaged in celebration of the historic victory of the Anambra Warriors [Ifeanyi Uba FC] in the flied of soccer against the Nasarawa United FC 0 for the federation Cup. Anambra State had never won such a fete in her history. With the efforts of Ifeanyi Uba and the State Government, the victory was made possible. So while the entire state were in celebratory mood, the author and his pay masters found himself grieving.

The details to his accusation lacks merit. But Peter Obi was not sacked by the APGA. No official records show he was asked to leave. Peter Obi was already in bed with the PDP top chieftains before his official opportunistic decamp to the PDP. Peter Obi had already made up his mind to join the then President Jonathan’s campaign train – to reap from the expected victory at the presidential polls. But it back fired.

On Ibeto cement, the author either exposes his lack of knowledge or is hoping his readers are not knowledgeable. The state government issues a contract order. An contractors are given specifications on the project as contained in the contract. The State government is not legally able to point or force a contractor on with brand name to use to carry out the given contract. Sad how the author twists lies conceived in his realm of being to fit into what he wants to call a fact.

On Ikemba, the author is being childish and desperate. He is grasping at straws. Chief Willie Obiano owes his loyalty to the legacy left behind by Ojukwu and Azikiwe.

The author claims the Governor is headed out of the APGA to the APC – but provides no evidence or any indicators that points towards the action.

It has become unfortunate the manner the politics of democracy has transformed itself in Anambra to gutter engagement. It has equally become sad to watch as it continues unabated – where half baked numskulls take to the pen to spew half truths and wicked misinformation only to vilify the seating Governor of a State.

May God Help Anambra State and Her Elected Officials

Here is the diatribe pasted below

Sure my Governor whose campaign messages include..

Vote for me for I FOUGHT Peter Obi and drove him out of APGA.

Vote for me for I chased every power broker away from APGA.

Vote for me for I only take 1.45 billion of your money per month.

OK, Vote for me because I hated INNOSON and wanted to ruin him same way I ruined EEKESON TRANSPORT, IBETO CEMENT.. let me explain, the monument of cement we erected in OKA at the cost of 15 billion naira were all done by using DANGOTE CEMENT, despite the fact that IBETO CEMENT is 600 times better and stronger than every other cement but our Governor for his hatred for Ndi NNEWI as a result of transferred hatred he had for Ikemba Ojukwu, remember that he never identified with Ikemba, never visited him while alive and even in death he did not pay respect, but moving on.. My Governor shifted his patronage to DANGOTE.
AS WE CAN SEE THE BRIDGE HAS CRACKED, SINKING AND IN LESS THAN 6 MONTHS WILL BE MORE DANGEROUS THAN EBOLA VIRUS.

To make sure that NNEWI punishment is massive, he plotted to sale NNEWI Mall to CARDINAL DEVELOPERS same front he used in buying Onitsha Mall and till now they have not even added on block to the site and the Governor is yet to abolish the trade, though we cannot call it trade because they paid not even a dime for it.

Back to the campaign, he will tell communities how he gave them 20 million Naira project, which he has advised that the total money that will be released should be 13 million others will be paid into his re-election purse.

Now the plot has gotten to dohanu (Please separate us fight)  ,acting in concert or alone, the TOMB RAIDER with 3ft RED CAP has started acting his plays, first he set the stage and removed the APGA NATIONAL CHAIRMAN and put in place a candidate that will hand him the party Gubernatorial ticket for 2017 so that he can sale it to Akpokue at a cheap rate off 3 billion naira.
But my worries including why drag Nobert Obi as collateral?

If we put aside the burial of APGA which is imminent and the defection of Obiano into APC, I want to know what they have against this family in Ekwulummili that lost 6 children in one night but instead for the Governor to rush down there and join the bereaved he simply rush down to PH to dance iche na mmadu bu ewu and that one night stand cost us 250 million naira ONLY.

OK, we also know that VICTOR UMEH since OKWUTE retired him from SENATORIAL quest and force him to start attending Burials, naming ceremony, iwa ji but this death of 6 children none of them attended, including Umeh whose love for burials are un rivaled.

Why didn’t he pay homage as usual?
Is there another thing we are missing?
Is this death of 6 accident or something else is beyond the surface?

As I move on to hustle for the day, the question remains GINI KA ANYI JI ISI KOTE?