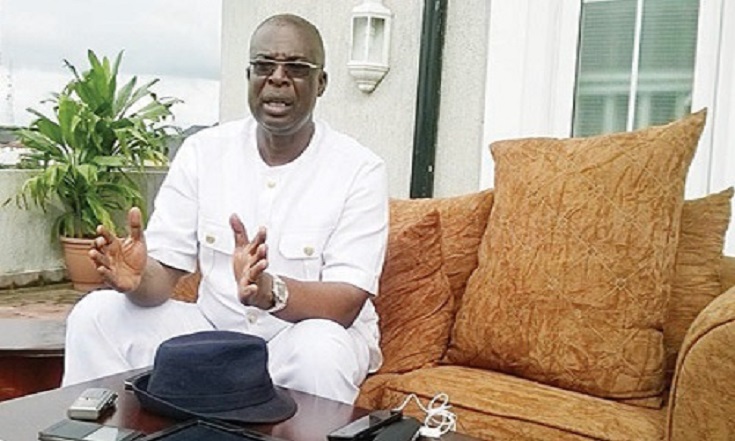 Bayelsa state chapter of the All Progreasives Congress (APC) has suspended its governorship flag bearer in the last election, Chief Timipre Sylva and four other party leaders over alleged anti-party activities and corruption.

In a statement signed by the state chairman and the Secretary, Chief Timipia Tiwei Orunimighe and Comrade Daniel Marlin, respectively, described as “unbecoming” of the former governor Sylva, alleging further that “last week Tuesday precisely, paid a clandestine visit to one of the south south Governors of the pdp, this is just one of the series of correspondences between them” which is in breach of the party’s constitution.

The statement reads: “After due consultations with relevant stake holders and elders in the state, the Bayelsa state executive committee at an emergency meeting today 1st of April, 2016 by 6pm  took the painful but necessary decision to suspend our Guber flag bearer  in the 2015 elections Chief Timipre Sylva pending the investigation of the following cases brought against him:

“1. Anti-party activities. We have it on good record Timipre Sylva, last week Tuesday precisely, paid a clandestine visit to one of the south south Governors of the pdp, this is just one of the series of correspondences between them and we find it grossly unbecoming. This is in direct breach of Article 21, under ‘Offences’ in the party constitution which states in section 2, ‘Anti-Party activities or any conduct, which is likely to embarrass or have adverse effect on the party or bring the party into hatred, contempt, ridicule or disrepute’ Is punishable.

“2. Attempts to Form a parallel executive. This is in complete defiance of Article 21, under offences which states, ‘Factionalization or creating parallel party organs at any level’ is punishable by the extremists of means.

“3. His antics betrays the present posture of Buhari’s regime which has cardinal virtues of honesty, sincerity and transparency.

“4. Corruption, Indiscipline and Trading of political offices. We find it deeply embarrassing his relentless efforts to commercialize political offices. Worse still, is that, members of the opposition who vehemently stood against the change ideal and still do not believe in our party’s course are with him on the bargaining table. This is not in fidelity with the party’s constitution which states in Article 21, section 1, subsection 3 that ‘…Engaging in dishonest practices…’ are punishable by full stretch.

“5. For conniving with Timipre Sylva in an attempt to destabilize the party and publishing an illegal statement on behalf of the party, the following officers are also placed on indefinite suspension following a motion moved by the Senatorial Vice chairman East, Elder Alagoa and seconded by comrade Marlin Daniel. They are: 1. Senatorial vice chairman central, Mr. Joseph Fafi, 2. Mr. Edison Sogwe, 3.. Mr. Panebi Fortune, Pub. Sec. and 4 Mr.  Tonye Okio, the organizing secretary.

“We have tried on countless occasions to advise him on the dangers of his untoward behaviors, but each time we are faced with threats and insults. The party will not tolerate acts of Indiscipline from anyone no matter how highly placed the individual.

“Party members and the general public should disregard a letter circulating in the social media purporting to suspend key leaders of the party. It’s a classic case of an “APRIL FOOLS DAY” joke. Only the National Executive committee can suspend the chairman of the party on the recommendation of the Zonal (South South) executive committee.. article 21 d.

“Party members should also go about their lawful party activities as the state chairman has made adequate provision with the law enforcement agencies in the state to secure the party secretariat.
To save the image of the party and restore confidence among members, the state executive committee hereby suspends Chief Timipre Sylva and his cronies pending the conclusion of investigation.  The committee will be inaugurated next week to look into the various allegations.” 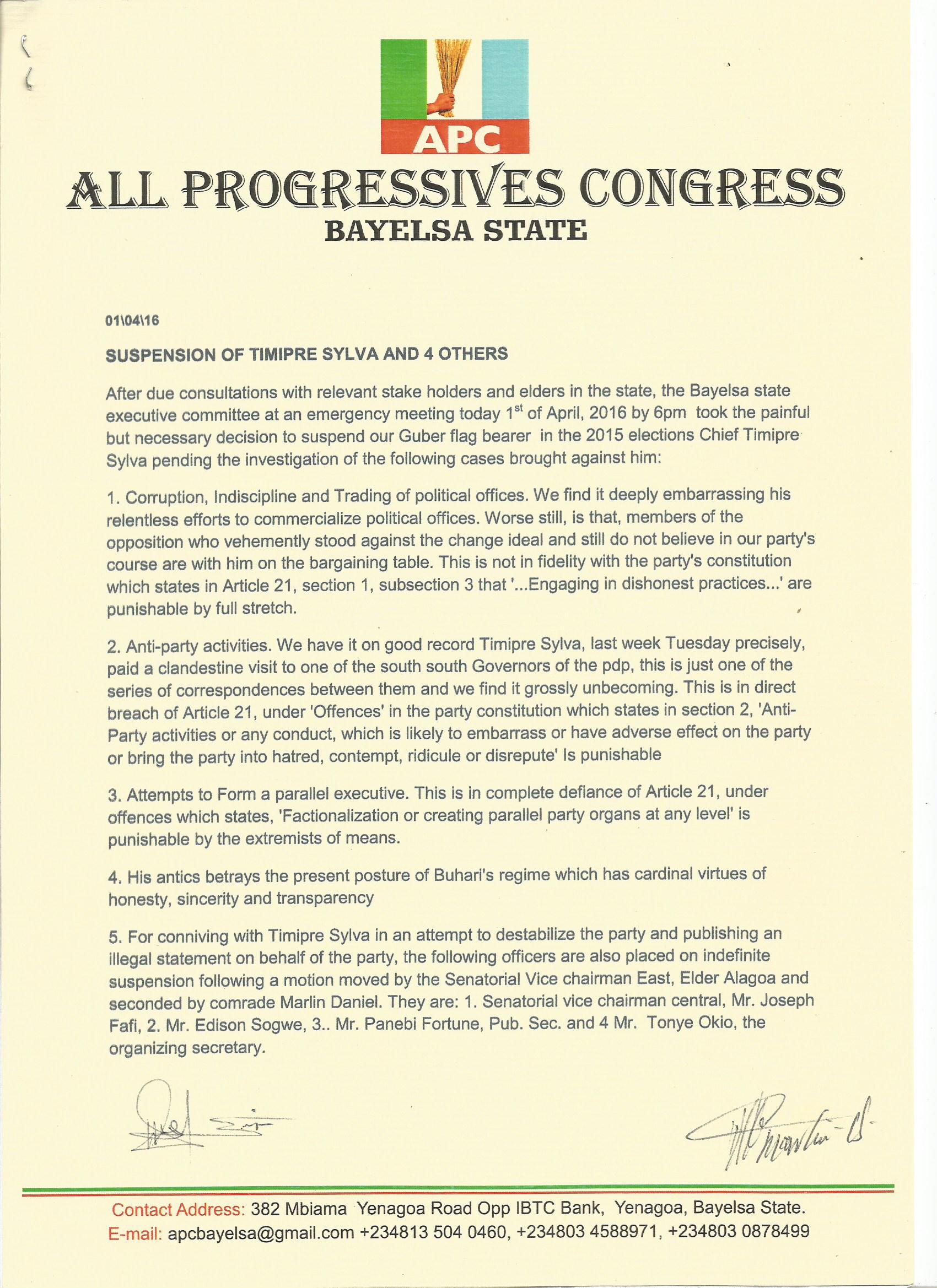 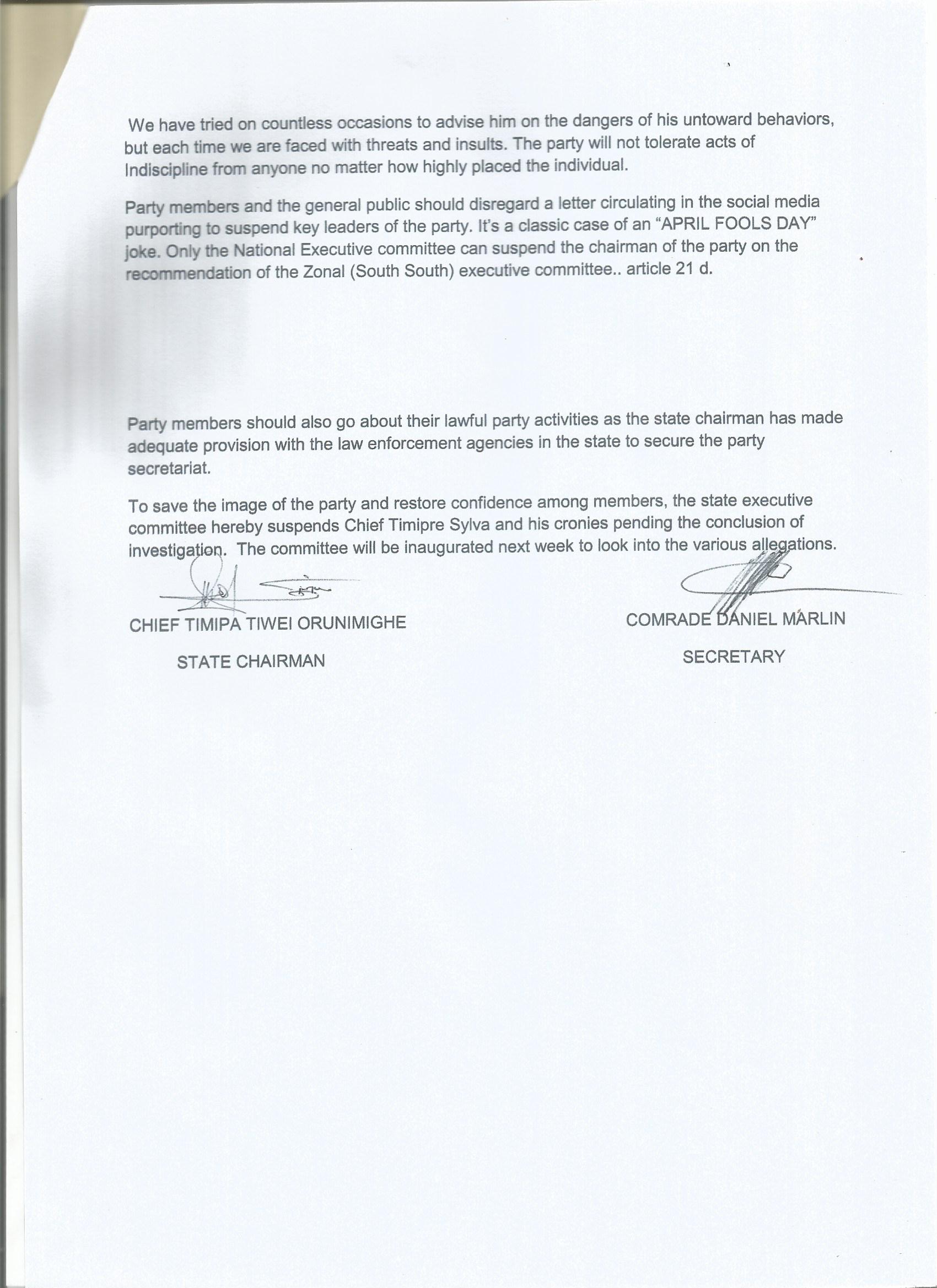