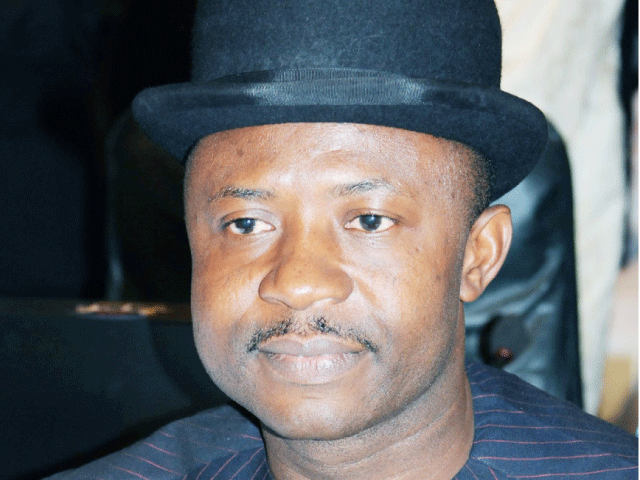 For 15 years Nigerian athletes were intimidated, abandoned, caged, gagged, molested, maimed, mentally tortured and enslaved by the so-called sports federations and the National Sports Commission (NSC). To wit, this writer encourage them to make their demands to correct all these sufferings known to all the political parties vying for offices in the February 2015 election, failure of which they should just continue to suffer in silence with fake smiles.

Before anyone jumps to wrong conclusion, this is not to advocate for any political party in particular but Nigerians must ask themselves whether any athlete issue was mentioned even by ‘waka pass’ in the past including 2011 election? If the answer is no, who do Nigerians blame when all political parties were not aware of these serious (athletes) concerns? This writer says, the
athletes.

The importance of this blame on the athletes can clearly be founded upon obscurity of the existence of an athlete’s need or welfare, part of which can be blamed on the media but on a wider scale its very simplistic to blame media on this because athletes themselves got to be assertive in their demands.

At the stage of Nigeria’s democracy, Nigerians ought to zero-in on weakened Federal Government due to pending elections but unfortunately the citizens aren’t really aware of the powers they currently hold. As a comparison, American Presidents on their second term in office are considered lame duck for not being able to maneuver the legislators rather it’s the legislator with the upper-hand but most often times these legislators used such power wisely to avoid voters backlash in the next election.

This should be a lesson to be learned by Nigerians on use of their voting power. The hope is that Nigeria’s unique character, where majority of voters are simply not up to date with current affairs on even those issues that affects them directly will change and that will bring the readers to the gist of this article, the athletes that are old enough to vote, are they informed?

Are these athletes aware of their voting powers? If so, are they united or splintered into various political affiliations? If so, what political parties? The fact is that this writer never heard of any athletes’ movement or union in Nigeria to even unite in making demands for their welfare and this must change with this article.

The country participated in several senior and junior competitions in few sports that the current political regime funded, but except for the juniors, the country was better of absent than wasting her resources on Federal Government entourage to all international sports engagements where spending on competing athletes were outnumbered 10:1 by those government clappers to the tune of over many billions of Naira.

The highlights included the participation in the FIFA World Cup of football where pundits derided, cursed, trashed and abandoned supports of the country’s team for reasons only known to them. But of course the level of spending the country threw at football with its own budget line item within the Federal Government of Nigeria’s annual budget definitely invited the cynicism and mockery of the sports’ leaders.

In fact, majority of these so-called sports leaders are not and cannot be employed elsewhere or even qualified to do so as such they compounded the hierarchical experience / qualification deficit faced by football and other sports in Nigeria. Some of these sports federations enshrined within their constitutional document amendments to make basic elementary education as academic qualification to be a board member and the acceptance of such amendment suggests that the entire constitutional papers must be revisited because its’ worth absolutely NOTHING and those that allowed it to stand, must be publicly ridiculed and ‘academically flogged’.

Commonwealth Games provided the greatest barrage of insults to Nigeria starting from Bolaji Abdullahi’s incited emphasis on using mercenaries from USA to represent Nigeria where the country’s own citizens were abandoned in rented houses in towns across USA to fend for themselves while others were left in mosquito-infested slave camp in Abuja. Ideally, Nigerians would have expected quality mercenaries to win medals if that’s the goal of the Federal Government but as it turns out Solomon Ogba, the Athletics Federation of Nigeria (AFN) so-called boss even shortchanged the Federal Government by enlisting druggists, over-aged and America’s non-qualifiers (USA trials) to represent the country.

To perpetrate this fraud on the British Commonwealth movement, Nigerian middle names were given to those ‘fool crackers’ along with Nigerian passports without even understanding the national security and constitutional breach implications for doing so. Yes, the ‘tokunbo’ people won no medal for the country at the Commonwealth Games, in fact Blessing Okagbare, the Nigeria’s girl delivered the country’s medals but rather than an atonement from Solomon Ogba he went on rampage insulting members of his federation and the general public along with local athletes by contributing charade of accusations and unintelligent reasons of his actions.

In substance minus the cancerous tirade, Solomon Ogba states that, he is creating a legacy for others to follow because only he will be asked to account for AFN actions. Omatseye Nesiama, the Navy Commodore and noted AFN technical director remained mute on Mr. Ogba but later noted that the AFN did what they considered the best option. Tafida Gadzama, a London outskirt Councilor and AFN Board member forcefully disagreed with AFN direction. On second thought, Commodore Nesiama could face military charge for heading a non-military organisation as a director unless, the country is in military dictatorship.

The country’s other sports did not provide any scintillating drama to report because quite simply, NSC abandoned them and the media found no sellable issues or scandals in them and of course, if funding for other sports are stopped the country may not hear about news concerning them rather only on the betting line.

For one thing, Mr. Danagogo is serious about his role based on his actions since appointed but unfortunately his technical skill as an administrator or leader is severely handicapped either due to lacked professional skills training or simply he is using the x-factor (unknown and unique problem solving formula). It is also clear, that no one Minister ever challenged the football federation on disbursements to the players despite media hounding but Mr. Danagogo did and this writer was impressed.

Mr. Danagogo made sure that monies meant for players and coaches were given directly to the individuals and that’s one of those unique qualities (x-factor) he brought to NSC. The question is, if he can take this strong actions against people that thinks football is their birthright then why he did nothing to the AFN before, during and after Commonwealth games?

This is Mr. Danagogo Achilles hill when one considers that the parties in charge of football are from the country’s North and those in AFN are predominantly South. In fact, NFF recent imbroglio, where, Barrister Igbokwe exchanged text messages with Mr. Danagogo (it appears he categorises some Nigerians as mentally unsound to disagree with him) is an example. Those text messages are suggestive of favour of Delta candidate over the East. This is not north or South or East issues but the facts and actions of a Minister must consider EQUITY in all action to remove unnecessary insinuations and that is Mr. Danagogo weakness.

Such weakness requires professional training on human behaviour, management skills and public speaking to correct. Nigeria’s Ministers are simply appointed without any means of training them for the roles ahead and that is not Mr. Danagogo’s fault but a true professional knows his/her limit and usually states so at the onset and for that and all recent events in Sports, Mr. Danagogo can only be ranked “E” which is below average on academic grading scale. Have a great New Sporting Year.

I rest for now.