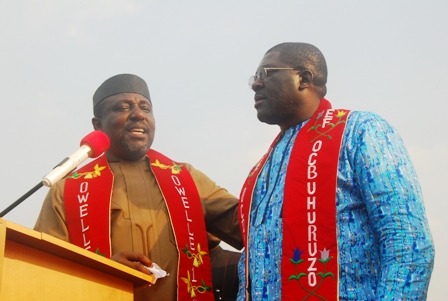 Imo state Governor, Owelle Rochas Anayo Okorocha has told his Deputy, Prince Eze Madumere, Chief of Staff, Sir. Jude Ejiogu, and other senior political appointees in his government willing in contesting the 2015 governorship election on the platform of the All Progressives Congress, APC, to declare immediately, and should not be cowed by him.

Governor Okorocha spoke while addressing leaders and officials of the party and aspirants on the ticket of the party in the state, stating that nobody should withhold his or her ambition because of him, and that every member of the APC willing in the governorship of the state should throw his or her hat into the ring, assuring that there would be level playing ground for all aspirants in the choice or selection of candidates of the party.

The Governor told the party stakeholders that the party would have mock primary on September 1, 2014 which would precede the main primary; adding that the mock primary would be community based because the candidates the party would back in the primary proper would be the persons who got more popular support from the people in the communities that make up their respective LGAs, or state constituencies or federal constituencies or the senatorial zones.

According to the governor, the people at the grassroot must be fully involved and that the party would press for popular candidates that will win elections for the party no matter the zone they come from, charging the aspirants to go home and mobilize and do not hope that anybody would give them ticket through the back door.

Senior Special Assistant to the Governor on Media