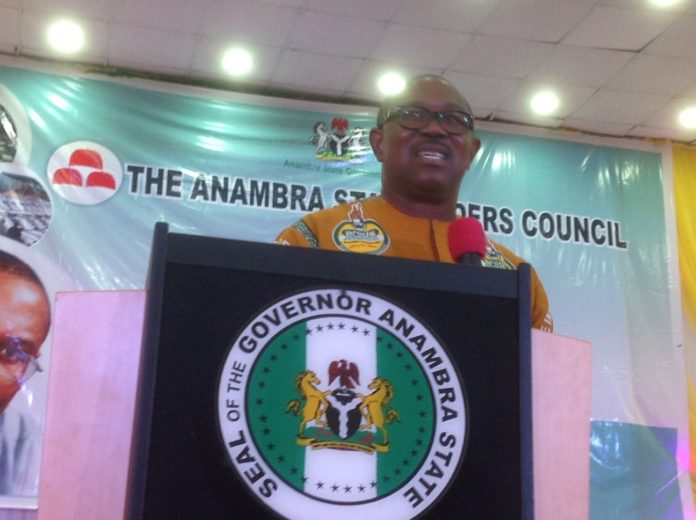 Obi at the grand finale in Awka, Gov. Obi was at his incomparable best …

The 400-page evidentiary report Gov. Obi presented to the people

MC Chido Nwangwu was ebullient and magisterial…
Governor Peter Obi  was at his incomparable best, when he abandoned his more than 15-page prepared speech to render ex-cathdra, his “End of Tenure Report” to the people of Anambra State, at the Women’s Development Centre in Awka. The event was broadcast live nationally on Silverbird and AIT television for three hours.
The opening text of his formal remarks read:
“I stand before the people of Anambra State today to report on my performance in office. This is my duty, because I did not elect myself into office. I was voted into office to manage the human and material resources of our state in trust. Now, as my tenure draws to a close, I must give account of my stewardship, focusing on the impact of government policies, programmes and projects on the lives of the people, as distinct from a mere record of the activities…. The first part of my presentation, which is this introduction I am giving at the moment, explains the broad conceptual and framework under which we managed the affairs of Anambra State. We adopted the Millennium Development Goals, MDGs, using a multi-sectoral approach encapsulated in an implementation vehicle called the Anambra Integrated Development Strategy, ANIDS. This is basically a strategy that allows the State Government to do everything from a holistic perspective, using careful planning, proper budgeting, diligentimplementation, patient monitoring and attention to the feedback the people. The second part of my presentation, which is the longer part, gives a detailed breakdown of the achievements of the government, based on each of the eighth MDGs…..”
Besides the national audience, the occasion was attended by well-heeled personalities, including  Chief Emeka Anyaoku, the event Chair, Business Mogul Aliko Dangote, CME Dr Okonjo  Iweala, Aruma Otteh,  as well and eminent personalities from  Anambra like Igwe Alfred Achebe, Senator Ben Obi, Bianca Ojukwu, Dr. ABC Nwosu, Dr. Chukwuemeka Ezeife, Ikem Odumodu, Hon. Uche Ekwunife, Emma Bishop Okonkwo,  Chief Judge Peter Umeadi,  Justice SN Okoye, Justice Funmi Ofodile, Catholic Bishops Paulinus Ezeokafor,  Valerian Okeke, Hilary Okeke, and Anglican Bishops Alexander Ibezim, Christian Efobi, Henry Okeke, Owen Nwokolo, an Pentecostal BishopmEphraim Ndife and others.
Anambra Governor-Elect Dr. Willie Obiano and his Deputy Dr. Nkem Okeke were also present along Deputy Governor Emeka Sibeudu and members of the top echelon of Anambara State Govenment.
In what was a novelty and well-scripted and directed function, Gov. Obi allayed any fears that he would leave Anambra coffers empty as he leaves office.  Acordingly, he publicly announced what the government balances would be at the end of his administration, saying that there would be some N75Billion Naira in savings for Anambra State, which included some N25 billion in investment for the state.
Broken down, Gov. Obi indicated that of 14 March, 2014, the balances would be N11.5bilion Federal Government approved refund, N10 billion and foreign currency investment of (US$155m) the equivalent of N26 billion.
Alluding to the poor revenue of the state, Gov. Obi disclosed  that it was the conjunction of circumstances, such as the frugal management of resources,  proactive relation with donors and development partners and collaboration with the church that helped him govern well and transform Anambra, especially the education and health sectors, through the ANIDS philosophy and MDGs programmes.
In this context, he disclosed that his government meant had received some N620 Billion and N20  billion respectively from the Federal Allocation and trough the interventions from Donor Agencies and Development partners. this made it possible for his administration to build over 801 Kms of roads which opened up access to rural areas and also contributed to the alleviation of poverty.
Gov. Obi read out a letter from the National Examination Council (NECO) boss, ranking Anambra the top state in the 2013 national exams and having produced the best overall student. Obi attributed his overall successes to purposeful governance, the use of unorthodox but cost-saving methods — one of the three reasons for which he was impeached  — strategic planning, frugal and transparent management of resources, and a commitment to pruning the cost of governance.
According to recent Federal GDP mapping,  Anambra State economy under Gov. Obi grew from some N700 billion in 2009 to over  N1 trillion in 2011. It is remarkable therefore, that Gov. Obi said he accomplished his mission by not borrowing or owing anybody or issuing any bonds.  In sum, Obi told his audience, “We have a country; we have a state that everybody must work hard to sustain.”
Those who spoke at the event, including Chief Emeka , Dr Dozie Ikedife, Aliko Dangote, Ngozi Okonjo-Iweala and Governor elect, Chief Willie Obiano all toasted and commended Gov. Obi’s accomplishments.   Chief Emeka Anyoku said that Obi had brought uncommon transformation to all sectors of the economy. Dangote said that if hitherto we appreciated Gov. Obi 10%, now we should appreciate him 1000%,
Those who watched the event noted the hands-on approach to chaperoning the public event.  The team work was quite evident with Mrs Magaret Peter Obi, SSG Oseloka H. Obaze, Chief of Staff  Stella Chinyere Okunna, Hon. Joemartins Uzodike and the Chief of Protocol Ngozika Okoye all on their toes throughout the three-hour event and visibly giving directives and close attention to every event detail.  MC Chido Nwangwu was his usual ebullient and magisterial self.
The ambience  and conviviality of the event venue and day was said to be unprecedented in Anambra State’s history.  Indeed, the event lived up to Gov. Obi’s mantra of “finishing strong”