Lagos—Factional Chairman of the Nigerian Governors Forum, NGF, Governor Jonah Jang of Plateau State has commenced moves towards wooing estranged governors aligned to his rival, Governor Chibuke Amaechi, he disclosed at the weekend.

The move nonetheless, the Action Congress of Nigeria, ACN and the Congress for Progressive Change, CPC, yesterday, slammed President Goodluck Jonathan for his recognition of the Jang faction of the NGF.

The ACN described the president’s recognition of the Jang faction as a slap on the principle of democracy. The CPC on its part described it as an act of perfidy saying the presidency worked fully to sabotage Amaechi’s victory and followed on by turning the vote on its head.

Jang in a session with newsmen in Lagos at the weekend flayed insinuations he lost the NGF chairmanship election saying that Amaechi rigged the polls as he challenged his rivals to show the full length of the video film of the poll which he said would debunk the claim of a free and fair poll. 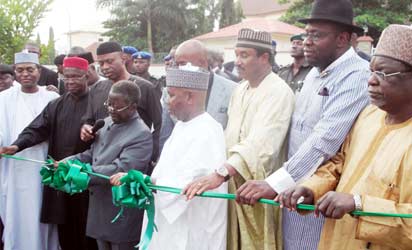 Gov. Jonah Jang of Plateau (3rd R), inaugurating a faction of Nigeria Governors Forum Secretariat in Abuja on Thursday. With him are some Governors and Deputy Governors

“Let them show every body going to vote,” Jang said as he was supported by his colleagues, Governors Liyel Imoke of Cross River, Peter Obi of Anambra and Segun Mimiko of Ondo all of whom flayed the poll as deficient in democratic standards.

Governor Jang nevertheless vowed to win elements in his rival’s camp to his side, saying he would not for the sake of the NGF chairmanship lose his salvation in Christ.

Jang said: “I have now started calling them and even my chairman (Northern States Governors Forum chairman, Babangida Aliyu of Niger State) who would not pick my calls before.”

The ACN and CPC in separate press statements issued by their respective national publicity secretaries, Lai Mohammed and Rotimi Fashakin, flayed the presidency for last weekend’s endorsement of the Jang faction of the NGF.

‘’President Jonathan is frittering away whatever is left of his credibility by the day. His spokesman said in a statement the day after the NGF election that the President has always shown a willingness to work harmoniously with any leadership freely and independently chosen by the Governors’ Forum for the collective progress and development of all sections of the country and will continue to do so.

‘’But it is now clear that the presidency’s statement is not worth the paper on which it is written, that in the Nigerian presidency, words do not carry their exact meanings and that the spokesmen for the President speak for no one but themselves.

When viewed in the context of similar deceitful statements by the presidency in the past, especially on the health of the First Lady, one can see a growing pattern of a lying presidency, a presidency that likes to hide behind one finger. This is sad, because without credibility, a President cannot govern successfully,’’ ACN said.

The CPC on its part said: “The deception did not travel for too long. President Goodluck Jonathan’s endorsement of Governor Jonah Jang as the ‘elected’ Chairman of the Nigeria Governors’ Forum, NGF, has finally removed the wind off the sail of the rigmarole and denials as regards the source of the contrived crisis in the NGF.

“As a Party, we are appalled by the President’s abandonment of the ship of state to cause needless overheating of the polity. The NGF, as it stands, remains a voluntary platform among Nigeria’s governors, with no constitutional function. How the election of the chairman of the NGF captured the animated interest of the President, despite the seeming myriad of issues besetting the Nation State, is still puzzling.”

“This, of course, is another attestation of the President’s besmirched reputation for wrong priorities. Undoubtedly, the President’s conduct in the just concluded Governor’s election is a pointer to the immense electoral incongruities being planned for the 2015 elections.”

“Unfortunately, all the President’s men and women have sworn to obsequious subservience which explains why he is egged on to continue with the capricious politics that is only geared towards exacerbating the overheated Nigerian polity.

We hereby call on the International community to take greater interest in Nigeria’s democracy which, with the President’s brand of deleterious politics, is in danger of peril. We call on the Nigerian people to remain resolute in defending the cause of democracy because eternal vigilance is the price for liberty!”

Help! We Now Swim to Cross to Our Homes —Anambra Community Begs Soludo