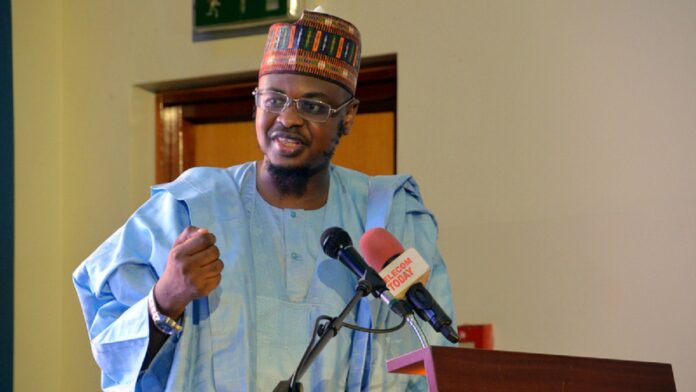 He is known as the priestly pious Muslim whom President Buhari tapped from obscurity into his cabinet as a federal minister of Communication and digital economy. He has since been operating the ministry in a manner that has raised eyebrows among the intelligentsia.

His launch of the program to link the national identification number (nin) with every sim card has gone from theoritical idea that was considered stella to a totally collapsed implementation of the stella idea.

The pantami program has failed and has caused misery to the people of Nigeria. The last few days showed a complete lack of planning and preparation.

The federal minister of Communication and digital economy made bold pronouncement of his nin agenda without ensuring that the NCC server could handle the capacity of Nigerian population. As a result, the NCC server failed to chew gum and walk at the same time.

Because the NCC server has reached near capacity due to increased nin registration and linking to the sim cards, it can’t handle any other load in the server.

So any sim swap or “welcome back” for those whose sim may have been stolen or damaged would not be able to carried out because of the overload on the system. Throughout the country, many Nigerians find themselves loitering at the premises of telecommunications provider seeking to recover their lost or stolen sim or communication network. From Airtel to MTN to others. A sad sight. Unfortunate and innocent Nigerians would wait at the gated premises of the telecoms from morning till night literally begging for their sim card to be recovered.

In return, the foreign owned corporation such as mtn and Airtel maltreat Nigerians as beggers seeking favor. They would lock the gates and refuse Nigerians from gaining access into the gated compound in the same manners destitute are chased out of residences where they must gone to seek favor.

Not minding the ongoing pandemic sweeping across the country, the minister turns a blind eye to the situation created by his mismanagement of the sim nin linkage. People are seem gathered in high numbers without social distancing or even having on their face masks – pushing and shoving to get access into the registration area.

The telecoms find themselves in a bind. They cannot verify fingerprints ti enable them complete the process of sim swap. The NCC server cannot handle the additional task. So they end up telling the people gathered outside their gates that there is no network. And the situation has kingered for over a month without remedy.

When the situation was getting out of hand at the mtn head office in Maitama Abuja because of the agitated populace who had waited over weeks without being attended to by the mtn, the federal minister drove into the office with an entourage of mobile police for his protection. This was on Monday. He did not address the people at the gate.

The people, Nigerians, waiting at the gate as refugees begging for relief, just stood at the gate leaning and shoving each other to get a glimpse of the insides of the office. It was a sad sight.

In the meantime, the federal minister is off to launch another campaign. He is launching a project that will replace BVN with nin. This is while his nin project continues to wreck havoc.

Those familiar with the workings of the communication ministry allege that the impetus towards the nin project is money. Selfish interests of highly placed individuals within the leadership structure of the ministry who are focused on depleting the large budget earmarked for the nin exercise.

It is truly sad.