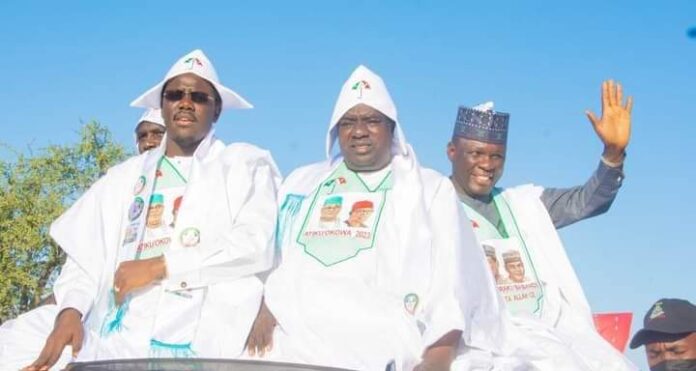 Birniwa town in Birniwa LGA of Jigawa state on Wednesday, December 14, 2022 was filled with PDP, members, supporters,  stakeholders and who is who in Jigawa politics as a former governor of the State, Senator Ibrahim Saminu Turaki flaggs off campaign of the gubernatorial candidate Alhaji  Mustapha Sule Lamido (Santurakin Dutse) that of the Senatorial candidate Dr. Nurudeen Muhammad. Dr. Nuruddeen Is contesting for Jigawa North-East in the 2023 general election .

Turaki’s flagg off of Dr. Nuruddeen senatorial campaign can be link to a ‘political system’ standing on a tripod – Firstly, Dr. Nuruddeen and Santuraki are products of the Sule Lamido school of politics- development to people, human capital development, mentoring others to grow politically and consistency in political views. Secondly, Dr. Nuruddeen is a political son of Sule Lamido. Thirdly the Jigawa PDP campaign for all the offices are inter-connected and running as one.

Dr. Nuruddeen has shown to the Jigawa people that his politics is indeed a product of the Sule Lamido’s school politics. During the reign of Sule Lamido as governor of Jigawa state, he brought development in all the sectors of society- economy, infrastructure, healthcare, agriculture and rural development, human capital development, political awareness and helping other to grow.

Dr. Nuruddeen is a true representative of the Sule Lamido school of politics. He has touched the lives of many peoples when he was minister of state foreign affairs/minister of information and after leaving the office- his Sawaba FM station based in Hadejia town of Jigawa state has employed many Jigawa people, he has helped communities and young people to improve their lives and become something in the society.

Dr. Nuruddeen is in the forefront of helping communities through his Unik foundation on scholarship, helping the needy, tree planting and medical outreach.

One important thing is his care, concern, devotion and commitment given to the victims that were ravaged by flooding- he has provided empty sacks, food items, healthcare outreach, arks and building material to many communities in Jigawa state especially in his senatorial district, Hadejia.

Dr Nuruddeen Muhammad recently said “Unknown and isolated by circumstances of environment, poor governance and suboptimal representation, the Takazza community in Guri local government area of Jigawa is a protype in the misery that afflicts many others in the North East zone of the State. Just recovering after it was cut off by a massive flood barely three months ago”.

Dr. Nuruddeen further said “ Modern management of perennial floods and frequent breakdown of law and order occassioned by climate change, availability of forest resources, fertile land and water would need a more advanced political value system and culture with the capacity to seamlessly network itself within the wider national and global security and environmental resource framework and consciousness”.

With Santuraki as governor of Jigawa state, Dr. Nuruddeen as senator northeast, former Jigawa state governor, Alhaji Ibrahim Saminu Turaki  as Jigawa Northwest senator and former Rep, Alhaji Mustapha (Zannan Dutse) as Jigawa central senator including other PDP candidates, Jigawa will return to the days of the reign of Dr. Sule Lamido- development to all communities, human development and true representation at all the levels of society- no one will be left behind.

Yes, with young minds, fresh ideas, intellectual persons, selfless people, dedicated and committed individuals like Santuraki as governor and Nuraddeen as a senator to will come to believe and be rest assured that the future is bright, things will change for good and the society will be taken to a greater height by the special grace of God.