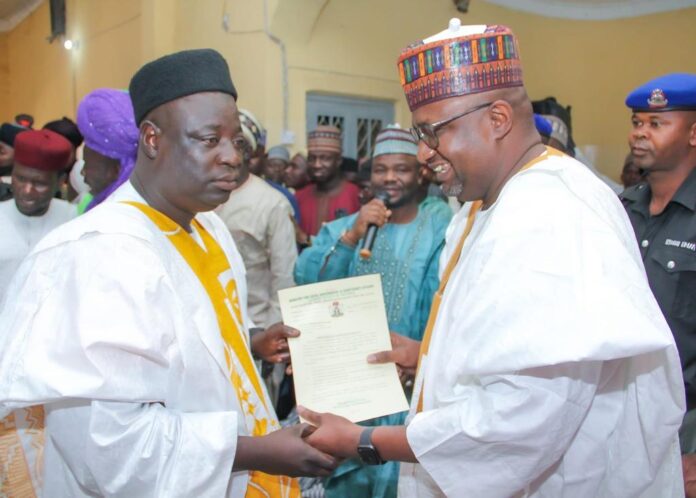 The appointment was contained in a letter signed by the Commissioner, Ministry for Local Governments and Chieftaincy Affairs, Alhaji Ibrahim Dasuki Jalo.

According to the Commissioner, the appointment is in the exercise of the powers vested in the Governor under the Gombe State Chieftaincy Law 2022 and based on recommendations of the kingmakers of the Funakaye Emirate Council as well as due consultations.

Hon. Dasuki, while presenting the appointment letter to the new monarch at the Emir’s palace in Bajoga, Funakaye Local Government Area, charged the royal father to embrace all and sundry in his domain and build on the legacies of his predecessors.

He said “Almighty Allah has chosen Yakubu Muhammad Kwairanga as the next emir of this blessed Emirate from among many other eligible candidates from the royal family , as such  I am appealing to the entire Funakaye Community to support and rally round the new monarch.”

He assured that Governor Inuwa Yahaya led administration will continue to accord special recognition and respect to the traditional institution in view of its role in the maintenance of peace and social cohesion.

While wishing the new Emir a peaceful reign, the Commissioner said the coronation and presentation of staff of office to the new emir will be held at a later date.

The newly appointed monarch is a younger brother to the late Emir Muazu Muhammad Kwairanga  III who died on 27th August,  2022.