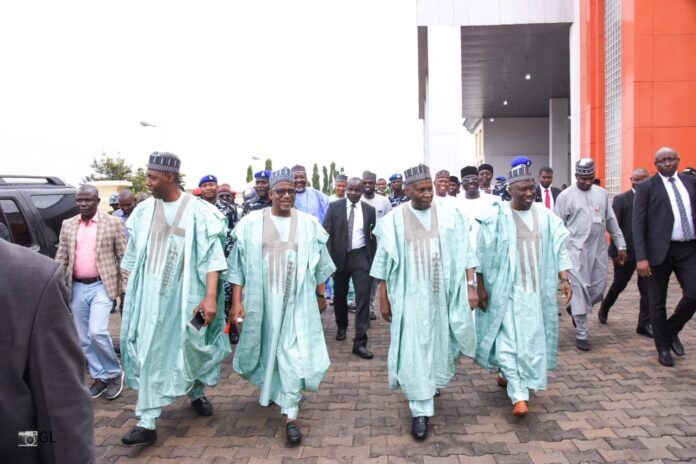 North East Governors Forum has called on the federal government to capture the construction of interstates roads within the Region in the 2023 budget, and they expressed their intention to establish air transportation company .

The Chairman of the forum and Borno state Governor, Professor Babagana Umara Zulum said this at the opening of the 7th North East Governors forum’s meeting in Gombe state, which was attended by the Governors of Adamawa,Bauchi , Borno,Gombe, Yobe, and representative of Taraba State Governors are attending the meeting.

The Governor called on Members of National Assembly from the region to ensure the inclusion of the projects in the 2023 budget.

Zulum, said that constructions of mass road network within the region will boost commercial activities and facilitate the movement of farm produce.

The chairman commended President Muhammadu Buhari and the Military for intensifying effort in the fight against Boko Haram,

He said the effort yielded positive result, owing to the number of insurgents surrendering daily.

Professor Zulum, said the desire of the forum is to achieve sustainable peace and security in the region,

He said they are collaborating with relevant stakeholders such as the Northeast Development Commission to achieve sustainable peace and development.
The Chairman of the North East Governors, Governor Babagana Umara Zulum, said that preparations are underway to create a North-East Airline.

He said that their meeting will focus on issues related to security, solving the problems of Boko Haram, kidnapping, global warming and the challenges of floods and other important issues including the creating employment opportunities to youths and poverty reduction.

GovernorZulum said that the forum has successfully established a working relationship with the Federal Government through the North-East Development Commission. the World Bank, and other partners to create job opportunities for the youth in the region to fight poverty, youths restiveness.

The host, Governor Alhaji Muhammadu Inuwa Yahaya of Gombe state, hoped that the meeting would lead to the achievement of important issues that would help the region and its people.

Yahaya said the 7th meeting will enable the governors to reexamine the successes recorded since after the establishment of the forum and their first meeting was in Gombe State.
He Commended the North-East Governors for sustaining the activities of the forum which is yielding positive result towards addressing socio economic development problems in the region.
Governors of Adamawa,Bauchi , Borno,Gombe, Yobe, and representative of Taraba State Governors are attending the meeting.